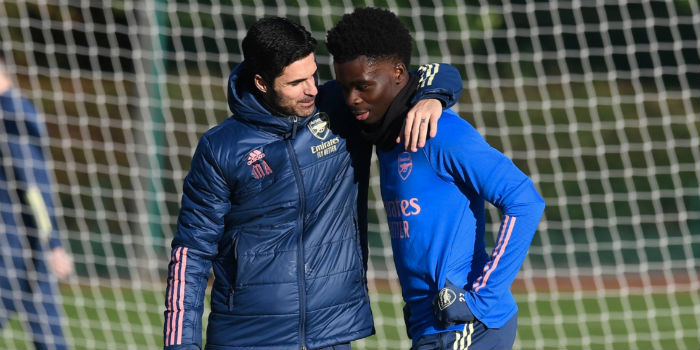 Arsenal will make a decision on Bukayo Saka’s involvement versus Olympiacos later this afternoon but it sounds like he’s on the mend after tweaking a muscle at the weekend.

The England international was forced off at half time of Sunday’s north London derby with a hamstring issue and was replaced by Nicolas Pepe.

Facing the press on Wednesday, Arteta said, “He was doing another test [today]. Obviously, he felt something muscular. He’s been feeling a lot better. We’ll make a decision this afternoon about what we’ll do.”

The Gunners come into the tie with the luxury of a two-goal advantage but after last season’s exit to the Greek outfit it sounds like the manager won’t be taking too many risks with his starting lineup.

Asked about any other injuries, he added: “Everybody is more or less ok. A few doubts, but hopefully everybody will be involved.”

The boss was also pressed on the decision to drop Pierre-Emerick Aubameyang for disciplinary purposes and whether there were likely to be any further ramifications.

“We talked, everything has been resolved in a really positive way so we move forward,” he said.

He also dismissed talk about stripping the striker of the captaincy after he reportedly arrived late for the team bus on Sunday.

Don’t play Saka. Or Tierney. Thanks.

Or Partey. I think Tierney will play, but if he doesnt do we go with Bellerin and Chambers?

Meant to say Bellerin and Cedric.

Partey looks like he needs the sharpness of some games. I’d give him 60mins here. Xhaka could probably use a rest and Mo fits well with Partey. I’d be tempted with some Mo’ Partey time here.

Remember, there are five substitutions available. Play Partey for as long as he needs (assuming we still have the tie in hand).

We have more than enough to get through to the next round if Pepe and Willian started tomorrow night, so if it means he’ll be even fitter for Sunday I hope he’s rested

Can’t see Arteta playing Pepe, Martinelli, and Auba all from the start, and I assume Auba will start.

We can beat Olympiacos without Saka. Rest him.

Saka shouldn’t be closer to this game than the bench, we should be able to close this out as pros now

Should being the operative word, but yes, you’re right.

With Olympiakos needing 3 goals, he shouldn’t be risked. Perfect game to play Pepe and Martinelli. They will have to come at us and Pepe, Martinelli and Auba up top could carve them to pieces on the break:
Leno
Bellerin-Luiz-Gabriel-Tierney
Partey-Xhaka
Pepe-ESR-Martinelli
Auba

Press them with the front 4 and sit relatively deep with the other 6 outfield players. Might be a game to rest Xhaka, Elneny would be perfect in that setup too.

I very much doubt Luiz will start, that would be 3 games in a week for the old boy.

Am I missing something? Did Mikel get sacked? Just checked and no he didn’t. Thus, Luiz will start.

Surely this (and potentially Sunday) is one for him to start from the bench? 2-3 weeks of minimal football could be exactly what he needs considering his age and the shift he’s put in these past months

Rotation up top is clearly needed, given the amount of football we will be facing in the next 2 months. Rest Saka, give game time to Martinelli, Pepe, ESR, even Nketiah or Nelson, and keep Auba and Odegaard on the bench?

Same for the rest of the team, Xhaka and Tierney could use a breather. Partey and Gabriel, on the other hand, need to play to keep increasing their match fitness.

Please don’t risk it if it’s borderline! With the right concentration levels, even without Saka’s talent and importance to this team, we should be ok.. he says!

Would hate to loose him for a period of weeks!

All sounds positive though.

Are we expecting a pre _Olympiacos podcast this afternoon does anyone know?

Is the downvote a no or just didn’t like me asking about the podcast?

That’ll teach you for asking about podcasts.

Mondays, Fridays, exceptional circumstances.., this isnt one of those. No doubt they will discuss the match on the Pod tomorrow

Olympiacos are very unlikely to score 3 no matter how we line up. And what small risk there is worth it to keep our squad healthy and some semblance of competition. We hit a wall in the final 15 vs Spurs

Use it as opportunity to play players who are short of game time – Chambers at CB, Martinelli, Pepe, Ceballos, Mari/Holding, maybe even Ryan

It doesn’t need to be pretty, they just need to qualify without stressing me out too much

I dont see why mat cant take his place or pepe so he can rest ,until it becomes thats when we will learn .mtcheeeeww

I mean until it become worse

I love what Mikel said about national teams doing what Arsenal tell them with regard to our players on international duty, “It’s true that we have some players with some significant loads there, but our priority now is to win these next two games and then whatever happens with international duty. If anything, they will have to adapt to what we want. We’re not going to do it the opposite way around because we are the ones that have to look after our players here every day. But at the end, we’re the ones who pay our players so if… Read more »

Well we’ll see about that. Perhaps another fight Mikel did jot need to have publically. Better to sgree quiet areangments with national coaches then throw the gauntlett down at them

Play it safe we’re up 2 goals against olympiacos. Just hoping that doesn’t mean arteta will play willian and give martinneli more reason to be upset

Given we have a reasonable lead (famous last words), I’d give him a well-deserved rest. We have to rely upon other players more or we’ll exhaust the ones such as Saka.

We have a squad. OK, it’s probably not got the strength/quality in depth that we need yet but MA has to trust other players to “do a job”. If they can’t, then we’ll have to see if they can be offloaded in some way or another in the summer – although I doubt we’ll shift many.