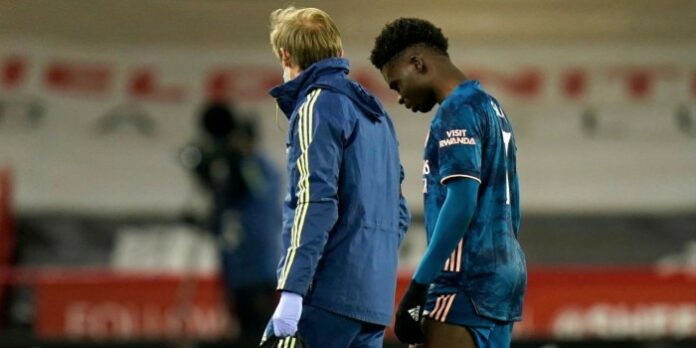 Mikel Arteta says he’s unsure if Emile Smith Rowe and Martin Odegaard will be available for selection when Arsenal travel to Prague later this week and he’s also sweating on the fitness of Bukayo Saka.

The England international went down injured in the second half of Sunday’s 3-0 win over Sheffield United and had to be replaced by Willian. The teenager had been tasked with the number 10 role at Bramall Lane with Smith Rowe and Odegaard left in London to nurse ankle injuries.

With Pierre-Emerick Aubameyang feeling unwell and Kieran Tierney and David Luiz sidelined by knee injuries, the boss had little choice but to reshuffle his pack. He may have to do more of the same in the coming days.

“Bukayo has the ability, the capacity and the intelligence to play as a 10 in those pockets,” said Arteta in his post-game press conference.

“We prepared it for this opponent and as well with the players we have available, and at the moment we’re missing five or six big players. We had to adapt some positions and I believe it was the right choices.”

Given all his players were fit just before the Interlull, Arteta was asked if he feels unlucky at the sudden influx of injuries.

“Yes,” he said. “I don’t know the extent [of Bukayo’s injury]. I think for certain David will be out. Kieran will be out and then with Martin, we don’t know yet. Bukayo, we’ll see how he develops in the next few days.

On Saka’s problem, he added: “He had to come off. He had discomfort in his thigh and it’s the last thing that we need because we’re missing some big players at the moment and we don’t want to lose another one. Hopefully, it’s not that serious.”

While he couldn’t speak in definitive terms, he was also hopeful that Smith Rowe and Odegaard might recover. “I want to think yes but if I’m honest, I don’t know,” he said before sharing his assessment on captain Aubameyang.

Quite right. It’s the game of the season (so far, let’s hope there will be others following it of course) as our season rests on success in the EL. However, as you say we need to ensure anyone playing is fully fit. Imagine a scenario where we play someone (Saka in this case) who isn’t, we win the tie but lose him for the semi-final with goodness knows what outcome.

I would take winning and losing him for the semi

I didn’t know we had up to 6 big players but then after a good win, I do.

All these injuries to key players, and all happening within roughly a spate of a week? Yes, you bet we are feeling unlucky

Yes but with several of them we played players who were already carrying knocks/half fit. Odeegard hurt his ankle during international duty & we risked him for the Liverpool game, which didn’t work. Saka has been nursing an injury the past few weeks. Tierney has had some injury issues this year (and in past years) but it probably doesn’t help that we play him even if he’s half fit in a year where we’re cramming in so much football following a summer with no real break.

Play the same team (hopefully with Saka) as yesterday. Defence was solid, Mari and Holding are a good partnership, Ceballos and Pepe did well.

Definitely don’t switch much around (eg Willian) unless absolutely necessary.

Ceballos was employed as a left sided CM and looked a completely different player.

he was playing against a very bad team. he definitely has a lot of ability but he dwells on the ball far too long and takes way too many unnecessary risks. i wouldn’t start him in our most important game of the season.

Slavia aren’t much better or worse than Sheffield. Ceballos can take the game to them in the right setup. He just can’t play double pivot. I say we stick to what we got right against Sheffield. We have the players to destroy Slavia but it’s the coaches job to keep the lineup balanced and he failed to do that Thursday.

They may not have looked great on Thursday but they are much, much better than Sheff Utd.

I wouldn’t want to line up Xhaka at left back against Slavia. Their wingers are much more threat than Sheffield.

It looked like a dead leg, there was a replay of a challenge where he was kneed in the thigh. Fingers crossed for Thursday.

If Saka, Ødegaard and Smith-Rowe all miss out or don’t start, our options at 10 will be Ceballos, Willian and Lacazette (if Aubameyang is playing). Clearly not ideal, but not a total disaster either.

Unfortunate at the business end of the season 🥴

Maxin In The Shade
Reply to  Tony Modra

You’re not named after the former Crows superstar by any chance?

It was a good sign to see Bukayo on the field, shaking hands and patting backs (even sharing a bit of banter with Aaron Ramsdale) after the full-time whistle. He was wearing a mask but you could see a big smile on his face. Not the behaviour of a guy who thinks he’s picked up a troubling injury.

Saka is another level.. so so intelligent

If we can just get two of Him, Smith Rowe or Odegaard for Thursday I’ll feel a lot better about it.

two of Saka would be great

If a player has even one GCSE, they are probably called “The Prof”:-)

at… holding up the ball or growing a beard?

Let’s just pray he doesn’t shoehorn both in.

In the short term it’s crap news but in the long term, maybe a blessing in disguise?

I’m sure many of us can remember clearly the last generational teenage prodigy we flogged into the red zone.

It was basically downhill from the age of 21 for Wilshire’s career.

We can’t let that happen with Saka, at 19 his bones are literally not even fully fused yet. Protect him at all costs.

Different style of player – Jack seemed to invite a challenge by holding onto the ball just a little too long. It was part of what made him unpredictable.. but also part of what got him injured. Ill just go back and rewatch that Barcelona game to remind myself how good he could have been. Ahh.. between him and Diaby.. what could have been.

-and let’s not forget his penchant for committing to 30/70 challenges. Several of those led to time on the treatment table. Both technically gifted. Very different playing styles.

We really need some luck on the injury front. Not only do we need to win in Prague this week but for a realistic chance to save the season by winning the tournament I think we need all of Saka, Odegaard and ESR to be healthy if we get to the final.

You’re not kidding. However, 40% of our league points have come in our 6 games against the Premier league’s bottom 5 teams. Let that sink in…This team is so average it is frightening.

I would not be sweating on Saka. I mention several games before he does not look 100% fit. It would be extremely foolish to push him at this point rather than allow him to recover. Hopefully one of ESR or Odegaard (or both) are fit for mid week. Pepe should continue right side as with Laca IMO (bar any tightness issues). Some players have a need to set things right from first leg.That should be motivation. I’m a bit ambivalent on Auba at the moment and would play him left but the issue would be if he covers enough going… Read more »

Bellerin – I like to see better from him. A pale shadow of what he once was when he first broke through. Its it a given that we should sell him. depends on money tabled IMO this summer. If not it may not be a bad thing to keep him on for a bit, have Cedric cover Tierney and chambers in mix on right side. It would solve our issues having to bring in a fullback in addition to many other areas we need to address (on a very likely LIMITED budget) Of course if the money (from say Barca)… Read more »

…Mari. Put in a great shift at Cback. I don’t see his involvement midweek simply on a) fitness b) depending if Auba is playing left side attack, cover would be better with the pacier Gabriel c) I think we have to consider whether there is any ability for BOTH Mari and Gabriel to play in tandem both being left footed. To me we (should) have to pairs sans Luiz (who should not be renewed) a) Gabriel and Holding (Quick left/Tall right) b) Mari/Saliba (Tall Left/Tall& Quick Right) But a lot will have to do as well with Saliba’s development and… Read more »

So when City wanted Alexis Sanchez, why did Arsenal try to sign Thomas Lemar instead of going back for Mahrez? He ended up going for less than we offered for Lemar.

I really still cannot understand Mr Blog’s obsession with getting rid of lacazette. He gets a goal every 2 games, never been a problem, etc

I think it’s more to do with the fact that he’s got a year left and the choices are to extend his contract, sell him or let him run it down and move on a free.

Yep, the club needs to be better at making these tough decisions. However, I do have some sympathy for the club. If it wasn’t for Covid, I think we should have been able to make back what we spent on Auba and Laca. As nobody has any money, it has made the potential sales of the two of them unattractive. Getting good money for them and reinvesting would have been ideal. I think the club have been making scared decisions since the Ozil and Alexis debacle, though. The brave decision is to say we can do well without the player… Read more »

Yeah Great performance against a poor Sheffield team. But the effort was there to see. What a ball from partey. Big game Thursday. Got to finish our chances this time. Bring on Villarreal 😎😎😎

What why the negatively???

Only 23 comments so far!