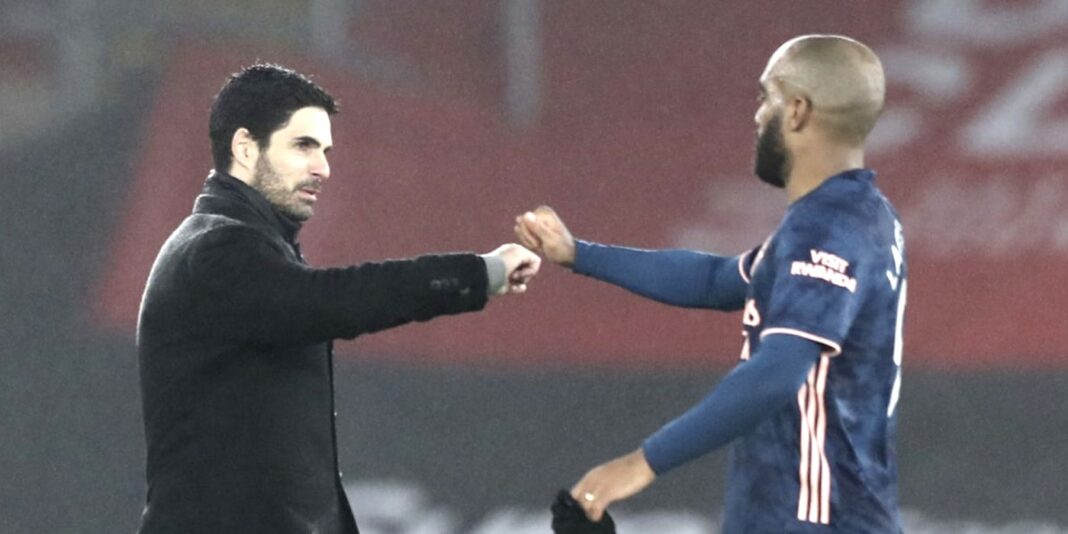 Alexandre Lacazette’s recent form has led to speculation about his future, with links during the international break to clubs like Sevilla and Roma.

With 12 months left on his deal come the summer, that kind of speculation is inevitable, but Mikel Arteta says he’s happy that the Frenchman is generating interesting because it means other clubs are paying attention to good performances he’s producing for Arsenal.

“I’m always like it when people speculate about our players,” said the Arsenal boss, “because that means they are doing well, and they are getting attention.

“I think he’s been in really good form for months now. He’s sustaining that level, he’s scoring goals and he’s providing the team with something different as well.

“His work rate has been phenomenal, and it’s what we want. We need those kind of players hitting their best level, because over the course of the season we have been missing goals and that creativity in the final third.

“We need those players to step in and make the difference.

“The situation with Laca, we’ll address in the summer speak to him, and propose the future that we want, that’s it.

“Now I just want the players focused and only focused on performing, getting the best out of themselves for the team.”

What happens between now and May will go some way to deciding the striker’s future. It remains to be seen if Arsenal will have European football next season, and using resources to hang onto a player of 30+ may not be wisest idea.

It’s something Arteta acknowledged, saying, “Everything is related to where we are, how much we win and where we are playing next season.

“There are no exceptions, and we all need to be clear with that.”

Man the irony is his best mate Auba ain’t doing him a favor with his lackluster performances lately interms of the club giving out 30+ players a contract, Unfortunately now the club heirarchy will play hard ball with him.

Don’t think that’s unfortunate. If anything that should open the management’s eyes and be wary to give contracts out for 30+ attackers. Defence and midfield can still work 30+ but attackers need the energy and speed and workrate (unless they are target men but still)

Even if Auba was pulling up trees we should still move on. Otherwise we’re probably looking at close to 850 thousand pounds a week on forwards /wingers in their 30s. I like Laca but he hasn’t been a clear upgrade on Giroud. Hard working link up players who score 10-15 goals a year aren’t nearly as hard to find as pure goal scorers. Add in that playing Auba centrally allows us to get Pepe and Martinelli more involved. This will get a lot of downvotes but selling Laca is an absolute no brainer as we need the funds to add.

No downvotes from me, cashing in on Lacazette makes a lot of sense.

Selling Laca is only a ‘no brainer’ if we keep Auba… but there are rumblings that we may listen to offers for him. Wouldn’t be too surprising if part of the plan with signing him to a new deal was to protect his value and although Auba claimed he was convinced to stay because he could “become an Arsenal legend” perhaps the real story was “sign on for 3, give us another year so hopefully transfer values bounce back, and we’ll sell you to your dream club” or whatever

So if we move on from both we have Saka/Pepe/martineli & don’t replacement that gives us a young dynamic front 3. Plus a huge chunk of wage bill available. That’s not a terribly outcome IMO. If we do that then we desperately need rid of Willian as well

I really like Laca, and I always have. I was excited about signing him and I think his work rate is phenomenal. I think a bit like Giroud we will look back a little wistfully at Lacazette when he eventually goes elsewhere. A proper professional who never complains.

I like his attitude and work rate, sadly unlike Giroud he doesnt score many goals.

Giroud didn’t exactly score ton of goals for us either.

Actually 105 which is better!

Giroud 105 in nearly 7 seasons; Lacazette 61 in nearly 4 seasons. Not completely chalk and cheese…

Not sure about the last part. At many times he sulked when things were bad. He also had that spoiled kid face when AW would sub him out.
Granted, in the last year or so he’s improved his attitude a little bit. But overall if he’s to leave this summer history will judge him as a downgrade from Giroud.

It was pretty odd how he’d get the hook after 70 minutes every single time, regardless of whether he looked tired or how he was playing. It was like that rumour doing the rounds where we’d have to pay Saints more money if AOC hit a certain contractually-agreed number of minutes

Can you even imagine how many goals Giroud would score in this team? A thousand near post flicks from Tierney low crosses, he’d feast

I’d prefer to see him leave gracefully on a free next summer rather than sell him or to negotiate a new contact with him this summer. I feel he’s got one more good year in him and so an extension beyond that seems a risk. Better to be open and agree not to extend to avoid uncertainty and speculation in the following season like we’ve previously suffered with other players. Also think it will be a win win for both parties because the player will be motivated to perform at a top level to get interest from the best clubs… Read more »

We’d be mad to do that. He’s worth around 20 – 25 million on the current market (transfermarkt estimates 31 million, which seems high given the contract length). So factoring in wages, we’d be foregoing 25 – 30 million pounds just to get another season from him. You’d need Messi level performances to justify that!

I’m a big fan of his but nobody is going to give us £20m for Lacazette then pay him good wages for 2-3 years.. I’m not seeing many comments here suggesting we should give him an extension for 2-3 more years and it wouldn’t cost us £20m to do so.

If we sell him it’ll be for £10m if that. I’d rather keep him for one more year for what it’s worth and hopefully Gabi is good enough to take his place from him next season.

Yea to me it provides a perfect platform for martinelli to make the CF position his own. If you ask me it’s better value for arsenal to keep laca for one year and replace next year than give him a new contract on wages he most likely won’t justify in a years time or to sell and try to replace him this summer when there are other positions like RB and CM which need more attention and resource put towards.

Yeah, no. I’d prefer him to leave for a bunch of money, gracefully or otherwise.

It will be a tad ironic if Laca is sold in the summer (which I think he probably will be) given his recent good form in contrast to the difficulties that Auba continues to have. If he is sold I fear we won’t get as much as some think as there’s now only a year left on his contract. This is a scenario that I understood the club was determined not to repeat given the problems its caused with several players over the years. Anyway, we’ll have to see what happens.

I could see a one year extension if the salary was right and no one came for him offering us money. If we are going to acquire any players this summer, we have to sell players other teams value. We have a lot of players of little to no value.

You’re right about selling to buy. Some Gooners on this site have produced lists of players we should offload this summer, along with what we “should” get for them. While the lists are a reasonable reflection, the valuations are, in the main, totally OTT in my opinion. Everyone will want to offload even more players than usual this summer to cut costs but, thanks to Covid against a background of less money than usual to pay for them. That’s not a formula for high prices.

Personally I’d be very happy if someone signs him and we could have Martenelli as a frequent player on the roster. Of course auba playing very poorly will make Arsenal less inclined to give laca away

I think Laca is the type of player Arteta requires to play striker in that he has a variety of tools in his bag. Link up play, work rate, can hold up the ball, and scores goals.

As good as Auba is, he’s built for counter attacking football, which is why he scored bags of goals last year (ditto at Dortmund). He’s an incredible finisher as well, but if he has his back to goal, or is deployed out wide, he’s completely blunted.

Has it all gone quiet on the Balogun front? I wonder if he’d sign a new deal if it was set in stone that Laca was leaving.

No more news I think. It doesn’t bode well for him staying (although I hope he does).

Not sure if this is another April fools Day prank

I’ve nothing against Willian as a person , but does anyone at Arsenal get the phrase “ one rule for one and one rule for another “?
Talk about undermining themselves……

I really like Lacazette – I was very happy when we bought him, and he’s still one of my favourite players for how he works and play style, but he never really hit the heights in the Prem that he did with Lyon. It’s always been a bit up and down-y with his form. I think looking at other big sides in the league and around Europe, we’re one of the few teams with 2 genuine seasoned, experienced, goalscoring strikers (obvs the ‘Auba on the left’ thing is still a thing, but I do think his best position is number… Read more »

If you could combine Auba and Laca you might have the perfect CF. Part of me thinks Lacazette is the better option there because of the greater variety in his game, but a deal doesn’t make sense when we have Auba and Willian on the book as well.

Would you sell Laca to City for 50mil? They need a striker to replace Aguero, if they dont get Haaland/Mbappe I have a feeling Laca is one of their options

I wouldn’t trust your feeling on this one.

Fair enough, I prefer not to sell to a same league team anyway. Where do you guys think he will en up at? Spain most likely?

If us Arsenal fans aren’t even talking about giving him an extension, what makes you think someone would pay good money for him and then give him 2-3 year contract on top of that?

Sell Laca and Eddie, they’d fetch about, what, 15-20 million apiece? Buy an up-and-coming modern striker, use Martinelli more, and stick Auba in the middle.

Auba’s form is more to do with our playing style. The system clearly needs a striker who can connect the gameplay and we don’t seem to ping the ball behind for him to run anymore..