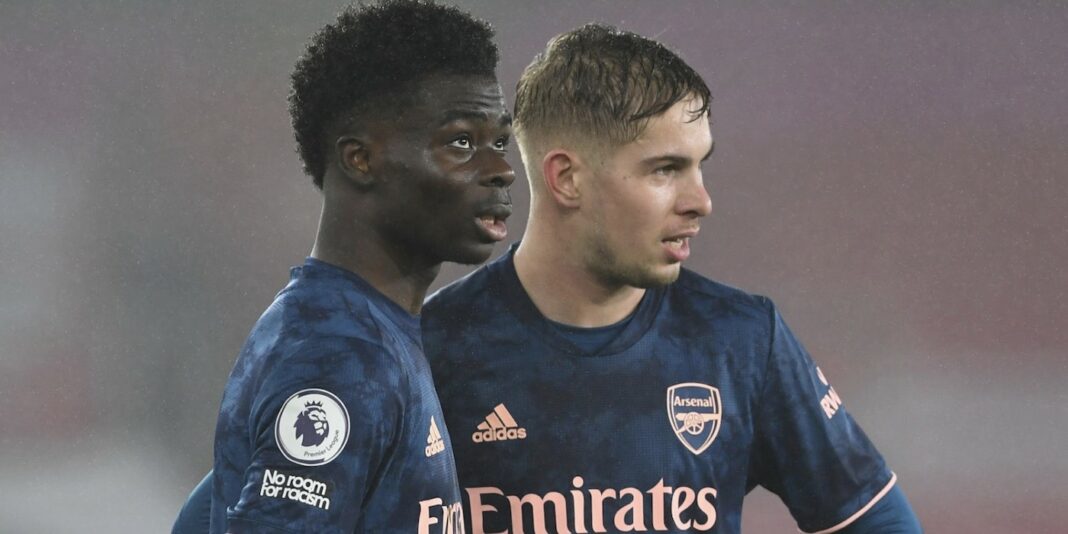 Mikel Arteta says that Bukayo Saka has yet to return to full training following his withdrawal from the England squad due to a hamstring strain.

The 19 year has been dealing with the issue for a few weeks now, and it looks as if his participation in this weekend’s Premier League encounter with Liverpool is in some doubt.

Asked for an update on his fitness, the Arsenal boss said, “Well he hasn’t trained with the team yet. He’s been doing some individual work. We had to pull him out of the England squad unfortunately.

“He’s feeling better, but he hasn’t trained with the team yet.”

Arteta also revealed that Emile Smith Rowe will be assessed after he was left out of England’s U21 European Championship defeat to Croatia.

“He has some discomfort in his hip, that’s why they kept him out,” he said.

“We’ll will see today how he comes, speak with the doctors and the physios see if he’ll be available for training tomorrow.”

As for the rest, it’s a case of fingers crossed, but so far it seems there haven’t been any reports of injuries.

“Well, there’s still a lot I haven’t seen yet,” said Arteta. “We will see them this afternoon, assess the squad tomorrow, see how everybody’s feeling, and make some decisions.

We need all three of them, hope they are OK.

Genuine left sided competition for Tierney this summer is a must

This afternoon might be too quick because of all the travels. I think they will see the signs a bit later, after supper maybe

We all knew Saka was being overplayed. Dont know why Arteta isn’t taking any flak for it. He clearly overplayed him. This injury is on him. I fear Saka will fail to make the England squad for the Euros and also be burnt out for our run in. I’m sure his suitors will be very willing to point out this mismanagement to him when they inevitably come for him.

We all knew saka was being given all the chances he could to develop and become a great player.

taking him out of England has given him a rest.

please go have a snickers or something to break the pessimism

Arteta dropped Saka at the back end of last season

No doubt if Arteta rested Saka and we lost, that would be Arteta’s fault as well

Actually, Arteta has been way better at player rotation than Emery or Wenger. Saka has been left out of many games. So has ESR, HB and even Tierney. The way I look at it is people are on the bench and not starting in PL games. Most other managers have a list of players that are never on the bench if they are fit.

While this is a bit too harsh and overly pessimistic, I also think that there should have been more inclusion and rotation between Pepe and Saka, as Pepe has deserved it. Also, if Nelson had been used a bit more the burden on Saka would be lower. These are the ones I would have liked to play more, so this us the criticism I have for Mikel. I am intentionally leaving Willian out of this as I’d prefer for him to have been left out of the squad bus on matchdays, told different time for travels and given some other… Read more »

We can start Pepe on the right.

Didn’t England beat Croatia? Or was it the fact they are out of the competition?

I wish Arteta was trolling us with an April fools. A fully fit Saka and Smith-Rowe I really feel like we have a great chance to beat Liverpool.

Without them – I guess the front four would be Pepe – Odegaard – Aubameyang, and Laca at #9 – still pretty good.

Was hoping we could have a really good go at Liverpool as I think we still have an outside chance of top 6. Staying injury free will be crucial to that

Rest most of the squad. We don’t care about this game let’s concentrate on the Prague game. Win this cup and go into the champions League 😎. Eggs in one basket? YES. Forget about the league