Danielle van de Donk scored her first WSL goal since October in the 4-0 victory over Bristol City this weekend. In that timeframe, she has scored five times for the Netherlands and following the February round of internationals, she told Dutch journalists she had “more freedom” playing for her country, where she plays in an advanced midfield role with Jill Roord utilised as a wide forward.

Last week, I pointed out that DvD notably took more scoring positions against Spurs, often running ahead of Jill Roord to get into the penalty area. I asked Joe Montemurro about this after the Bristol City match and he confirmed that getting van de Donk into advanced positions is something they have worked on specifically.

“We’ve been working a lot on opposite areas so we get Kim to come ball side and Jill starting a bit higher and that allows DvD to run in from the other side. It just opens up one side for us to build and what that does is it cuts two midfielders out with one pass. Jill starts higher up, DvD rotates underneath and we get into those areas, so it is deliberate. Especially against teams that play like this and we have to pull them out of central areas and it’s worked quite well.”

Let’s take a look at how this worked against Bristol City, where van de Donk started nominally on the right of the midfield three but with license to drift towards the centre as moves progressed, usually down Arsenal’s left. The Gunners constantly looked to build play on one side, attracting Bristol players over to one side before quickly switching.

Look here as Leonie Maier progresses down the left, causing all of the Bristol players to shift over. Montemurro also told me that he wanted to play right footed Leonie Maier at left-back to create central overloads and this is also a good example. Maier pushes the ball in-field to van de Donk who, as you can see, is already looking over her shoulder to see if she can switch player to the other side of the pitch. 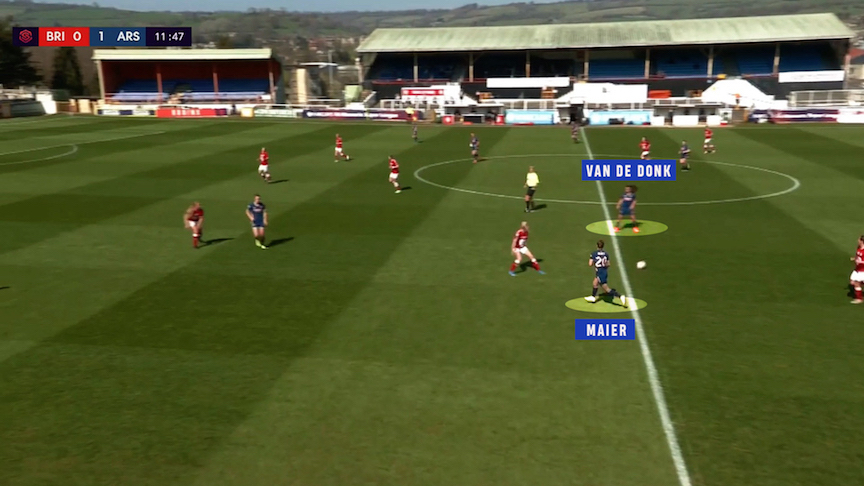 DvD initially feints to pass to the left where Miedema is running the channel before playing an excellent pass to Roord on the right. Look at where Maier is standing now, in-field as another midfielder, taking another Bristol player’s attention and preventing her from closing the gap that is emerging on the right. 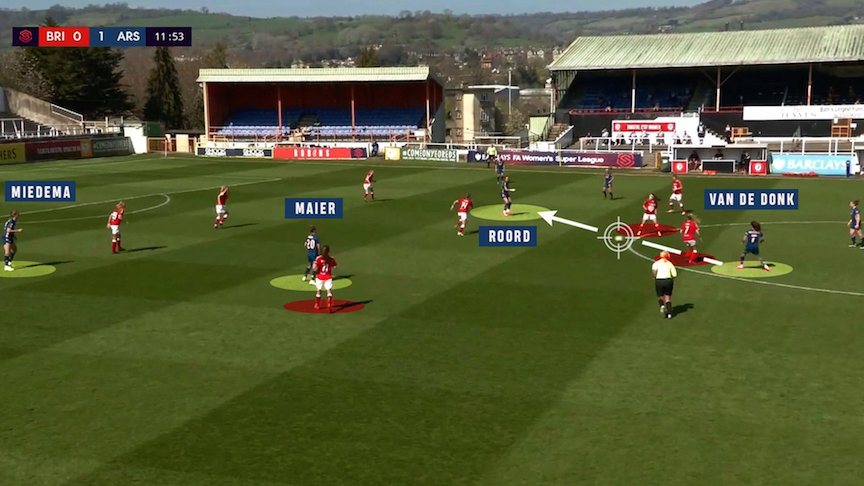 Look again at Montemurro’s post-match quote, “It just opens up one side for us to build and what that does is it cuts two midfielders out with one pass.” Now look at Bristol’s Carla Humphrey and Molly Pike, both of whom have been taken out of the game by van de Donk’s pass while Wellings is occupied by Leonie Maier. 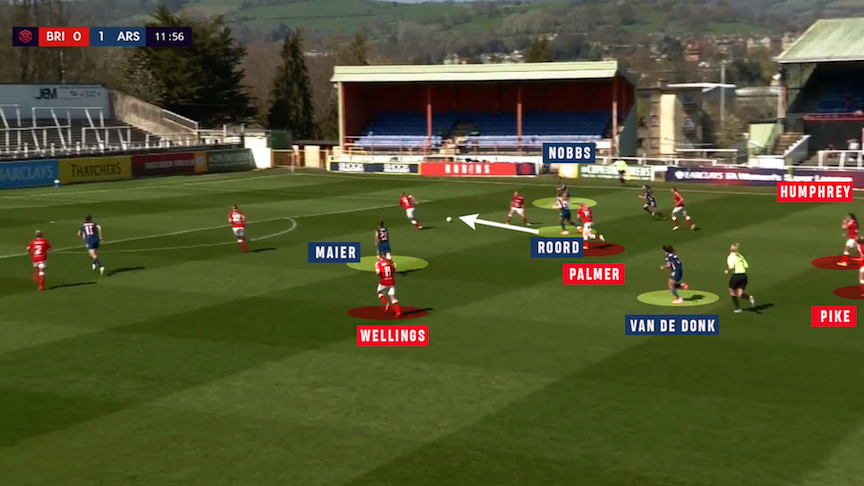 Aimee Palmer is also taken out of the game by the quality of the pass and now Roord has the easy decision to move the ball to Jordan Nobbs on the right. Nobbs’ cross is turned away by Baggaley for a corner, again, look at the position Leonie Maier has taken up as another midfielder running into the area. It’s an example of what Joe was talking about though, they started a move on the left and in two passes, Nobbs had the ball on the by-line on the opposite side of the pitch. 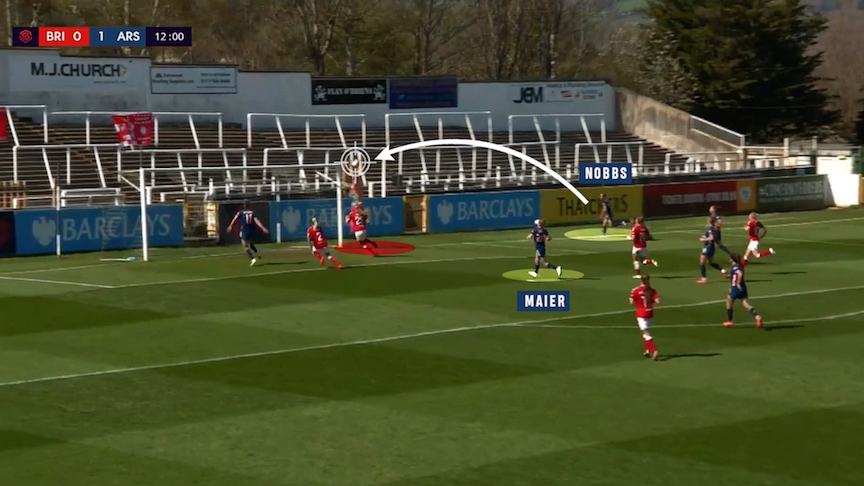 As the move builds for van de Donk’s goal, we see the move starts on the left and that means that Roord is deeper, as part of the build up, with van de Donk pushed right forwards in the central striker position with Miedema off to the left. 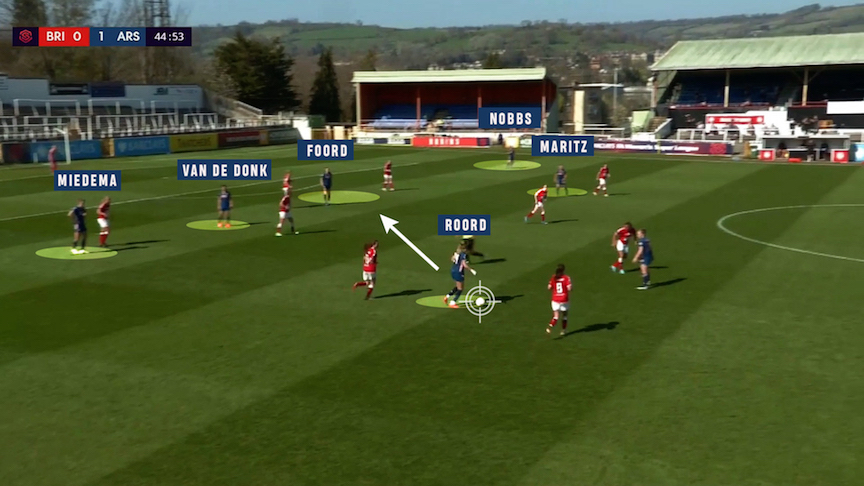 Roord moves to the right and thanks to a brilliant dummy from Caitlin Foord, her pass again takes out two Bristol players to find Maritz. van de Donk is already making a centre-forward run here with Nobbs in space on the right. 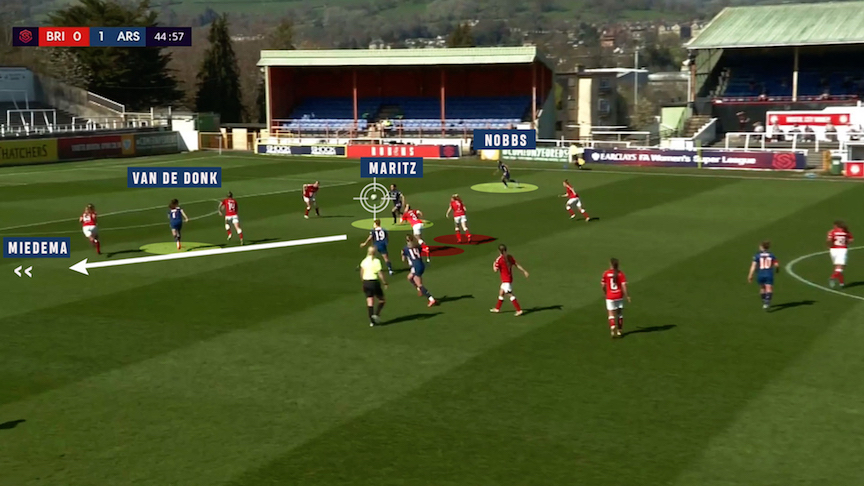 In the image above, you can see that the entire Bristol midfield has been taken out of the equation and Maritz can either go right to Nobbs or else left to Miedema, where she does pass. 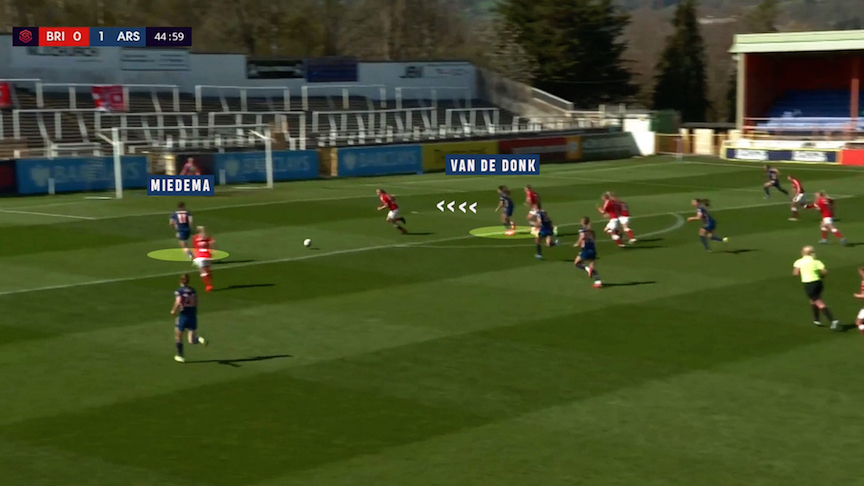 From there, Miedema has an easy pass to van de Donk, who has an easy finish. In recent weeks, Arsenal have rotated van de Donk and Roord in advanced positions far more often. 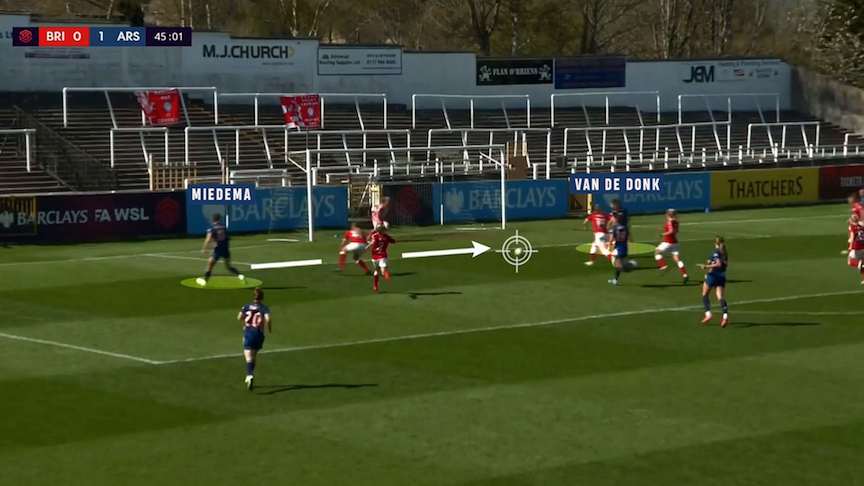 The Gunners double their lead through @DanielleDonk 💥@ArsenalWFC #BarclaysFAWSL pic.twitter.com/ECbYIUvQKv

Arsenal made a double switch at half-time and in the forward line, they replaced Caitlin Foord with Beth Mead, who played on the left with Jordan Nobbs continuing on the right.

In the second half, we see this rotation of Roord and van de Donk again. As Leah Williamson carries the ball forwards, it is Roord who has come short with van de Donk again in the centre-forward position, where we saw her for her goal, with Miedema in the left channel, a position from which she has already scored and created a goal. Leah’s pass is blocked but we see the intention. 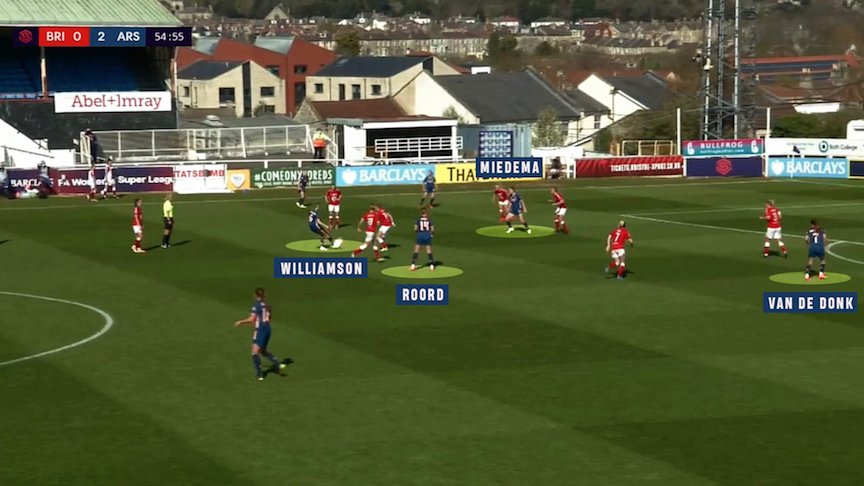 Almost exactly sixty seconds later, it is van de Donk who drops deep to collect the pass from Williamson and Roord who makes the forward run into the centre-forward space. 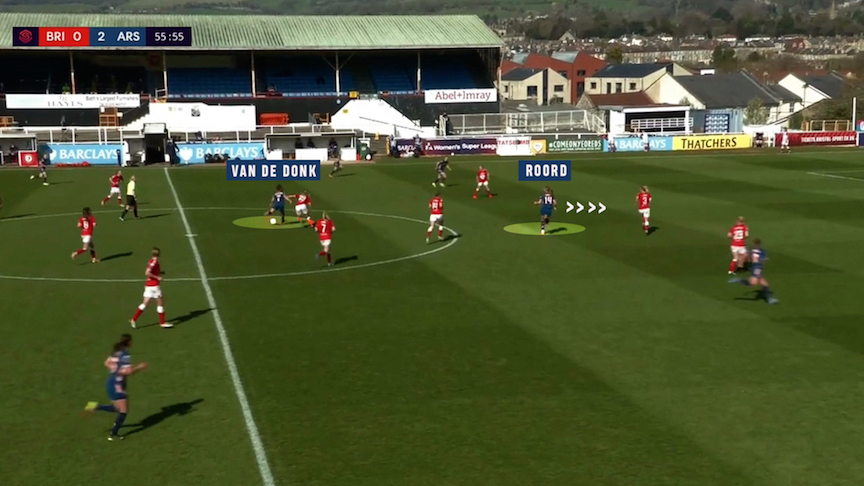 The next time Arsenal build from the back with Williamson, we see the rotation again. This time it’s Roord coming deep again and van de Donk running into the centre-forward area just off the right in case the switch is on. 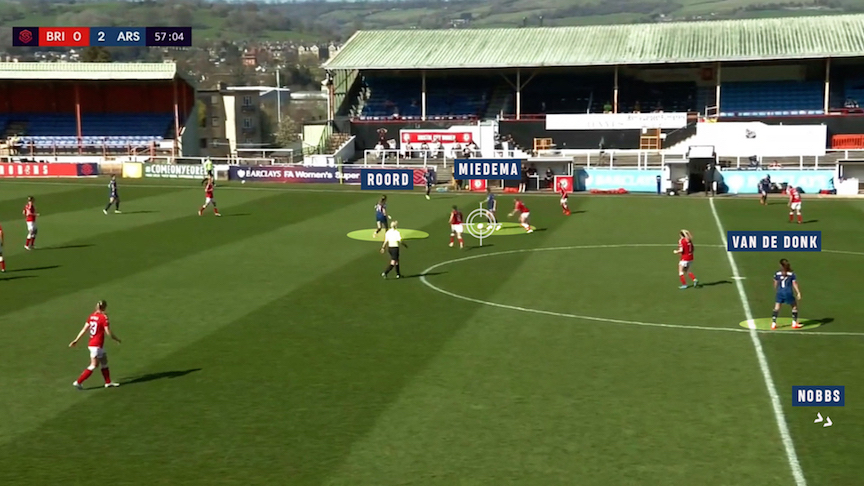 In this example, Miedema spins and switches the play to Nobbs on the right, but the pass is just over hit. If the pass has slightly less on it and Nobbs can collect, you can already see that the low cross to van de Donk is on, just as it was for her goal. 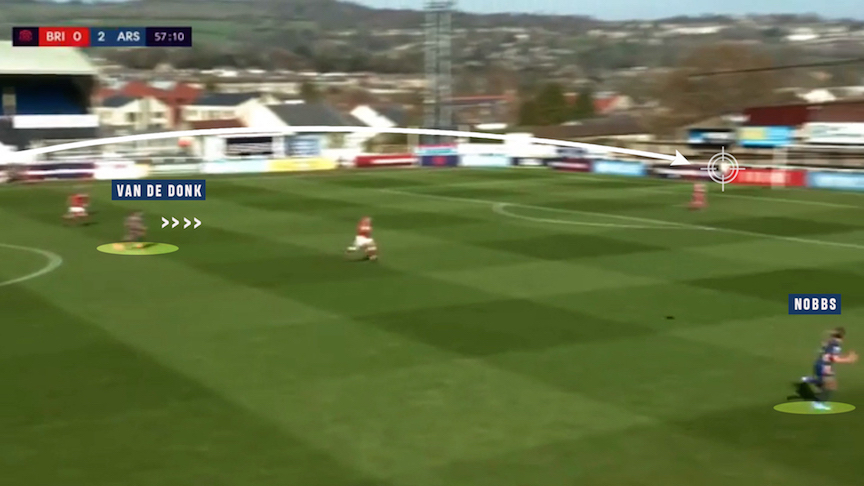 Danielle van de Donk is substituted for Malin Gut on 60 minutes, with Kim Little moved into van de Donk’s position and Arsenal score twice in three minutes through Mead and Miedema to seal the points. At this stage the game really breaks down, as Bristol are totally broken by the third goal and put up little resistance to the Gunners’ attacks.

Prior to this spell of games, Arsenal’s attacking midfield shape was far less fluid, with Roord constantly fielded in the number 10 position with van de Donk always playing deeper. This made Arsenal far more predictable and allowed opponents to mark Roord out of games. Now they rotate Roord and van de Donk far more effectively to keep opponents guessing.

Will Stilberto take over from the Aussie?