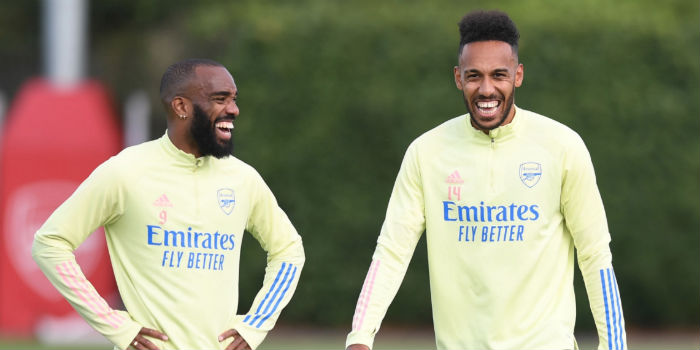 The news comes as a welcome surprise given the supposed seriousness of a few of the problems. Luiz and Tierney have been recovering from knee procedures in recent weeks while Lacazette and Aubameyang have been dealing with a hamstring problem and malaria respectively.

Martin Odegaard made his return from an ankle problem at the weekend with a cameo off the bench against Everton.

Of all the players, it sounds like Tierney is the least likely to travel to Spain this afternoon. Speaking about the Scot’s progress, Arteta said:

“He didn’t need the surgery that we were afraid of at the beginning and then he’s been working like a beast every single day. I don’t know if he’s going to make it tomorrow but he certainly wants to be as close as possible to that football pitch to give himself the best possible chance.”

On having other big players available, he added: “We do need them because we know that we have some players that are in contention and they are the ones who can make the difference in a big tie like this.”

Asked if he was taking a risk with the health of the players, he made clear: “The word risk, I don’t like to put players on the pitch if they can’t perform and they can’t feel secure that they can perform. If it’s a risk or we’re going to take a gamble, then I don’t think it’s the right thing to do.”

We’ve faced Villarreal in European competition on four previous occasions, all in the Champions League.

We beat them 1-0 on aggregate to secure a place in the final in 2006 and three years later we secured a 4-1 aggregate win to make the semis. On both occasions, the away legs were drawn.

hopefully it’s three in a row

Should be, but with this team who knows.

I think leave Tierney out regardless Thursday, then give him 55mins on Sunday, readying him to fully unleash hell on Villareal next Thursday at the Emirates.

I got excited and then read ‘Luiz’….. In any case, lets have a nice straightforward win with a couple of away goals

Luiz has been our best defender post Boxing Day. We need him for the second leg and hopefully the final. His playmaking and buildup is critical and he makes Gabriel play with freedom. I for one am excited hes back

We need every man, woman and child ever born in the history of the world to support us in order to win that EL.

Got to admit I’ll be pretty annoyed, but not surprised, if Luiz comes right back into the side. Holding and Mari seem really solid together

Good news about the other 3. I think I’d still go with…

…as our front 4, with Odegaard and Auba impact options from the bench

I would start Auba at CF but if he’s not 100% over it, wouldn’t want to risk a lethargic performance

We suffer creatively without David Luiz.

And by far and away the most experienced player in the squad in terms of late stage European competition. With a CL medal to prove it. I’d play him.

I strongly disagree with that

I’d guess Auba could be far from match fit? But then again, what do I know!

Rest Tierney this week and give him a cameo roll off the bench in the next prem match…. Luiz I don’t feel comfortable with at all so please don’t start him… Aubameyang a cameo substitute in the 1st leg but start Balogun in Spain a full fit player hungry to score goals and impress… Lacazette I don’t know fit he is but only start him ahead of Balogun if proper match fit I’m not completely sure what to do with the midfield but if I had to choose then I would go with Smith Rowe as attacking Mid but myself… Read more »

I think if we will let ourselves to be the our recent selves – we won’t have a chance against them.
I saw their match against Barcelona at the weekend and even if they lost – I think Emery managed to orchestrate them very well.
Not to mention that they are full of very experienced, really professional players (plus the lightning quick and tricky Chukwueze)

The Nigerian we couldn’t sign as a teenager 🙁 Wouldn’t mind seeing him playing for us someday soon, he’s electric.
Anyway, let’s put in a performance tomorrow and take a step towards the final

I remember when Kolo caught Malaria, the was months before he got back to full fitness.

It would be wonderful on a personal and an Arsenal level if he comes back sooner.

Am still fatigued 3 weeks after being diagnosed and treating acute malaria. It’s not a fun illness.

We must take risks and gamble for the game [email protected] What is this idiot on about? This game is the only hope for this team to achieve anything this season after letting us down so many times. And no fking Leno in goal.

Somebody hung over today?

No, but I am digusted at the club, Arteta, and the players this season. I have a problem with us not taking a risk tomorrow. Shocked you seem so jolly this season. Maybe you support Burnley or Palace if you have such low standards.

I would love any player to score the all important away goal. Fingers crossed!

Tierney makes such a big difference to our team

I think Arteta and the club made a big mistake in either not signing another quality understudy for Tierney in January, or not moving Saka to left back

Even if Tierney makes the home leg next week, it’ll dramatically improve our chances of progress into the final

If we can get our strongest 11 on the pitch, we can give anyone a game