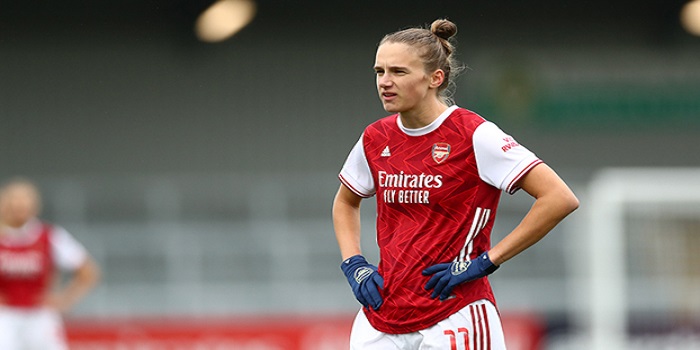 Arsenal striker Vivianne Miedema has been nominated for the Barclays FAWSL Player of the Season award. The Dutch striker currently trails Sam Kerr by one goal in the goal scoring charts, with a “game in hand” against West Ham on Wednesday. She has won the Golden Boot in each of the last two seasons.

Miedema has 17 goals (from an XG of 15.9) in her 19 WSL appearances this season as well as five assists. Miedema is nominated alongside Chloe Kelly and Sam Mewis of Manchester City, Sam Kerr and Fran Kirby of Chelsea and Everton’s Izzy Christiansen.

The nominees are 𝗜𝗡 for the @BarclaysFooty 2020-21 Player of the Season award! 🚨

Who gets your vote?

You can vote for the winner here, voting closes at midday on Friday.

Nobody other than Miedema can win this, surely?

It will probably be Kirby and I think that’s fair. McCabe is very unlucky to miss out on a nomination here, I think she has had a better season than Viv.

Who are the numpties that nominate these players for awards? Anyone can look down the top scorers list and nominate them but what about Berger or Roebuck who have done just as much for their teams throughout the season? Is it coincidence that the top two in the league have let in the fewest goals?

Some good news! Good on her.

Has anyone got Jean-Luc Vasseur’s phone number? 🙂 We appear to have a suitable vacancy at the moment!

When we have won WSL 15 times in a row we can turn our noses up at Monsieur Vasseur’s credentials.
We need a new manager and he is now available so what’s not to like about asking him the question at least?

We have done ok with French managers in the past!