THE LOWDOWN
Arsenal take on Aston Villa in the final match of the WSL season. The Gunners have all but confirmed Champions League qualification for next season, they are three points ahead of Manchester United in fourth place and have a goal difference that is 26 goals superior to Casey Stoney’s side. To surrender third place, Arsenal have to lose to Villa and United have to beat Everton and there has to be a 27-goal swing towards United in the process.

Arsenal are on a run of nine consecutive victories and will want to finish the season- and Joe Montemurro’s reign- on a high. For Aston Villa, the game has a lot more riding on it. They are two points above Bristol City in the relegation place at the bottom of the league. Bristol City travel to Brighton, who they beat 3-0 earlier in the season, while Villa have the tougher task of a trip to Arsenal.

Villa’s vastly superior goal difference to Bristol City means that a point virtually guarantees them safety and they will fight for that point with everything they have. The Villains have been draw specialists in April, tying games against West Ham (x2), Bristol City and Birmingham in their last four games.

Arsenal have an FA Cup tie at home to against Crystal Palace next weekend but this will be Joe Montemurro’s last WSL game as Arsenal manager. There are some players who will take their WSL curtain calls for this game too (most of those stories are already in the press) and they will want to go out on a high, as well as continue Arsenal’s unbeaten run.

A WORD FROM THE COACH
“They (Aston Villa) are in a different position to us, we have the pressure off but we still want to achieve certain goals for the season, we want to get up to the 50 point mark. We want to finish the season in the way that we’ve been going over the last few weeks. We do expect they will probably be conservative because they need a point. They will look to deny us space in our attacking third but we’ve come up against that plenty of times before and we just need to make sure we do what we need to do to get through.”

TEAM NEWS
Jen Beattie (hamstring), Lisa Evans (achilles) and Viki Schnaderbeck (knee) are unavailable and Joe Montemurro tells me that Beattie and Schnaderbeck certainly won’t play again this season while Lisa Evans has an outside chance of playing against Crystal Palace next weekend but is unlikely to be risked.

“It’s not likely (that we will see any of them before the end of the season,” Joe told Arseblog News on Friday. “Jen and Viki certainly not. Lisa is starting to get back onto the pitch but it’s probably not worth pushing her at this point considering where we are in the season and they can all start to plan for the seasons ahead.” Fran Stenson (thumb) is also out. Vivianne Miedema needs a hat-trick (at least) to secure the Golden Boot. She has 18 goals to Sam Kerr’s 20.

LAST TIME OUT
Arsenal were 4-0 victors over Marcus Bignot’s side in February thanks to goals from Vivianne Miedema, Jordan Nobbs, Katie McCabe and Lisa Evans at Walsall’s Banks’ Stadium.

THE OPPOSITION
For Villa, survival was always the name of the game for this season- their first in the WSL. They made a manager alteration in mid-season with 28-year old coach Gemma Davis demoted to assistant manager and the experienced Marcus Bignot brought into the hotseat until the end of the season. Bignot has plenty of experience with city rivals Birmingham City Women.

Bignot has changed Villa’s style to something more agricultural, the number of long passes they play has crept up as they have sought to play survival football. It has cost them some of their attacking potency and conceding stoppage time equalisers to Bristol City and Birmingham in April have kept them mired in the relegation struggle.

What happens when you get promoted, struggle, install an interim manager *alongside* your 'progressive' 20-something year-old head coach, and drop your possession-based identity?

PLAYER TO WATCH
Katie McCabe signed a new contract this week which is fantastic news for Arsenal. McCabe has 11 WSL assists this season (12 in all competitions) with Chloe Kelly injured, an assist on the final day of the season will see her top that particular metric in the WSL. 12 assists and four goals from left-back illustrate the extent of McCabe’s impact.

Quite simply, she has been Arsenal’s player of the season and has responded to the challenge set down by the arrival of a world class left-back in Steph Catley. It remains to be seen how the new manager envisages McCabe, who is also comfortable on the right and left-wing. One thing is for sure, wherever she plays, Arsenal are a better team with Katie in it. 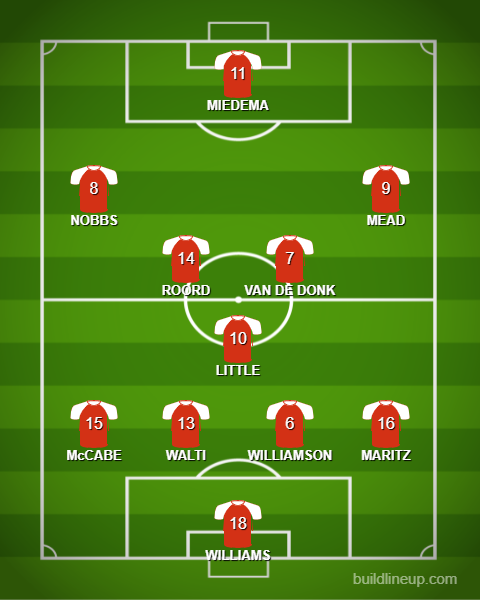 HOW TO CATCH THE GAME
The match kicks off at 2.30pm on Sunday at Meadow Park and will be played behind closed doors. The game will be streamed live on the FA Player app, which is free to download and not geoblocked (except for Australia where Optus will probably pick the game up).

COMING UP
We will have match reaction from Joe Montemurro on the site on Sunday afternoon as well as the usual analysis piece on Monday evening. There will be a new episode of the Arsenal Women Arsecast on Tuesday AND we will have something exclusive and a little special on the site on Friday, so stay tuned….

I hope that Mead and Nobbs both play “stormers” which may give them a good chance of making it to the Olympics 🙂
I’ll be sad if it is indeed Jill Roord’s final game though.

I’d love a Viv hat trick and again get the golden boot. But I think Villa will park it and it’ll be tough to get big numbers. Also, I don’t think Viv minds. As long as they win, she’s happy.

I’m more excited for Katie to get the assists. She deserves it.

Real Arsenal FC will play on friday afternoon. Here I’m really excited of what is coming in the future. Though I’m not sure, if we could make the same mistakes again.

I really want to see Katie play as LW, Foord as RW and Viv as CF, while Jordan, Kim and Lia are in the middle. or maybe that’s Joe’s future plans if he still manages Arsenal, considering he brought Steph Catley.

I would love to see that. I don’t think it would be that big of an ask for Katie to transition into a “traditional winger” role again, seeing as she does that in most WSL games anyway. I can’t help but feel we’re a little weaker on the right wing. Foord has been very good at her role but I think we need someone truly world class on the right, then that would be a scary front 3 and midfield indeed. I also think increased competition would raise the level of everyone else.

Have you not been following the news? Joe has 2 games left and then he is gone. I don’t think Caitlin is a winger she is better as a centre forward and we have Lisa who is a natural winger on that side. Katie should revert to left wing once Steph is fit. I don’t think Viv is a traditional centre forward. She works best when she roams. She can maximise her chances on goal because the defenders lose her and are not sure who is meant to pick her up. If she is more static in a rigid formation… Read more »

She’s been very good and productive as a mostly traditional CF for both club and country–but this year it’s been more of a struggle. Letting her roam is good, yes, but I’m not sure playing her as a 10 as she’s been effectively doing lately, for periods of time, is ideal. She’s a talented passer and smart–but she can’t score when away from goal.

Again 10 is too rigid. I suggested letting her roam so as not to pigeon-hole her. She needs the flexibility to deceive defences.

Agree: For me Arsenal are a better, more dangerous attacking team with McCabe playing LW rather than left-back. She whips in good crosses. And maybe we’d have seen more of that this season had Catley not missed the entire year. I expect so. That would leave multiple candidates for RW–Foord, who’s played well this year, Mead, who is good but hasn’t been terribly productive; Evans, who was very good at RW the year we won the title but has been a bit lost amid all the player shuffling and position-switching this year.

I have a feeling that Beth Mead will bounce back to top form next season, and then some………….

I’m hoping to see Caitlin in the starting XI on Sunday – her link-up with Miedema is good and I’ve got the feeling it will only get better.