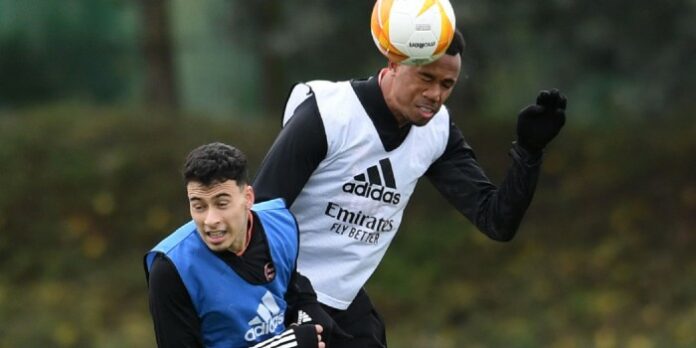 Gabriel Magalhaes and Gabriel Martinelli have both been selected by Brazil to represent their under-23s at the Tokyo Olympics this summer.

The tournament, postponed from last summer due to Covid-19, is due to start on 22 July and will run until 7 August.

If Brazil make their way to the final it means the pair will miss most of Arsenal’s pre-season preparations before the 2021/22 campaign gets going on 14 August.

Obviously, it’s fantastic news for them on a personal level but it’s a bit of a pain for Mikel Arteta who is already facing a complicated summer with several players likely to feature at the European Championships.

We should state, there’s still an outside chance of the Olympics being cancelled with the Japanese public increasingly uncomfortable about hosting the Games during the pandemic.

Later in the season, we’re also set to lose Thomas Partey, Pierre-Emerick Aubameyang and Nicolas Pepe to the African Cup of Nations. That tournament is slated to start on 9 January.

No chance they’d take luiz and edu instead?

Football has the World Cup, the euros, it has no place at the Olympics in my opinion.

Is it an approved tournament? Do we have to let them play?

Willian can go and represent Team Frosties in the Inter Toto Kellogg’s Challenge Cup for all I care…..

“Obviously, it’s fantastic news for them on a personal level”. Well I hope they pay for themselves on a personal level while they miss the start of the season for which my season ticket goes to pay for their wages. All to play in a bullshit tournament.
who gives a flying one about football in the Olympics?

I get your frustrations too but in Brazil they have a different footballing mindset to Europeans. The Olympic football tournament is a massive deal over there. Fans take it seriously. For the players, it’s seen as a stepping stone to the senior squad.
They also give massive importance to the Club World Cup (which is usually just an annoyance to the UEFA Champions League winners) and they also prioritise their domestic cup as just as important – if not more important – than their league.

The world does not revolve around you.

You’re right. While we are constantly told how it’s all about “the fans”, in reality it’s about the kind of “fan” who doesn’t actually to games. Well done you.

Lots of fans are too far away to go to games, it doesn’t make them less of a fan. Fans like you are what makes the Emirates so toxic sometimes, always moaning, never supporting. “ClockEndRider OUT!”

the Emirates so toxic sometimes? Is this something you read online or have you witnessed this toxic atmosphere, and if so in what way?

Yes I’ve personally experienced this toxic atmosphere many times. There are far too many miserable season ticket holders who call themselves “fans” who do nothing but moan all the time. It would be nice if some of them got themselves out of Highbury and into the 21st century. Those were fantastic times but this is where we’re at now, and moaning all the time isn’t going to make anything better. And don’t be condescending, just because I support all our fanbase doesn’t mean I believe things I read online.

”Get themselves out of Highbury.”

Mate, rest assured that this football club is now metaphorically as far away from Highbury as it will ever be possible to be – in spite of the fact that geographically it’s only down the road.

The Emirates is not toxic. Arsenal fans have always been a very fair minded crowd. We only dish out grief to those who deserve it.

The only exception to this was the Wenger Out Brigade, who were largely outnumbered by those of us respected Arsene.

Other than that, it’s always been fine. Highbury was the same.

Remember how much stick Ramsey was given when he was 24/25 – you all wanted him out of the club. Well he left eventually – and we’re in such a better place now.

The recently acquired global armchair experts are forever putting down the Emirates faithful these days. Because they don’t experience the many facets of attending on match day, they seem determined to rubbish the views of those who do.

You pay their wages? No more silent Stan. 😂😂

All these competitions were known by the club before they signed them. It means, it is part of their contracts.

How arrogant and ignorant can one be?

I live in Brazil, and i can say, nobody gives a shit about that tournament here.
Nobody follows the Seleção, all players are selected by their agents.
Thats why everybody here hates that shit.

Well said mate. No doubt you’ll be thumbed down by the ‘Internationals First, Arsenal Last’ brigade, but I salute you for being refreshingly honest about the matter. You’re only voicing what the majority of the Emirates faithful secretly feel anyway. It’s the clubs (not that Kroenke will give a shit about it one way or the other in out case) and the supporters (and their pockets) who suffer as a result of these Mickey Mouse tournaments. It’s the same with the ACN. The number of players we’ve lost for important fixtures over the past 20 years or so has been… Read more »

kind of a egoist view…

As a Gooner, my loyalties are towards the interests of Arsenal Football Club.

The Olympics are fine, but if the Olympics have a detrimental effect on this club’s performances in the league and cups through the omission of key players, then the Olympics can jolly well fuck off.

God only knows we’re handicapped enough with an owner who doesn’t give a shit and a manager who hasn’t got a clue what he’s doing. The last thing we need is the fucking Olympics giving our opponents a further leg up.

Why didn’t you support the Super League if you only think about the club?

Erm…..the same reasons as everyone else? The Super League would have handicapped those clubs not in the Super League. Simple as that.

The Olympics, by the same token, will also handicap those clubs who have to release players.

Why the fuck football has to be a part of the Olympics is beyond me.

“my loyalties are towards the interests of Arsenal Football Club.”

Don’t claim you’re voicing the ‘secret feelings’ of other people to bolster your own argument. Also what sort of witch hunt is this ‘internationals first, Arsenal last’ bs? We’re all Arsenal fans here mate, it’s just some of us have the capacity to understand that for some people countries are more important than clubs.

Olympics should be played by u21 players only, no exceptions. To say fans only have credibility if they are at emirates regularly is however utter rubbish, I think Wenger has one or two things to say about that.

The ACN is different I’d say. It’s something to consider when buying African players but the Olympics is ridiculous. For so many sports people, this is the pinnacle of their careers and competing against the best in their field. Its the elite going against each other. Football at the Olympics simply isn’t anything like that and these players (mostly youngsters) are getting paid by their clubs. They are professional people who get paid to play for their clubs. During a time when they all should be recovering so they’re ready to go again they’ll essentially be holidaying it up in… Read more »

You make some good points. 👍🍺

Most people care about the Olympics and it’s a huge deal for these young players. I’m delighted for them, it’s good experience and hopefully they’re successful. Good players are always expected to play for their country, it’s something that top teams have to get used to, and being spiteful and refusing permission to let them go would be the best way to drive them out of the door. Your season ticket is a drop in the ocean and probably goes towards paying for the bog rolls at the Emirates, so you’ve no reason to be such an entitled twat.

No need for abuse mate. It’s just an opinion.

It’s also an excellent reflection of the club for the next top young Brazilian players, who would be encouraged by seeing our Gabis competing at the top level. What message would it give out not letting them go?

That this club is serious about the competitions that it takes part in ITSELF.

Well, my season ticket is on the 12 month hold option until season 2022/23 but if things don’t improve drastically I’ll probably trade it in and, your post being an accurate indicator of the balance sheet, Stan and Josh will have skid marks. 😊

Actually mate, most football fans don’t give a shit about the Olympics – if it means losing their (sometimes best) players.

Even Mbappe wants to go if it wasn’t for the succession with the Euros. It is a good competition for that age group.
I think the life in the olympic village and being with the cream of the crop of all other sports is enticing to them.

I should imagine M’bappe having a Costa with the current world champion of the egg and spoon race will mean fuck all to most Arsenal fans….

Martinelli doesn’t even get enough games with us this season, so this tournament can provide an opportunity to boost his experience and confidence. He may come back crocked by injury or become a better player with international experience.

You can add Elneny to that African Cup of Nations trio.

And that’s on top of the uncertainty of midfielders Ceballos, Willock, AMN, Guendouzi and Torriera. Even Xhaka rumoured to be in the shop window.

No, he’s another central defender, 7 feet 3 inches, weighs six stone and is slow, accident prone and a specialist in conceding comedic whoppers. Which means, given our recent history, he’ll fit into our set up perfectly.

Non-related topic;
Fcuk Europa conference league, just play the u-23!
Low financial return; another Thursday/Sunday fixtures for a meaningless uefa ego-driven competition; travels to some obscure backwater towns around Europe. Not worth it, not for me.

The acronym for F**K Europa Conference League is FECL – close enough to FECAL – which is about right….

It’s more of a pride thing – not wanting to break that 25 year European qualification continuance. It’s probably the last bit of pride we have left at the club right now.

That and the longest unbroken run in the top division.

But isn’t it a good opportunity to play youngsters and fringe players to up their value/develop them? Provided we actually do that

No. Sorry but even U23, U21, U19 etc participation in the Olympics is absurd. So is the inclusion of professionals and top drawer athletes in many sports. If the Olympics is not the highest goal in your sport then go seek your championship elsewhere If the NBA championship, or the Stanley Cup, or the UEFA Cup or league title is more important to you than the Olympic title then you and your sport really do not belong at the games. Let those who aspire to the Olympic championship as the ultimate goal in their athletic career compete for the medals… Read more »

Sounds like another convoluted season coming up in 21/22, but we’re all in it so just gotta get on with it. Losing the guys to the ACN is a pain but good luck to them, maybe we’ll lose Bissouma as well?

France have also qualified for the Olympics by means of being one of the four semi-finalists at the 2019 UEFA European Under-21 Championship so that will presumably see Guendouzi playing there, with maybe an outside chance for Saliba.

That being said Japan yesterday added three more regions to their state of emergency so I reckon a good chance it will be postponed again.