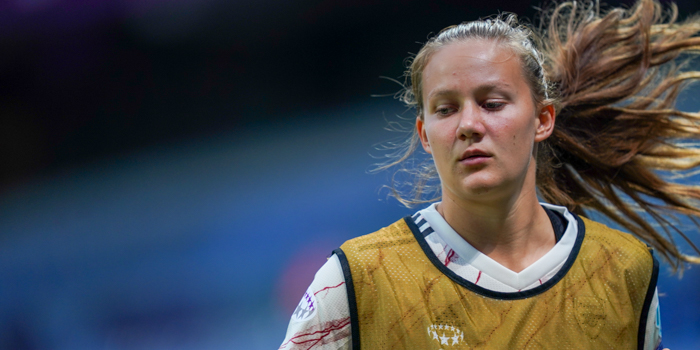 A statement on the Arsenal website read, “We are disappointed to confirm that Malin Gut has suffered a rupture to her anterior cruciate ligament in her knee.

“The injury occurred during a training session in the week and Malin has since been receiving specialist care. The operation will take place in the coming weeks, after which she will begin her rehabilitation programme immediately.”

Gut was heavily linked with a return to Grasshopper Zurich this summer due to homesickness but it’s currently unclear whether this injury would have impact on that situation.

All the best in your recovery, Malin.

Oh this one hurts. If all the talk is true and she’s already struggling to find her way abroad and wants to go home, this is a huge mental blow. I would assume staying is best for her recovery. Arsenal would provide her the best care and chance to come back stronger. But as I’ve seen Jordans short docu and heard DC talk about it, it is extremely difficult. Even for someone in a good place mentally. And I’m not sure Malin could do it, in a place she’s already having a hard time. So she would want to go… Read more »

A terribly cruel blow for Malin. She will need a lot of support and I’m guessing she house-shares with team mates but we already know she’s homesick. Somehow I feel it will be better for her recovery to be surrounded by family and friends in Switzerland. Wishing her a speedy recovery.

Just what she didn’t need and yet another serious training injury! Let’s hope the new manager can see what is going wrong at the training ground.
I’m guessing they will probably get the surgery done and then send her home for rehab. They have physios in Switzerland. Not sure if that will run her contract down also so we may have seen the last of Malin as a Gunner. She showed promise but if she was not happy here it was best for everyone that she returned to her native country.

Not sure this one can be put down to training methods, women are six times more likely to rupture their ACL than men and this is the first serious knee injury in training under Joe- all of the others have been in games. That said, he did admit to ‘mistakes’ in medical care of players in his interview with Tom Garry. Arsenal are currently recruiting a head of medical and sports science so fingers crossed the injury situation does get better!

Just seen this in an article on the BBC website about Casey Stoney:
“Stoney showed frustration in press conferences over the facilities after a number of United’s key players picked up training ground injuries, including USA star Tobin Heath, summer signing Alessia Russo and winger Leah Galton.”

Such a cruel blow to a young person seemingly struggling with other issues.
Best wishes Malin.