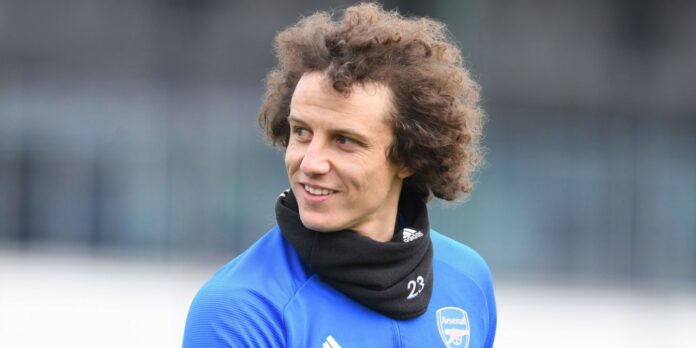 When David Luiz limped off during Sunday’s game with Newcastle United, it looked like his season might be over.

Making his comeback after seven games on the sidelines with a knee injury, he lasted 52 minutes before ping his hamstring making a pass. Having worked so hard to make a swift return, he looked disconsolate and was consoled by a number of his teammates as he trudged to the dugout.

While the seriousness of the problem is yet to be confirmed, the boss sounded relatively upbeat when he faced the media ahead of Thursday’s must-win Europa League semi-final second leg with Villarreal.

“No [there is no update],” said Arteta. “He was feeling better yesterday. Let’s see how he is today. We don’t know the extent of the injury yet.

Asked if the centre-back could be available tomorrow, he added: “With David it’s always possible because he wants to be available.

“He’s made an incredible effort to be in the position that he’s in today and the fact that he played against Newcastle was already a big bonus. He had surgery on his knee so with David, you never know.”

Given his declaration this time last week that Kieran Tierney and Alex Lacazette were both fit – neither were included in the squad for the Villarreal or Newcastle matches – we suspect this could be more mind games from Arteta who will want to be doing everything he can to throw Unai Emery off the scent.

That said, hopefully, the injury isn’t too bad and Luiz will be in with a chance of featuring again before the season is over.

Arteta: We have a clear plan for the summer

Arteta thanks David Luiz as Brazilian heads for Arsenal exit

Unless his injury substitution was cunning theatrics on Sunday, it’s highly doubtful we’ll be seeing Luiz on Thursday.

I can’t see where Arteta was suggesting he would be back for Thursday. It was just saying he may play again this season.

It’s the bit where the journalist asks him if he’ll be back for Thursday and he says “With David it’s always possible because he wants to be available”.

Mikel isn’t satisfied with playing Russian Roulette with Luiz’s inevitable next game costing mistake, now he’s desperate to roll the dice with him playing not 100% fit. Anyone that says Arteta is risk adverse doesn’t know what they’re talking about.

You certainly did not deduce your position from the article. Because there is nothing there that suggests Arteta wants to play a-not-fully-fit Luiz.
He was only giving answers to questions.

We do have previous though. Koscienlny now has two titanium knees, Vermaelen shuffles around his retirement home on a Zimmer frame and Per Mertesacker is now 5’4″.

Emery: “gud ebening Mikel, you can fool me once, but twice shame on thee”

I like the way you threw a “good ebening” in there. Fresh and out of the box approach to your bantz.

The Beast
Reply to  beNZed

I thought the spelling of ‘gud’ was particularly avant-garde.

A radical twist on a lighthearted xenophobic classic.

Collibosher
Reply to  The Beast

I’m glad I’m not the only one who finds this “good ebening” lark offensive. In Spanish, both b and v are pronounced the same. They sound like a B at the start of a word, and like half-way between B and V inside a word. When I spend a few weeks on holiday in Colombia 10 years ago with friends I’d met on line, I had to get used to being called “Dabey” instead of Dave. But at least Emery spoke more English than those who mocked it, could speak Spanish. It wasn’t great, but even allowing for the language… Read more »

It sounds like mind games for tomorrow to me. Not sure anyone would believe it.

I think Luiz may have played his last match for us. Gabriel, Holding, Saliba, Mari and Chambers are enough next season.

Agreed re the CB situation. They may not be a dream group of CBs right now, but they’re good enough for what we’re trying to achieve. And we have so many more pressing priorities Gabriel, Saliba and Chambers all have potential to improve into genuine latter stage CL quality players imo, even if they’re not there yet (maybe I’m overrating Chambers slightly, but I see a very good CB in him). And Mari and Holding are solid rotation options. Just need time for this group to develop settled partnerships – I’d like to see Gabriel/Chambers given a shot soon, think… Read more »

I’m not sure I’d like to take that chance. We might have to make a sub in minute 12 if he’s not fit enough. If we need to chase the game in the later stages, that’s a sub we could really miss.

We have 5 subs and don’t have 5 quality players on the bench. I’ll take luiz for 12mins if that’s the case

Given that we probably won’t need to run back that much (as Emery will most likely sit everyone in yellow around the penalty area like a handball team), I could see the use.

Please tell us, in no fewer than 2500 words, what it says about our defense

Obviously Arteta needs as many players as possible to select from for Villareal and if that includes Luiz then all the better, if not then OK. We have to get the result, whoever is available.

These are some lame mind games…

Boy I miss the days of Fergie, Wenger, Benetiz, and even young Mourinho.

Mourinho was so good at mind games that he managed to convince himself that he was the best manager in the world.

He even convinced himself he could make Spurs decent! Hahaha

Artets is very aware of the opposition.
Reminds me of one Unai Emeretus……..

Would be a boost if he can play. I reckon this is the kind of game that would suit him – a big game where Emery will be defensive- minded and we’ll get possession. And we have 5 subs, in case he can’t last the whole match.