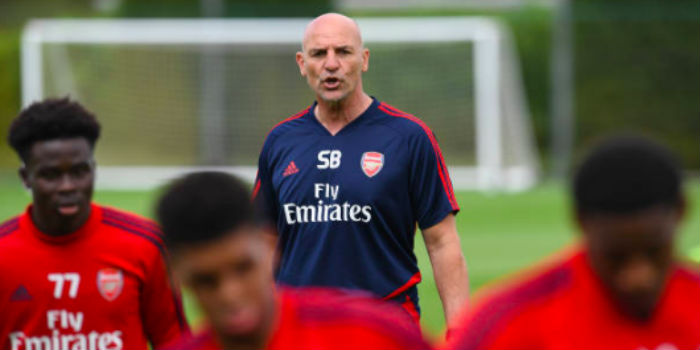 It emerged last night that Arsenal have sacked Steve Bould after two years in charge of the club’s U23 side.

With Arsenal U23s having come close to being relegated this season – they only secured safety in their final game of the season – it perhaps isn’t a major surprise that Bould has been dismissed, although it is worth considering the circumstances that he had to deal with.

Last summer Arsenal took the unprecedented step of loaning out the vast majority of their experienced U23 players, with the likes of Daniel Ballard, Tyreece John-Jules, Harry Clarke, Zech Medley and many others heading out on temporary transfer.

That left Bould with a very small group of players to work with initially, and the club then made a host of signings from elsewhere. Swedish striker Nikolaj Moller settled in well and enjoyed a productive season overall, but some of the other acquisitions were rather baffling at the time and still are now.

Centre-back Jonathan Dinzeyi, for instance, was released by Tottenham before being picked up by Arsenal. Despite being one of the older players in the U23 side he often struggled and by the end of the season he was being outperformed by U18 players such as Zane Monlouis and Alex Kirk.

Midfielder Tim Akinola, who was previously at Huddersfield, played the most amount of games for the U23s this season but his performances were often erratic and he appeared to be a level below his team-mates in terms of his technical attributes.

Winger George Lewis was perhaps the most unusual signing of all having arrived from the Norwegian third tier. Lewis found the net in the EFL Trophy but failed to score in ten appearances for the U23s, while he was also outperformed by a younger player in his position in Kido Taylor-Hart.

When all of the above factors are taken into consideration (as well as the likes of Emile Smith Rowe and Bukayo Saka being in the first-team) it is clear that Bould’s job this season wasn’t a particularly easy one.

That said, he made errors on some occasions, with his tactical selections not getting the best out of some players, while Arsenal remained vulnerable defensively.

At times Arsenal lacked the dynamism that they had when Freddie Ljungberg was in charge, and it was perhaps the right time for a change.

Bould deserves a lot of praise for the work that he did in charge of the U18s previously, winning the FA Youth Cup in 2009 and two league titles. The step up to the U23s, however, hasn’t quite gone so smoothly.

Arsenal are now on the lookout for their fourth U23 coach in just over three years.

Shame. I rate Bould as an icon at this club. He is Arsenal through and through. It’s a shame because, despite the struggles at U-23 level, Hale End overall has been one of the only bright spots in terms of club management for many years. It’s given us Saka and ESR, of course, but also, Willock. AMN, Nketiah, Nelson, and soon-hopefully-Azeez, Taylor Hart, Ballard, Hutchinson, and Patino. Hard to imagine that Bould hasn’t been a significant part of those players’ development.

Balogoun no? Too good for the first team and not good enough playing for U23?

Yes, sorry, Balogun too of course. And there’s a 17 year old right back, Norton-Cuffy, that looks promising as well. Adherence to the so called self-sustaining model is inherently reliant on the frequent production of quality sellable assets from academy level—‘internally generated revenue’. Hale End is producing valuable assets for this club at a time when we desperately need them. Thank you Steve for your contribution to that.

They gutted the majority of the academy structure, decided over Bouldss head on a “brave new scouting structure” (scrounging through the discard piles of top academies), left the man with shitty resources to work with and have the gall to sack him for underperforming. This club is so fucked.

Steve Bould isn’t a snake so he didn’t fit in. Some bad things happened to Arsenal in the management dept. Have a feeling that MA is just a puppet and will do and cover anything to hide shady shit. I can bet my life savings that Stan never apologized for his intentions with ESL. MA just had to say he did.

We should do everything we can to today to avoid a 7th-place finish. Hopefully, Spuds will get it and ruin next season with too much early football.

Shame about Stevie Bould: he was an Arsenal icon.

This season has been a pile of steaming horse manure: thank God it’s over today.

New manager for the start of next season please.

I don’t get the logic in wanting Spurs to have a crack at European silverware instead of Arsenal.

There’s two good outcomes from that. If spurs lose, “lads, it’s tottenham”. If spurs win, the first trophy they’ve won in a long long time will arguably be the least prestigious trophy.

Wishful thinking mate, with a new manager next season.

I think we should have retained Freddie in the club. He is passionate and connects well with the youngsters.

While we are talking about bringing back some of the invincibles as part of the Ek package, Freddie was already here, with a wonderful record as well. Saka, ESR are only a couple of examples of what he produced. I’m sure people like Jeorge Bird with better insights on that will be able to a much better view of his contribution.

“Defensively vulnerable”. Wasn’t we the same way when Wenger was in charge and he was the number 2? I think the guy has been nicking a living for ages.

Two First Division titles, one Premier League Title, two FA Cups, a European Cup Winners Cup, two U-18 titles as manager, an FA Youth Cup, 3 more FA Cups as an Assistant, and key member of one of the best defenses in Arsenal’s history

Come on man, he’s one of our own. The man’s a king for this club. Pump the breaks a bit…

Arsenal is touting the new analytics approach to finding talent. The players mentioned would have been a first test of the system. Failure has to be explained and that would have been put at Bould’s door step.
His departure was maybe inevitable but also leaves the new regime open to judgement in the new season.

This “so called” sacking (nothings been confirmed yet) just isn’t the Arsenal way. Just seen on the Athletic that Josh Kronke flew over for the match today and visited the team at the training ground yesterday to talk to the players and staff. Wouldn’t be at all surprised if this was behind the “sacking” Can just imagine Bouldy going off on one to Mini Kronke about what he thought of him after having his squad ravished this year. Loads going out on loan plus the likes of Saka, smith Rowe and Willock promoted out of his team. Can see him… Read more »

The U23 season hasn’t gone too well and there have been difficult circumstances. Nevertheless, this does seem a pretty shoddy way to treat someone who’s been a great servant of the club. How an organisation treats its employees is a good indication of the values that drive it. I wish I could be prouder if Arsenal.

Any fan of the Arsenal slagging off, abusing or cursing at Stevie should be ashamed of themselves. The man gave 30 illustrious years to the club proudly. A change is always bound to happen in life, and we need a little more class.