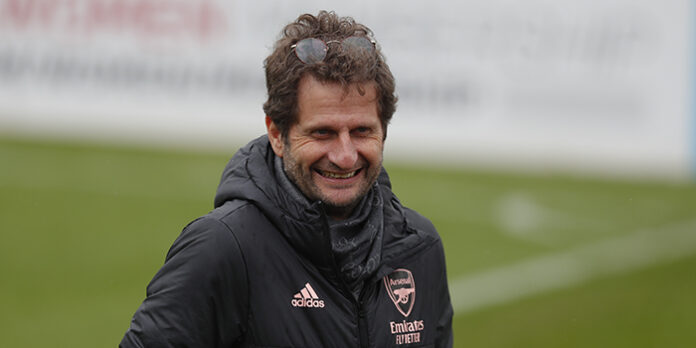 Former Arsenal boss Joe Montemurro has been confirmed as the coach of Juventus Women. Montemurro stood down from his position at Arsenal at the end of last season, telling Arseblog News “I know in my gut that my cycle is done and the team needs someone else to take them to the next step.”

The Australian coach’s grandparents are Italian and Joe is fluent in the language. Previous coach Rita Guarino left at the end of last season with rumours connecting her to the Inter Milan and Fiorentina jobs. Joe will officially take charge of Juve on 1st July.

Arsenal, meanwhile, have not yet announced Montemurro’s successor. An application and interview exercise took place after Joe announced he would be standing down at the end of March but the exercise has been very closely guarded, without so much as a rumour as to the identity of the new successor.

Not all seasons have been concluded across Europe, with Spain’s Primera Iberdrola not due to finish until 26th June for instance. The Frauen Bundesliga only finished on Sunday which might explain the delay in announcement if the new coach is from one of those leagues.

So much for taking some time off…

He certainly wasn’t pushed out by the club, they wanted him to stay. In fairness, I think a lot of the “time out” stuff was a bit misinterpreted, he didn’t say he was going to take a year out or anything. He told the Australian press he was planning to spend the summer in Italy and then reassess.

Thanks for the clarification, Tim!

Appreciated, Tim – it definitely feels a little odd, considering the tone of what I read and heard when he announced he was leaving!

Not least from the video of the entire team wishing him well. A lot of mentions of time off or taking time to be with the family which leaves this as something of a surprise. It is what it is but something was definitely lost in translation.

Definitely. Why would he voluntarily leave a very good situation and a quite competitive FA WSL–even with the flak he received this past year–and go to a club and situation that is demonstrably less good? When Arsenal last played Juventus, which I think was year before last, the Gunners won 5-0 and it could have been worse. I’m sure Juve has improved somewhat since then, but still….Whatever the case, Italy is a nice place to be, and I wish him well.

Well, congratulations to Joe on his new job. I guess he was made an offer that he couldn’t refuse (no pun intended).

You need to watch the Godfather which is based on an Italian family in order to get the quotation…I agree that is not a good example of a pun.

I wouldn’t want to suggest to a Mafia boss that he was Italian! Surely they are Sicilian? A bit like calling someone from Wales English!
Juve, however, are from Turin which is definitely in Italy!

Sicilans are italian. So the comparison would be calling someone who is Welsh, British… which they are

So called pun could still have been done without though. Linking everything italy to the mafia is a lazy stereotype abd pretty poor form.

I didn’t stereotype all Italians to the Mafia it was The Godfather reference that did that! My point was that Sicilians are only Italian to everyone outside Sicily. Most people I have met from Sicily consider themselves Sicilian not Italian harking back to the days not that long ago when Sicily was a separate Kingdom. There is another analogy, of course, with the Catalans and the Spanish!

I know pal… thats why i referenced the ‘pun’ specifically. Agreed that the Catalan Spain analogy would be more fitting

It was a common saying used by the character “Vito Corleone”, the head of the Corleone Crime family in the Godfather Part 1 and Part 2. It was meant to imply that Vito was willing to use of coercive/threatening means to get a seemingly impossible task completed. The fictional Corleone Crime family in the movie is used to represent American criminal syndicates that had cloned the organisational structures of the Sicilian Mafia in Italy. As Juventus are an Italian team, Magneto was making a tongue-in-cheek comment on Joe Montemurro’s new appointment. Naturally, you can imagine that people of Italian descent… Read more »

As someone of Italian descent, I couldn’t give a shit. Stop finding things to be offended by, on behalf of other people. It was a joke.

Great 👍. Just tell me exactly where I said that I was offended by the joke.

I thought overplayed meant something repeated often, like a song played on the radio too much.

They must have changed the dictionary definition since I last checked😒.

Can he take Arteta with him?

Landed on his feet there, hmmm

That was always going to happen. Take a summer holiday in Italy just as the position at Juve becomes vacant. Mmmm! I just wish our clowns would get on with the replacement process.
Notice that two more former Gunners look like they are WSL bound, i.e to Manchester, in Vicky Losada and Asisat Oshoala while we continue to twiddle our thumbs.

Take a summer holiday in Italy to rent a house may be closer to the truth.
The Japanese lady that we bought, her goal that was shown on this site, if scored at the men’s Euro, could be the goal of the tournament.

Huh… Who would have thought. Turns when Joe was talking about being closer to family, he meant his ancestral family tree.

This is funny all-round

Well I definitely didn’t, that’s for sure. Good looking out 👍

Here hoping he continues reacting to countless victories over there in Turin, expect when Juventus face Arsenal at some point in the future

Are Juventus Women referred to as “the old ladies…” by any chance?