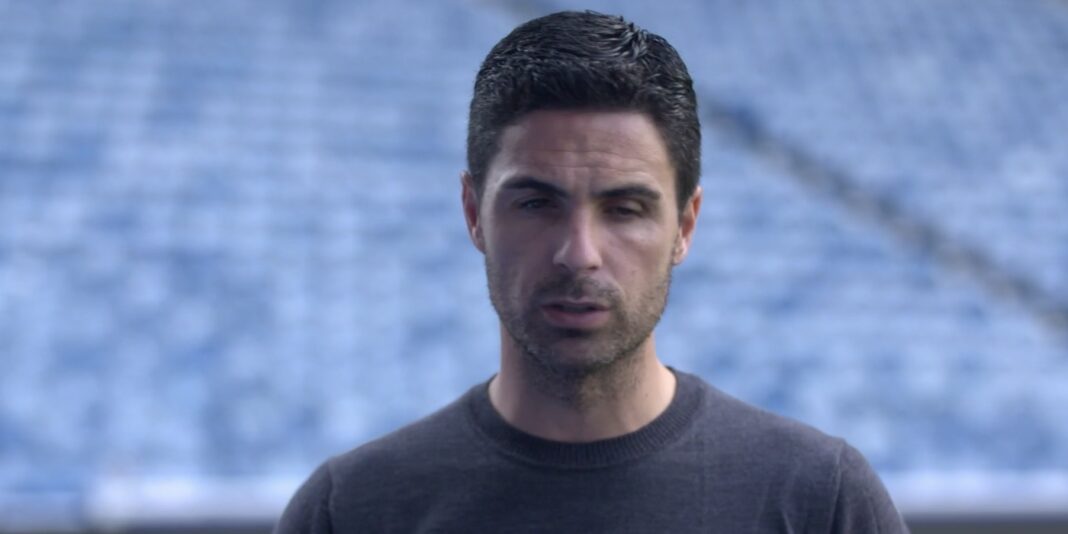 Mikel Arteta was relatively pleased with his return to Ibrox after Arsenal’s 2-2 pre-season draw with Rangers.

The Gunners boss spent two seasons with the Scottish side in the early part of his career, and today saw his side come from behind twice thanks to goals from new signing Nuno Tavares and substitute Eddie Nketiah.

Conceding from two set-pieces was a bit of a worry, but given new set-piece coach Nicolas Jover has barely had time to work with the players, we can hope things will improve in that regard.

Arteta also hinted strongly that further new signings would be on the way as he reflected on the training camp in the Scotland and the games against Hibs and Rangers.

“We trained really hard, played two games, and now we’re going to be travelling to America next week,” he said.

“We didn’t have any injuries which is really positive in the first week. We’re going to have some new faces arriving probably, so very positive.”

On the game against Rangers, in which his side spurned plenty of chances to score goals, he continued, “Overall I’m really pleased with the performance. I think we dominated the game, we created so many chances – I counted about eight or 10 clear chances to score – but this game is decided in both boxes.

“We weren’t clinical in the opponent’s box and we conceded two goals from two corners, which were the only chances they had apart from the counter-attack from our own corner.

“It’s much better from the other day and you tell that physically we were already better in the second game, the organisation was better, individually they played better, but I really liked the collective understanding of the game and how we executed a lot of things we’ve been working on in the training pitch.

“We created so many chances but we are not converting enough. Today we should’ve scored many more goals and with the quality of the players we have up front, they have to demand much more of themselves.

“But at least we are getting there, the process is becoming much clearer, much better.”

Arsenal travel to America next week to face Inter Milan and either Everton or Millonarios in the Florida Cup, taking place in Orlando.

As long as it’s not new faeces arriving. We are well stocked already

Ben White and Lokonga of course.
More Will Come, but later.

We needed a new goal scorer to supplement Auba. Laca was supposed to be a very good one but he isn’t a reliable player. Martinelli is second in this role but Arteta isn’t developping him well.

Shirley Lokonga will certainly be an unexpected new face.

Lokonga 78 games, three goals even for a central midfielder not too productive.

Leno’s actual human face is arriving soon to replace his stand-in sex android face he’s had since taking a whack in the chops against Kaiserslautern.

Rob Holding’s 21/22 face got sent up to Scotland without hair so they are getting a replacement there.

And Cedric is finally getting his own face after we decided that, as an original face was extra, we’d use an early prototype of Cesc’s instead.

Will the Cesc face have the mullet that came with his early prototype?

Also, and I know I keep saying this about facials, but it’s INCREDIBLE to me the NSFW illustrations that Wikipedia will allow on their pages.

Well, you told us all that Arsenal will be signing Grealish.

New faces hmm .The Kroenkes and Gazidis have fooled me before so not holding my breath.
It better not be old players returning with fillers and nose jobs.

A M
Reply to  Lettra

Tammy Abraham has been linked.

Will take Tammy Abraham ahead of Nketiah.

Signing Tammy Abraham is just asking to be disappointed. Not because he isn’t a good player but because of our tactical set-up. Nketiah has look average because our style of play is not tailored to strikers in general and that will also show with Tammy. Don’t be fooled by his stature, Tammy is not a target man. He’s more in between Auba and Nketiah in play style. That is to say average hold up play, great speed, okay passing, excellent movement, okay dribbling, average heading, reliant on chance creation etc Essentially all of Tammy’s goals are within 12 yards of… Read more »

I’ve heard us linked to Koopmeiners as a potential target for the Partey Partner, who based purely on stats feels like he might be a good fit but I just want to know were doing something to address that need.

Honestly Koopmeiners seems like a Xhaka clone in terms of playing style. Plays on the left of central midfield thunder cannon of a left-foot, good range of passing and dead-ball ability. The problem is he’s just as slow/immobile and seems like more of a DM than a CM.

I’d really like us to have athletes in central midfield again. Not someone who the opposition can bypass with a simple straight-line sprint.

Fair point. I’d heard Koopmeiners was faster than Xhaka and scored something around 15 goals last season, but your information may well be better than mine. I’d love someone who runs back and forth all day long in midfield too, but if Xhaka was a good fit for Partey then perhaps Xhaka+ is all we need?

Nah I doubt my info is better, it’s mostly just my opinion of him from glimpses in Europa League matches. Besides Xhaka, he also reminds me of Milivojevic at Crystal Palace. I think he’s a good player, just lacking in some key areas the midfield also needs.

If anything Daan below is far better served to tell you all you need to know about him.

The lad Koopmeiners will be in for a rude awakening, the pace of the Premier League compared to the Dutch League is like night and day, he would have to learn very fast that he won’t get time on the ball, plus the up and down the pitch running would be very challenging.

I watched Teun Koopmeiners a quite some times last season as I follow the Dutch Eredivisie closely. Koopmeiners is not the level of players we should be considering at this point.

Although he has good qualities, I even doubt he will reach Xhaka’s level, let alone be a significant upgrade. The fact that he scored so many goals for a midfielder is because he takes the penalties for AZ.

First choice Locatelli, but he ain’t coming…..if not then Neves will be fine. Although I’d still love Bissouma

My first choice would me Renato Sanches.

Good on the ball and has power in his game.

He had a good tournament but was second choice all season at Lille to the new Leicester signing…..same thing happened before Bayern bought him. Why aren’t we matching Aouar’s asking price???

Renato seems good but I’m really disappointed Locatteli doesn’t want a move to arsenal. Well, If we can’t get a Xhaka replacement then we shouldn’t be losing Xhaka IMHO..

If the news Di Marzio published is true that he is preferring to stay at Sassuolo rather than coming to us, than I do not even think we should get them.

I feel it is important that all the players we get this summer are happy and willing to play for us, otherwise it would not work out anyway.

We could always offer him 300K/wk in true arsenal style.

Maybe willian has a mutant in his belly like in total recall.

Well he said “probably” so who knows 😁

Warning: This interview contains the word process, which may cause stress, frustration and anxiety in the reader.

This is top top comment and should be on top

Painting the Forth Bridge was/is a process….

Was the above told in a press conference, or in a conversation with agent Kia?

The new face will be a bald Willian

How about a new set piece coach?? Two easy corners….

How about new ownership and a new manager.

I’m reminded of the story of Kevin Keegan walking into the Newcastle United dressing room and saying “Boys we have some new faces coming in” and Peter Beardsley replying “Wor new faces boss? Can I have one?”. Anyways hoping it works out for Ol’ Legohead.

Upvoted for the joke, but seriously hope we get a Beardsley mark ii.
I’d love it!

Ehmm did we stop pursing Aouar bcz of Odegaard?!! I thought Aouar was cheaper this season. Honestly tho if not Aouar I prefer Julian Brandt. He’s so versatile -can play both wings and Numb 10. Not to mention he’s affordable. If Pepe has a bad run we could have Brandt play his wing with ESR through the middle and Saka on the left. I think we can mek things easy for ourselves by being more realistic with our targets you know.. One other area I feel we should really just look at too is the striker.. I don’t know what’s… Read more »

Brandt would be a fantastic acquisition, don’t let his underwhelming spell at Dortmund put you off there is a very gifted footballer there who would be suited to the physical challenges of the Premier League. He was fantastic at Leverkusen and in the German International youth teams. He is also very affordable. Your right he could play a number of roles too.

May as well do a swap for Lacazette. Might suit all parties.

There must be a reason Rogers didn’t go for him again tho.. I hope he’s not a lazy player