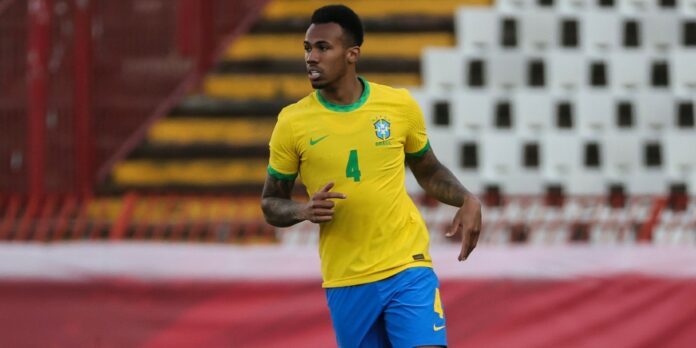 Gabriel Magalhaes says the injury that has ruled him out of the upcoming Olympics is ‘nothing serious’.

The Brazilian had been given the nod to represent Brazil’s under-23s in Japan but pulled out this morning two weeks before the tournament begins. We’re not sure on the specifics but it’s believed he’s nursing a problem in his right knee that could be tendinitis.

We tried to find out more but unfortunately, phone calls to the omnipotent being he references in his Instagram post have not been returned.

Gabriel wrote: “Unfortunately I won’t be able to fulfill my dream. Not now. Due to an injury, nothing serious, I will not be able to defend my country’s colors at the Olympics.

“I will be, from a distance, rooting for the national team and for my teammates. God knows everything.”

Gabi is expected to continue his rehabilitation back in London in the coming weeks and will hopefully be fit for the first game of the season against Brentford on 13 August.

In case you missed it, Arsenal’s male players have been Tokyo-yoing in and out of the Games.

Like his namesake, Gabriel Martinelli was also called up by Brazil. Then the striker was dropped. And then he was called up again. Meanwhile, William Saliba was named in France’s squad. But he, and several others, have since pulled out.

It’s all quite fitting for an Olympics which, already delayed a year by Covid-19, has flirted regularly flirted with the idea of being called off.

I like how he casually shifts from clarifying that he supports his national football team to ruminating on the omniscience of a higher being.

Good news as long as it’s not a long term injury. The football calendar is now designed to run footballers into the ground. Not that impressed that Arsene is now proposing a World Cup every two years. As it is we will have 2 Euros, 1 WC and 2 Olympics within 3 years plus Copa Americas and African tournaments. It’s too much.

Yeah I’m surprised by Arsene on that one, normally I find myself agreeing with him.

Arsene won’t disagree with his employer in public.

Well he did suggest to get rid of all the other international breaks that nobody cares about the slightest, and that forces the players to travel long distances on very short periods of time. Not sure about the biannual WCs, but I would be glad to see the end of these for sure.

Don’t think it shows that , only the way team qualify for the tournament. I think fans would be happy with more games.

they love a bit of God those Brazilians. bit of christ.

Didn’t he have knee tendonitis for a brief period last year?

Down with the Olympics!

Not the easiest injury to get rid of. Poor fella.

We’re at the finished lap ladies and gentlemen. Arseblog with the reverse-jinx😁. 55 years undone by Gareth Southgate.

My neighbour won’t stop beeping his car. I might not get some sleep tonight.

He and Ben White are a promising partnership. (But then so are him and Saliba…)

Think I’d rather have Bissouma, if we’re going to raid Brighton and spend a fortune.

Yes, I agree with you. Not quite sure why replacing Luis is priority over replacing Xhaka. We have better options in the defense than in midfield.

Bissouma is my no. 1 target this summer but that doesn’t seem to be the case for Edu/Arteta.

Brighton will sell them both if prices are right.

I know this might be wishful thinking…but maybe Arsenal wanted to do the tougher deal first (Ben-homegrown, english, young, full international)….I’m sure after Ben getting Bissouma over the line should be quicker…

There is of course the matter of another £50m.

Agreed.
Ben White’s made zero mistakes in the Euros so far. Sign him!!!

Rehab at home, and get some rest!

Also noticed the new cookies prompt on the site, just like to say thanks for disabling all by default! Pure class 🙂

Being omniscient, the supreme deity cannot get away with “new phone who dis?” when you call.

Glad it’s nothing serious. A blessing in disguise if not for him, for us.