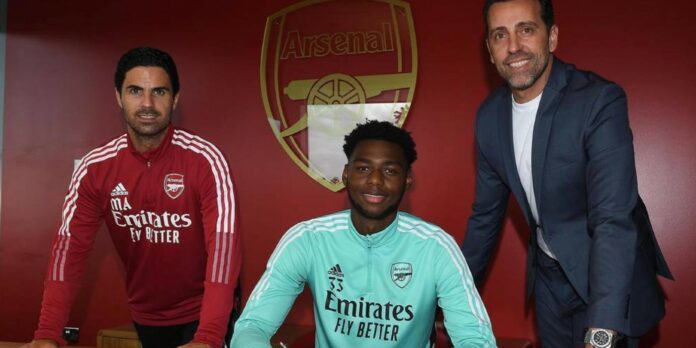 Arsenal have confirmed that 19-year-old goalkeeper Arthur Okonkwo has signed a new contract and will be part of the first team squad next season.

The 6’6″ stopper was a regular at under-23 level last season and is highly regarded inside the club.

On the decision to tie down Okonkwo, manager Mikel Arteta said: “We welcome Arthur to the first-team squad. We are so happy another academy player has come through our system at the club. Together with Arthur’s huge talent and hard work, we thank our colleagues at the academy for developing Arthur in recent years to get to this stage, they are doing great work with the players’ development here and should be really proud.

“Arthur was working and travelling a lot with the first team last season and we have all seen his quality at first hand. He is a strong young goalkeeper with great potential and we’re so pleased he has signed a new deal. He has absolutely earned his place in the first-team squad.

“Arthur will now join us every single day in training, where we look forward to watching him continue to develop and improve his goalkeeping. I know all our fans will join me in congratulating Arthur on this positive step in his career.”

Technical director Edu, also confirmed that Okonkwo will be the club’s third-choice keeper.

“It’s great that we have our third goalkeeper who has progressed from our academy and we look forward to seeing more young players coming through,” he said. “Arthur has worked hard to get this far and we’re confident he’ll have an exciting future.”

Given Bernd Leno will miss the start of pre-season having been on international duty with Germany and Alex Runarsson is expected to leave the club, possibly for Turkey, the Gunners are desperately short of personnel to actually play in goal during pre-season.

While the search for backup to Leno continues, Okonkwo will presumably get minutes in the upcoming matches with Hibernian and Rangers. Good luck to him.

Good news. I thought I recently read somewhere that we risked losing him. Maybe our future GK solution is in-house. Good luck to him.

Yeah his contract expired last month. I am really happy that the club managed to tie him down to a new contract. A very talented and confident goalkeeper with a lot of potential.

He also has a good record against penalties at youth level. Hopefully that side of his game continues at senior level.

Best news of the summer so far. This kid could be a top class goalie!! I’d be more than pleased if our 2nd string/cup goalie was a straight competition between Hein and Okonkwo.

Excellent news. Best of luck Arthur, when the chance comes be ready.

I don’t think they coach that any more

We presume mentioning him means we are signing a second choice keeper. Hope King Arthur will take the reins soon.

My thoughts. So we currently have a no.1 and no.3
So Leno or no one. If no one unavailable we have Okonkwo

I’d rather we sign a first choice keeper and make Leno #2. A solid shot stopper, but a #1 needs to be a better passer.

Great news for him and hopefully for the club in the long term.

What I really want to hear is new signings to improve the team now, and departures where the other club is actually paying for the player

I’ve a good feeling about this guy. It’s a big show of faith to give our 3rd choice position to a 19y/o.

So true, and he has grown! 6’6 is a big lad. Best of luck to him, been reading about him for years and as someone else said if he is going to the back up then I’m ok with that.

Yeah, he has grown a lot in the last year. I think he was around 185 give or take (memory is a little hazy) last summer.

This is really good news. Always have to be cautious about hyping youngsters who have never played a first team game, but he’s a special talent with huge potential. Rare though that the club has ever publicly committed to a keeper being 3rd choice in this way – you have to wonder what the likes of Iliev and Hein think of that statement and I can only assume it was a commitment the club had to make to keep Okonkwo at the club.

That was most likely the case. Arthur was technically a free agent for the first week of July.

I’m really impressed by both Hein and Okonkwo. For Hein, earning senior caps as an Academy player is quite an achievement. Though at club level, I think Okonkwo just about edges him. Okonkwo has a better clean-sheet and penalties saved record at both U18 and U23 level.

As Karl is quite younger than Arthur, he can afford to have an additional year in the U23s to sharpen his game.

Iliev has no chance presumably, Hein is interesting though.

Apparently, Hein has refused to sign a contract extension. He’s out of contract in July 2022.
Let’s hope that Arthur can be our long-term solution between the sticks. He has all the attributes to become our no:1 if he works hard at improving and manages stays healthy. The lad is a top prospect.
Just need to sign up Emile Smith-Rowe, Kido Taylor-Hart and Miquel Azeez then Edu can keep his job for a little longer!!! 😉

This is really good news, he’s an excellent young goalie and I’m excited to see him progressing. So much talent coming through our academy.

A Voice in the Noise
Reply to  Vonnie

Agreed! Our academy is, by far, our current pride and biggest source of joy the last few years.
ESR, Saka and Balogun are the obvious gems, but Willock, AMN and to a lesser extent Nketiah (primarily for club, he’s been great for country) and Nelson have all made that difficult step from academy to first team.
Huge credit to Per’s work! Long may it continue

Daveo
Reply to  A Voice in the Noise

*And Chambers and Holding as experienced leaders too.

Well over £100,000,000 worth of talent there promoted from our youth system in the last few years. Extremely impressive.

Arsenal have a future England ‘keeper?

Funny thing is I moved him to the 1st team in football manager 2 hours earlier, then I come on arseblog to see this headline. Now KSE let’s get the Grealish deal done just like you agreed for me

@arseblog, he was not handed the contract, he earned it with hard work, dedication, application and effort. I will be waiting for how you will report when ESR signed his contract. COYG

Congratulations to him. Such awesome, awesome talent. Hoping him and Balogun choose to play for Nigeria at senior level 🙂
Going the Iwobi route instead of the Saka route.