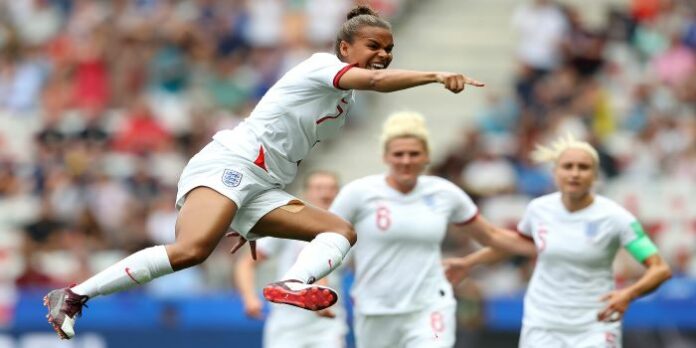 Arsenal Women completed the signing of Nikita Parris from Lyon this week. Parris is an England international and part of the Team GB squad for this summer’s Tokyo Olympics. Prior to that, the Toxteth-born forward spent four years with Manchester City and four years with Everton. But what kind of player are Arsenal getting and how might she fit in?

What type of player is she?
Parris is a very attacking wide forward who is most comfortable on the right hand side. She can also play as a central striker in a front three, which is where she spent most of her time with Lyon. Right-forward is her best position however, where she is a very front footed player that likes to get between centre-halves and full-backs in the half spaces.

Parris has very good acceleration and is able to take beat full-backs near the touchline, however, she is at her most dangerous combining with forwards on the inside channel and either getting to the by-line, or shooting across the goalkeeper. Parris is a prolific goal scorer whose output in front of goal remains very high, even if she didn’t have the happiest time at Lyon.

Why didn’t it work for her at Lyon?
In France, Parris was largely brought in as a back-up centre-forward. Lyon already have Delphine Cascarino on the right flank and now they have also brought in Brazilian born US international Catarina Macario who can play there too. Much like Arsenal, it is difficult for Lyon to purchase a back-up striker due to the quality of their first choice Ada Hegerberg.

Arsenal settled on Caitlin Foord as a back-up for Vivianne Miedema because she is a wide forward who can play upfront. Lyon arrived at a similar conclusion with Parris (though they have also since brought Jodie Taylor into the fold). In January 2020, Hegerberg ruptured her anterior cruciate ligament.

"You've got to put your head on the line… Literally!"

Look at the toughness of Nikita Parris!

She put Lyon in front and took an absolute clattering for it, but got up and played on 👏#Club2020 pic.twitter.com/A0GMAhrg4Q

This meant that Parris became a regular centre-forward for Lyon and it’s not her optimal position. She was supposed to be a rotation option or interesting option from the bench but that changed with Hegerberg’s injury. Parris is a very different type of forward to Hegerberg and the team was not built to her attributes due to the sheer number of stars in the starting eleven.

Her scoring record was still very strong with Lyon (more on which anon) but Lyon Feminine are a little like Real Madrid in the men’s game. It is a galacticos club both in terms of its culture and its tactical setup. Fellow England internationals Izzy Christiansen and Lucy Bronze also left the club prior to Parris’ second season, who were valuable allies for ‘Keets.’

What does the data say?
Parris’ end-product has been very high for the last four seasons now and she has just turned 27. In the 2017-18 season, she scored 11 goals (none of which were penalties) and made six assists for Manchester City. However, she moved to a different level in 2018-19 when she scored 18 goals (four of which were penalties) and notched seven assists.

She finished just behind Vivianne Miedema for the Golden Boot that season and her 15 open play goals came from an XG of 13.5. This all emanated from 19 WSL starts. It was on the back of that season when Parris earned a move to Europe’s premier club in Lyon. Her place as a starter was nowhere near as secure in France but her numbers remained impressive.

In 2019-20, Parris scored eight goals and managed an assist from 10 league starts (there were an additional five appearances from the bench)- which gave her an XGA (expected goal and / assist) rate of 0.93 per 90. Of course, that data has to be placed into the context of Lyon’s domestic dominance. (All data from FBRef).

Last season, she scored 13 goals from 13 starts in the D1 Feminine and managed one assist. This pushed her goal contribution per 90 to 0.91- including her seven substitute appearances. Her assist rate dropped largely because she was played as a centre-forward. Keets also scored six Champions League goals across her two seasons in France against Ryazan (2), Brondby (2), Bayern Munich and Fortuna Hjorring. She has scored 14 times for England in 50 appearances.

How will she fit in at Arsenal?
Her arrival certainly means that Arsenal are well stocked in the wide forward positions. Parris prefers to play on the right and would likely compete for a spot with Beth Mead, who has monopolised that right-wing role in recent seasons. Mead is more in the mould of a traditional winger, who likes to put crosses into the area and is one of Arsenal’s most prolific players at forcing turnovers high up the field.

There is also Caitlin Foord, who is a more physical player than Arsenal’s other options. The Australian is adept at holding the ball up, combining with her full-back and providing another option in the penalty area. Foord is a wide forward who plays much more like a second striker, similar to Parris in mould but different to her in method.

The @Lionesses re-take the lead through Nikita Parris pic.twitter.com/FyS9j6xJ74

Then there is new signing Mana Iwabuchi, who can play on either flank or as an orthodox number 10. Iwabuchi mainly played on the right at Villa but with Mead and Parris on that flank, she would be more likely to compete with Foord for a role on the left- unless, of course, Mana plays as the most advanced midfielder.

Iwabuchi is much more your typical creator, she likes to dribble in-field, is excellent in tight spaces and likes to play one-twos and short passes. Parris is a different model of wide forward, she is more a second striker in the Theo Walcott mould. She wants to get in behind her full-back for shots or to get to the by-line for cutbacks.

This is all before you consider that Lisa Evans and Katie McCabe can play as wingers too. Like Foord, Parris can also be considered a back-up or rotation option for Vivianne Miedema through the middle. Her presence is also helpful from an administrative standpoint with a minimum number of ‘homegrown’ players required in each WSL squad.

Thanks for that Tim.

How would you compare her to Bethany England ?

For me in theory Viv and Keets are perfect compliment to each other. It is exactly the profile of the player we needed. We will see how this works out during the season, but like the idea a lot. Viv needed someone rapid to the frontline to make maximum use of her creating ability. Besides it should make more room for Viv. Viv-Keets-Mana frontline has balance and a lot of goals in them, at least on paper.

We can only be very pleased with this. Good times ahead.

well, this is exciting and it speaks to the ambition of the club. Welcome Nikita!!!

I hope that her arrival will convince Viv to stay!

I guess no need to see Nobbs on the left 🙂

Wont be surprised if we see Williamson slot into defensive midfield as an option.

I suppose RB is where we are short at the moment, especially with Maier off (not that she was given many chances). So hope for one more signing in that area.