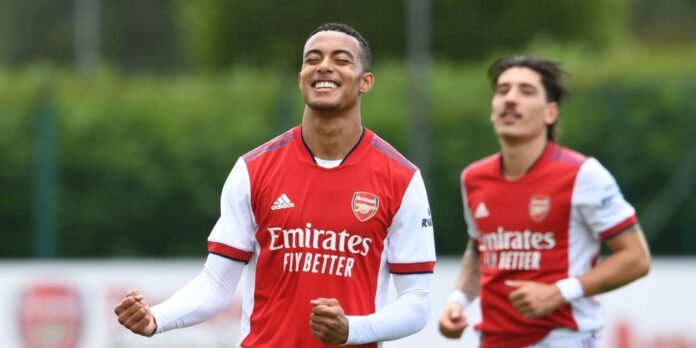 Miguel Azeez has become the 12th Arsenal player to leave on loan this summer after agreeing to a season-long deal with Portsmouth.

The midfielder heads to Fratton Park to gain first team experience having starred for the Gunners at under-23 level.

Azeez made his Arsenal first team debut as a substitute in the Europa League win at Dundalk and was part of the squad that travelled to Scotland for pre-season.

Having helped develop Emile Smith Rowe while coach of Huddersfield, there are high hopes that Pompey boss Danny Cowley can develop Azeez’s talent in the tough and tumble of League One.

Speaking about the deal, he said, “This is a deal that we’ve been working on for the majority of the summer and so we’re delighted.

“Arsenal have been really good and we have to thank them for putting their trust in us with another young player.

“We’d worked with Emile Smith Rowe before and the loan manager Ben Knapper highlighted Miguel when we first arrived at Pompey, saying he was the next one for us to look after.

“So we’ve seen him develop since then and fallen in love with him – as you do when you see a boy who’s as talented as he is.

“You can see the hunger and humility to learn and get better, which we really like. He’s really studious and wants to find ways to improve his performance.

“We think the supporters will like Miguel and he’s very good at dribbling, while he can be a real goal threat for us as well.”

Best of luck to him at Pompey!

So now our midfield during the AFCON is Xhaka alongside Lokonga, with Chambers as backup?

willian and cedric are also available

Willian not any more.

Yes, the answer to our midfield backup is to play a kid with barely any senior club games to his name.

Let’s try holding this thought for a moment – January transfer window. All our answers for tomorrow, don’t need to come today. Just to be clear, ‘tomorrow’ is January.

Well there isn’t another solution is there if AMN leaves?

Partey and Elneny will be gone from the start of January. When was the last time one of our Jan signings didn’t happen in the last couple of days?

Charlie Patino it is, then.

Viv The 🐐
Reply to  EddyF

Then we can oficially play the 5 -0 -5 -0 formation. That will be groundbreaking stuff.

What makes you think he’s ready to play in the premier league. Partey been here a year and hasn’t done much. Bergkamp, pires, Henry all took a bit of time to get going and were experienced international players.

Good luck, lad. Perhaps he could be a good option rotating with Sambi, if he has a decent full season at Pompey.

Azeez Is Good
Reply to  SanBas

A great deal for all parties, let’s hope he stays fit and plays a lot of minutes.

Good! Go get some decent game time (fingers crossed) away from the nagative mess we are creating for this season.
Return positive and ready to take a step up under a new manager.

Good luck to the man!

Get out while you can, Azeezy.

The next one to break through.
Good he went on loan than being part of the circus this season will be.

Good year of experience and come back when Mikel is a goner to replace Xhaka in the squad as the ‘Konga-Partey backup.

Here’s to hoping he absolutely smashes it at Portsmouth and comes back to a better first team set up.

The farther he is from Edu-Arteta-Kia kickback team, the better. Hopefully the 3 will be out of Arsenal when he comes back from loan.

Finally over the line. Maybe even beeing in a promotion fight and maybe getting the Pompeys promoted will be another side effect I will enjoy.
But it is seriously the best thing he can do.
I can see a new swell of young players coming into the team the next few years. Not all of them will make it. But that is much better, than we have seen in the mid 2010s.

I think all young talent should go to the Tony Pulis school of long throwing development.
Anyway, this is a good move…. hope he does well at Pompey

Do yourself a favour mate, and blocker.

I always get the ad for German watches