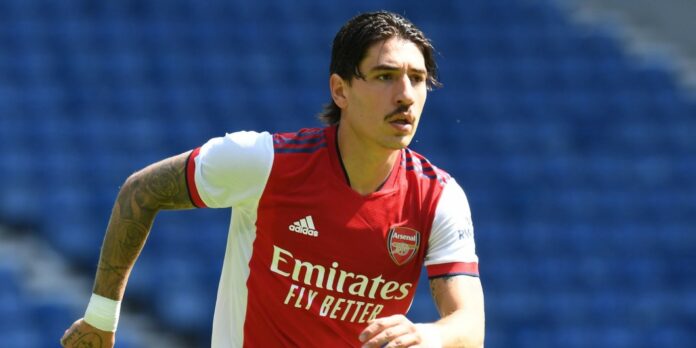 Real Betis have confirmed the signing of Hector Bellerin on loan for the season.

The 26-year-old returns to Spain after a decade at Arsenal having indicated to Mikel Arteta earlier in the summer that he was keen to leave the club.

The first links with Betis – the club Hector’s father supports – surfaced in May but it was believed his wages would make a deal difficult. The right-back subsequently made it clear he’d be willing to take a pay cut to secure a move.

After a flirtation with Inter Milan came to nothing, stories circled that Arsenal were open to the right-back, who is under contract until 2023, signing a new deal. It doesn’t look like that has come to pass meaning he’ll be just 12 months out from becoming a free agent on his return to London.

Nine goals, 29 assists in 239 games for Arsenal is no mean feat for a kid who looked completely out of his depth on his Champions League debut against Borussia Dortmund in 2014.

He proved his early doubters wrong to secure a place in the PFA Team of the Year in 2015/16, picked up a couple of FA Cup medals and was just an all-round good lad, leveraging his status within the game to talk about the environment, veganism and mental health. He was also sent into bat by his Arsenal teammates when pay cuts were proposed by the club and stepped up to discuss racial inequality and Covid-19 charitable efforts with his peers.

While it’s harsh to suggest things have unraveled for him, nine months on the sidelines with a ruptured ACL suffered in January 2019, coupled with the club’s poor form, seem to have hit his confidence.

He’s not playing at the level he was and with that in mind, you can completely understand why he’d want to try something new. We’ll miss his hair, his mo and his mimicking of Kieran ‘tucked-in-shirt’ Tierney.

Have a good one, Hector. We’ll see you in a year.

More wages saved for a season but he is still our player. Can’t we sell anyone.

Kola asking for 3 year contract, £3m a year and £3m signing on fee shows that Hector actually going on loan is good move for all and not greedy.

Go be cool and beautiful in Spain Ol’ friend. Hopefully with some tapas, flameco and Sevillian Fiestas and he’ll get his alegría del Futbol back.
Cool guy, he’ll be missed for that alone.

I honestly don’t know if he’s good or bad. It’s so hard to judge players under Arteta. Hope the loan works out for him.

Bellerin has been a gunner for 10 yrs now, and was at one time the most coveted RB under Wenger, and even Emery.

Arteta has a touch that turns gold into poo. Don’t blame any player, its only Arteta.

The ACL undid him. Lost a yard of pace, as have those before him .. Walcott, Matty Upson…

Hopefully he gets his career back on track and we can get an ok fee for him next year.
Not many of Wenger’s players left now.

8 players and some not good enough

Most of them tbh. He really did wonders with worse squads than the current one.

Yet played entertaining football. that’s what rankles me about the last couple of years.

Will miss you Hector. Gooner4life. That accent… and the documentary. 🙌

I hope he has a successful and enjoyable time, I love Hector and I’ll miss him a lot, but I think a change of scenery will be good for him. Hopefully he can get back to his best and enjoy his football, I’m pleased this has worked out for him.

Genuinely torn on this one, seems a real shame that his time at Arsenal looks to be coming to a permanent end.

He’s been great for us, and is a great human being too.

Hopefully the loan works out for him and he can rediscover his form, who knows he may even come back re-invigorated from his loan and want to challenge who-ever (hopefully Maitland-Niles) for the right back spot.

So we are left with a terrible Right Back & 2 centre backs who look uncomfortable in that position. Guess Arteta is going all in on 3-5-2

Good luck to Hector. Really like him as a player and person. Shame injuries robbed his pace. He was exceptional with pace, but less so without it.

But really great guy. Hope he settles well with Betis.

He broke into the team very young and like most young players his form dipped up and down. His pace was his greatest asset, hid his deficiencies defensively and that started to go at least 12 months before his ACL injury thus his form fluctuated even more regularly. I think from the time he became a 1st team player he has been over-relied upon and run into the ground…some fans were questioning what was up with him? was it the vegan diet? distracted by other interests? (I don’t know nor care about any of that btw, eat and wear what… Read more »

His pace started to go when he was overplayed carrying an ankle injury because we didn’t have anyone else. That was on Arsene.

This one hurts the most – he led by example, lives and breathes good values that we all want our Arsenal to live by, and up until a couple years ago, looked like the real deal. I still felt he’s our best RB option, but do believe a change of scenery will be good for him. All the best Heccy, hope you remind everyone what an amazing footballer and person you are, and hope you come back to us in a year’s time ready to own that right flank again!

I love Hector, but a loan move to Betis… ffs! Why not buckle down and rediscover your mojo at Arsenal? Surely a better way to get your move to a bigger club, if that was his ambition. Can understand needing a change of scenery after 10 years, but a little bit disappointed by his lack of fight tbh. We need leadership and experience and he could have provided that, instead he’s pushed for a move and ended up at a much smaller club. I get that he’s struggled for form, and Arsenal is a difficult place to be right now,… Read more »

Good player and better person. I’m sad to see him go, but wish him well.

Edu does not know what he is doing. We are buying like clowns wasting a lot of money 1) CBacks. We bought Saliba on 19 senior appearances for St Ettiene. Then everyone was having a wank that this was a good deal. Where are we now? Arteta as I have said does not know how to man manage and fully utilise his assets. Two perfectly decent assets (maybe not world beaters but good enough) again sent out to exile in Marseille. Now he keeps Chambes (we should have sold him) doe snot look convincing. Nor frankly any of our back… Read more »

Andrew A once fantasized in an article that in a decade Hector might become our manager; that would be lovely. However, I have a feeling he’ll have big success in business and who knows, maybe he’d like to invest in a certain Islington-based football club…

Gutted to see him go. One of my favourite players at the club

When yoir number one asset is speed and it’s taken away.