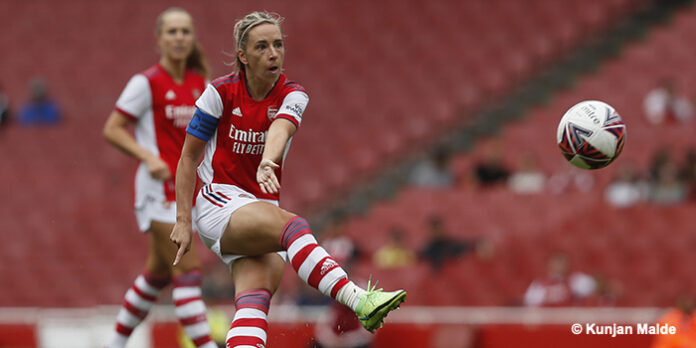 Arsenal have confirmed that Jordan Nobbs has sustained an injury to her ankle ligaments after being stretchered off during Arsenal’s 2-1 friendly victory over Chelsea on Sunday. Nobbs went down in significant pain after a challenge from Chelsea’s Erin Cuthbert.

Images of the moment of impact looked incredibly troubling with the impact forcing her foot into a right angle. The good news is that there appears to be no bone damage. Arsenal released a statement on their website saying, “Jordan sustained an injury to the ligaments of her right ankle during a tackle in our pre-season friendly against Chelsea on Sunday. She is now undergoing a review with a specialist to determine the recovery process.”

I am told the next 48 hours will determine the length of recovery time once the initial swelling subsides. Fingers crossed the injury heals soon but it is doubtful that Jordan will be available for this month’s Champions League qualifiers.

Arsenal face Chelsea and Manchester City in their opening three games too.

F`ck Chelsea for real… Her leg isn’t in two pieces after that challenge probably only because she saw the tackle coming and tried to pull away, what meant her foot wasn’t locked in ground in moment of impact.

Can we at some point get a break with this injury stuff. Playing Chelsea and ManC at the beginning of the season should have meant, that we haven’t got injured yet. It is so frustrating and annoying that we are getting our players ankles snapped in half in a preseason friendly for god’s sake.

Chelsea are a bunch of cunts. Fuck them. Speedy recovery Jordan, you’ll be missed.

Chelsea manages to take out one of our best players from each of the women’s and men’s teams in a “friendly” afternoon. Disgusting.

Cowardly challenge by a player from a shit club. Sick of all this nonsense. You cant prevent injuries when opponents are at best incompetent at tackling, at worst malicious in intent.

Lots of positives from Sunday wiped out in an instant by Jordan’s injury. Let’s hope surgery isn’t needed.
Was she deliberately targeted for a bit of a roughing up by Chelski? Don’t know.
Certainly the assault on Kim the last time we beat Chelski flashed through my mind although I wouldn’t see Erin Cuthbert as an assassin type.

Definitely, I think Ms Jupp has a future!
Jordan was in fine form until… and Katie has carried on where she left off. Frida looks to have hit the ground running too which is great.

Cuthbert is spiky and feisty, which is fine until player understands the line and that trailing leg is also part of players body that she is responsible of. Cuthbert and Stanway are both players who get lot of credits for their playstyle, while same time being reckless. I would have lot more time for debate about feistiness vs recklessness in competitive game, but just not in a freaking friendly. I don’t for a second believe that any of those players have intention to injure the opposition, they just doesn’t care enough to make sure that it doesn’t happen.

What are the odds…

Our mens and womens sides play Chelsea on the same day that two key central midfielders leave the pitch with ankle injuries caused by rash tackles by Chelsea orcs players.

To make matter worse, these injuries might mean both players miss opening league games against Chelsea and Man City.

I really don’t understand why we are playing pre-season “friendlies” against leading WSL competition (and the Spuds!) whether or not it is under the guise of a charity match.
It was only a shortened run out for what remains of the first team anyway so was of little practical use until the Olympians return.
Why couldn’t we play one of the better Championship sides, for example, then there could be no accusations of knobbling the competition?

And so it begins….the injuries, I mean.

Tim, would it be a sensible idea to speak with an appropriate club official in order to suggest a formal complaint be made to the FA or WSL in respect of the incompetent or malicious tackle. The complaint may request a suspension of a number of games for the offending “tackler”
This would address the issue of deliberately poor challenges in a proper and constructive manner.