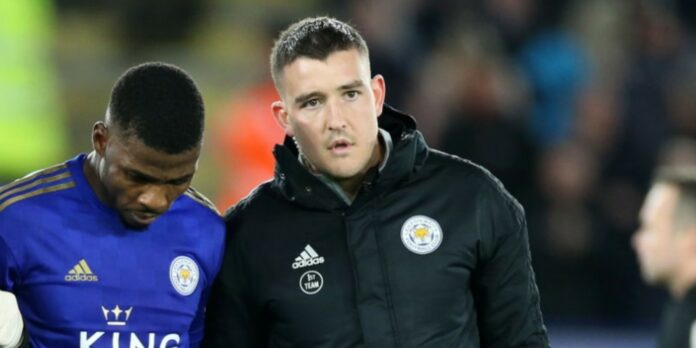 Simon Murphy has confirmed his appointment as Senior First Team Physiotherapist at Arsenal.

According to his LinkedIn profile, Murphy trained at the University of Nottingham and gained experience at Derby County before taking over the Head Physiotherapist position at Mansfield Town.

He went on to join Leicester City in 2014 and has been at the King Power Stadium for seven and a half years. During that time he gained his MSc at Queen Mary, University of London.

It’s been an amazing period over the past 8 seasons @LCFC . Thanks to all the staff and players I’ve been lucky enough to work with and call close friends. Memories that will last forever. Excited to have started the next thing! pic.twitter.com/pSjOF3fCzb

Simon will join a medical team at London Colney that continues to be headed up by Gary O’Driscoll. He’ll work closely with Senior Physio Jordan Reece and relative newbie Ricky O’Donoghue.

Arsenal decided not to extend the contract of Brazilian Bruno Mazzioti who joined from PSG last December. He’s since joined Spanish side Real Valladolid.

Best of luck to Simon, if you’ve got a magic sponge to hand, there’s a Ghanaian lad with a dicky ankle that could use it.

So all the Maddison talk was a smokescreen for the physio!

nah we’re signing the only one who knows how to handle Maddisons innumerable injuries!

Make sure you bring that James fellow with you, please and thanks!

Why? Maddison is always injured. We don’t need another Diaby, Rosicky, Partey on our hands.

In his last 3 seasons he’s made 36, 31 and 31 league appearances. That’s a record I can live with, a picture of health compared to Diaby, Wilshere, Ramsey, RVP etc.

Can he play at CM for the opener against Brentford please.

Play there?! Better if he could just fix the guy who should really play!!

Why do we need him when we have granit f. Xhaka. Midfield maestro. Nicknamed The Tortoise- both in feet and mind.

A M
Reply to  Cultured Determination

same guy who was motm vs france at the euros?
he isn’t the best mf in the world, but last season (bar both the burnley games), he played well imo

SarcasmB0t
Reply to  A M

The fact that some are so ready to accept Granit Xhaka as an acceptable starting midfielder for a club our size speaks volumes for how far we’ve fallen.

There are worse signs of our failings than retaining the Swiss national team captain. I don’t think the club has been averse to upgrading the CM positions. When the right player at the right price presents itself, or if someone from within the squad wants to be counted, Xhaka will not be a starter.

I am sure majority know, him staying is not ideal but the majority, thankfully don’t choose
to demonstrate that by calling him names and throwing insults, sometimes personal insults at him at every turn.

Personally..if he stays, then as an Arsenal player, he has my support for the season. Who knows some positive encouragement might even yield better results.

Once a gunner
Reply to  A M

With Pogba and Kante he boss them all

Fair play, got to admire someone who wants to take on more work. No rest for the wicked in the Arsenal physio room!

His real name is Joe Maddison. So the rumours were true !!Given the quantity of injuries at Leicester last season he should be a good signing for Arsenal

Chelsea get Kante we get Murphy

A Voice in the Noise
Reply to  Brady’s bunch

Give it a rest already. There’s no way of knowing if Kanté would have even chosen us ahead of Chelsea.
Look on the plus side, Chelsea also bought Drinkwater and look how that turned out.

SarcasmB0t
Reply to  A Voice in the Noise

They won the Champions League, that’s how that turned out.
Turned out they have so much money they can afford to miss out on a Danny Drinkwater.

Meanwhile, we decided to buy Granit Xhaka and we haven’t even qualified for the Champions League since.

Once a gunner
Reply to  SarcasmB0t

We will this season

Be honest. Did Xhaka steal your biscuit when you weren’t looking?

No, but he did throw away the Champions League in 2019 by needlessly conceding a penalty to Brighton in the penultimate game of the season. That after a year of poor play.

Oh, and he also threw the captain’s armband on the ground and told the fans to fuck off in a childish fit of rage.

Once a gunner
Reply to  SarcasmB0t

We all make or made mistakes at some point, for us to be a better person we need to forgive and move on that is the secret of life.

SarcasmB0t
Reply to  Once a gunner

My mom taught me to forgive people if they apologize.

Xhaka has not apologized for his behavior in the Palace game, therefore, I see no reason to forgive him.

Dude, that was like 2 years ago … get over it. We all need to move on from the gripes and grumps and start creating an atmosphere for success around this club.

“In this situation, I let myself be carried away and reacted in a way that disrespected the group of fans that support our club, our team and myself with positive energy. That has not been my intention and I’m sorry if that’s what people thought.” ⬆ That was a paragraph from his statement after the incident. So he sort of apologised and sort of didn’t if you ask different Gooners. I personally don’t care about the Crystal Palace incident. I just want the Arsenal-Xhaka Groundhog Day story to end. It’s been said that we should be hopeful for our coming… Read more »

Optimist
Reply to  Once a gunner

Has he ever even asked for forgiveness or shown remorse?

Fucking hell, another First Team signing. Will wonders ever cease….

After all, going to the doctor is closely correlated with having health problems.

Just to confirm that maddison will be coming in with good health?

Perhaps not the only incoming from Leicester if recent strong rumours are to be believed. A player plus cash deal for Maddison makes a lot of sense and is a step in the right direction. Confident, forward thinking, very technical, a midfielder that actually scores goals, the kind of player we’ve been calling out for. Injury record is a concern but one that’s been overblown given he’s never dropped below 31 appearances in a league season, which obv doesn’t include games he was fit for but not selected. Get it done.

Too expensive, too injury-prone, not a clear improvement over ESR, has “attitude issues” that we’ve refused to sign other players for.

A dumb, blunt, “statement” signing of the kind Manchester United used to make under Woodward – except United have money to burn and we don’t.

A fair case made against signing Maddison.

Maybe it’s just me but I am really desperate for something different to our table-football midfield. I really cannot take another season of Xhaka and Elneny being key figures in our midfield. I want Maddison or Aouar as CM signings because they’re progressive-thinking and multifaceted. At this point I don’t even care about the baggage either player brings.

Good luck to Bruno Mazziotti. I spent a year in Valladolid and wouldn’t wish it on anyone.

What’s wrong with it? I know nothing of the place.

Racist and unwelcoming. Swastikas graffitied everywhere. Also a complete lack of anything going for it except a flight a week to Barcelona and a high speed train to Madrid.

I was thinking… How does one go from PSG to Arsenal to Real Valladolid? Then I discovered that Ronaldo Nazario is the majority owner of the club.

Whatever happened to the Lewin brothers? I thought that Lewin the younger was still our physiotherapist.