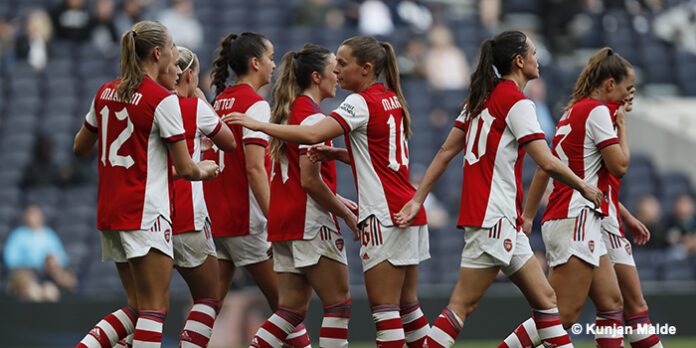 THE LOWDOWN
Arsenal kick off their WSL season against defending champions Chelsea at Emirates Stadium on Sunday. It doesn’t get much bigger than that- though Arsenal of course did manage to create quite the frisson this week with the signing of USWNT star Tobin Heath. Heath won’t be available for this game but her signing seriously bolsters the Gunners’ attacking options.

For now, the focus is getting the season off to a good start and Arsenal will feel they have a physical advantage over the visitors, having played three competitive Champions League qualifiers already during August. Chelsea, like Arsenal, had a lot of players away at the Olympic Games in Japan but, unlike Arsenal, they didn’t bring them straight back into the swing of competitive football. Arsenal ought to be a step above early season form and fitness.

The one you’ve all been waiting for…

Welcome to The Arsenal, @TobinHeath ❤️

That said, Chelsea are defending champions and they are favourites to land the WSL title once more and one look at their squad shows you why. They have the kind of individual quality that wins games whether they are controlling them or not. Arsenal haven’t beaten Emma Hayes’ side since the 5-0 drubbing at Kingsmeadow in 2018, losing four and drawing once against them in the WSL in that time and losing three cup ties to them as well- all away from home.

Arsenal have also effectively surrendered home advantage to play this game at Emirates Stadium and away from the more familiar confines of Meadow Park. Jonas Eidevall’s side then travel to Prague for the second leg of their final Champions League qualifier on Thursday night and they take a 3-0 lead with them to the Czech Republic.

WANT TO KNOW MORE?
If you are a newcomer to the Arsenal Women’s team, I wrote a player-by-player squad profile here.

TEAM NEWS
New signing Tobin Heath is still in the US and won’t be ready to make her debut for the next couple of games. Jordan Nobbs (ankle), Malin Gut (ACL) and Viki Schnaderbeck (ankle) will all miss this game while Fran Stenson has joined Brighton on loan for the season. Frida Maanum, Nikita Parris, Simone Boye and Mana Iwabuchi are all in line to make their WSL debuts for Arsenal.

LAST TIME OUT
This match finished in a 1-1 draw at Meadow Park last November. Beth Mead gave Arsenal a 1-0 lead after 85 minutes only for a cross to cruelly deflect off Lotte Wubben-Moy into the Gunners net to secure a point for Chelsea in stoppage time. The teams also met in a pre-season friendly at Emirates Stadium in July, which Arsenal won 2-1 thanks to goals from Katie McCabe and Freya Jupp.

THE OPPOSITION
Chelsea won the FAWSL and the Conti Cup last season, retaining both trophies in the process. They also made it to the Champions League Final before losing 4-0 to Barcelona. They are the team to beat in England at the moment and this summer, they have added Manchester United attacker Lauren James and highly rated young PSV Eindhoven defender Aniek Nouven to their ranks.

Arsenal struggled to play past Chelsea’s high press in recent seasons and their results against Chelsea are the single biggest reason that the Gunners have gone trophyless in the last two seasons (though they can still win last season’s FA Cup, which was delayed due to covid and will conclude in the autumn). Chelsea are the toughest opponents that Arsenal could have asked for on the opening day.

“Arsenal have history of great teams and winning long before I was the manager of Chelsea,” Emma Hayes said in her pre-match press conference. “They have always stood tall across Europe and in this country and they have done in every season that I have been here. Our games have always been an incredible battle and I don’t expect Sunday to be any different.

“It’s a new manager, he’s got new ideas and a lot of new players to integrate. I don’t have a lot of new players to integrate but I haven’t had the same level of time with them that’s he’s had. Them playing European games have helped them to prepare going into the season but I’m the sort of person to manage whatever situation we have and I’m pretty sure we will present ourselves in the best possible way on Sunday.”

PLAYER TO WATCH
Arsenal have a lot of choices at centre-half but I think Jen Beattie will get the nod alongside Leah Williamson in defence due to her ability in the air. In Sam Kerr, Chelsea have one of the biggest aerial threats in the league, despite her slightly diminutive stature. Nine of Kerr’s 21 strikes in the WSL last season were headers. She is excellent at finding space when crosses come into the area. 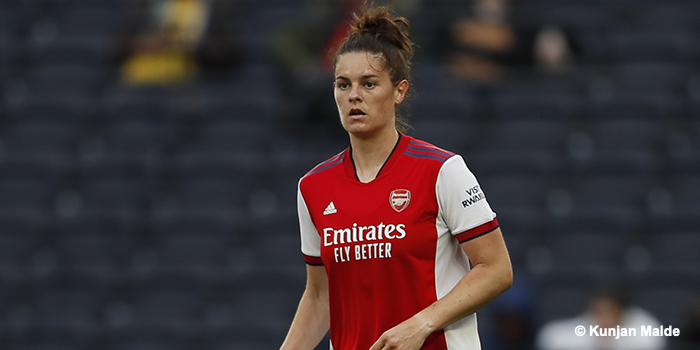 Beattie’s job will be to not lose her when Chelsea work the ball wide because Jen is Arsenal’s most aerially dominant player, winning 2.29 headers per 90 in last season’s WSL. Beattie is also a valuable component in Arsenal’s playing out from the back, placed on the left-side of the defensive trio, she is very good at arcing the ball up the left-touchline for Katie McCabe. She will need to be able to play around Chelsea’s high press too. 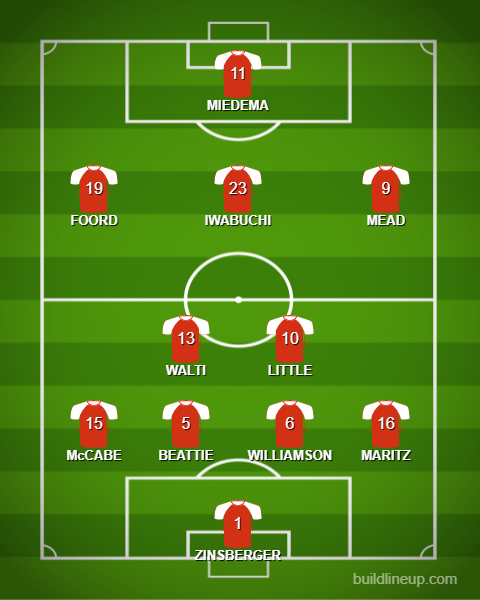 HOW TO CATCH THE GAME
The game kicks off at 12.30pm at Emirates Stadium, tickets are £12 adults and £6 concessions and are available here. In the UK, the match is being shown live on Sky Sports Premier League from 11.30am. The game will be screened, one way or another, in every territory in the world. This article will show you where in the ‘I can’t get to the games, where can I watch on TV or online?’ section.

COMING UP
We will have post-match reaction from Arsenal manager Jonas Eidevall on the site shortly after full-time. We will also have all of the usual build-up and reaction to the games against Slavia Praha on Thursday and Reading on Sunday.

For extra reading, I spoke exclusively to Gunners defender Anna Patten about the game and the season ahead.

Greetings, new Arsenal women follower here, watched the videos of the three recent CL qualifier games and learning the players from your profiles page.  So excited for the opening game tomorrow against the toughest opponent. Your “Last Time Out” link is a highlight from the blue side. I also found one from the Arsenal broadcast: https://youtu.be/20jNomBU4yg  Really close shot by Foord hitting the bar twice, great Miedema-to-Mead goal, and an unlucky deflection own goal. But if it was a draw the last time Arsenal should have a great chance to win tomorrow. Hoping Mana gets to play and can contribute to the… Read more »

Can’t wait to see to Chelsea get some of there high press medicine back. Bright has a mistake in her.
Still love watching Vic roast her last year.

I think Frida Maanum may well be in the starting eleven – probably our outstanding player this season. Given our past three years’ experience, I can’t help but be nervous. However, a perception had developed that Emma Hayes had Joe Montemurro beaten before a ball was kicked. With Jonas now in charge, the psychological balance between the managers should have radically changed. We’ve seriously improved our squad which has already come through three competitive games.. the trouble is it’s the hope that kills you! I’ll be there COYG! PS Have others like me also felt that Manu has looked more… Read more »

Psychology didn’t have anything to do with Chelsea beating Arsenal under Montemurro. Injuries were a big reason for Arsenal’s problems last year–Little, Walti, Maritz all missed a LOT of games, including Chelsea and ManCity games. And Chelsea also had better overall talent–and may still. We’ll see how things shake out tomorow.

tomorrow–spelled it wrong above! No edit function!?

Disagree… Psychology had a lot to do with Joe losing first to Chelsea and later all the big games. I have never seen a coach overthink as much for a game than that 4-1 loss in Meadow Park. Viki as RB, all the midfielders, no wide players… He didn’t trust his players to win that, so he tried to overmanage the opponent and failed. And for me he never recovered properly from that. That game had nothing to do with talent. Chelsea had also better overall talent than City and ManU and they gave Chelsea much tougher games last year.… Read more »

Agree totally with you Eelleen. Chelsea only had to step off the team bus and Joe was beaten. He did try and micromanage everything rather than letting experienced international players do what they are good at. That’s why we were abysmal against PSG too. Even Brighton could draw against Chelsea because that perception of “here we go again” wasn’t there. Jonas has no previous with Emma Hayes and from what we have seen so far he has our team pressing, pressing and more pressing. Chelsea will not like that. Get Leah and Noelle fired up for a physical encounter and… Read more »

Nothing to do with injuries. Joe tried to be clever and change the way we played against Chelsea, PSG and City and when it didn’t work he did not adapt the system quickly enough, or at all in many cases!
One of the best games from last season was when the players took control of their own destiny and outmuscled Man U.

Yeah I agree about the psychology!! And I’ve also had that thought about Manu, but with the level of opposition we’ve had so far it may be too early to tell though. I sure hope it’s true!

Manu’s problem was generally down to her starting position was too wide and she did not move her feet quickly enough to get across the goal.
Perhaps new coaching methods are in place now Jonas has arrived?
I also think she is a confidence player and she seemed to improve once she signed her contract extension.