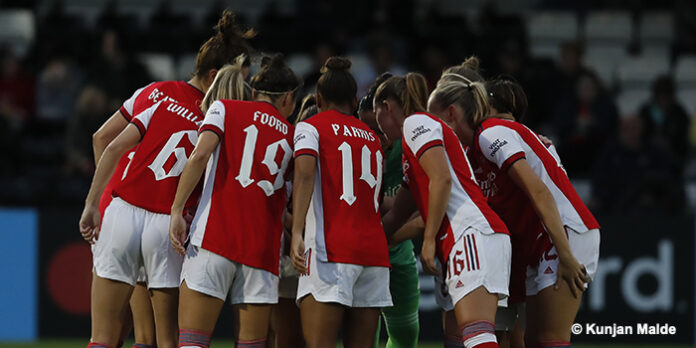 When is the draw for the group stages?
The draw will take place on Monday at 12noon UK time.

How can I watch the games?
All of the matches will be shown free to air on DAZN’s YouTube channel.

Who is the only British team to have won the Women’s Champions League?
The Arsenal Football Club.

I see what you do there by saying that Arsenal is the only British team to win CL but this injury are piling up now. Pls write something on it so we know situation of things. Thanks Tim

What’s the correlation between Arsenal being the only team to have won the WCL and an injury situation?

Wouldn’t be surprised if we get Juventus, though.

I would prefer us not to play Barca yet, don’t mind either PSG or Bayern. Tough game anyway, but would like Jonas to have more time to work with this team before Barca rolls to town. And also I would really really like us to get Juve from 3d group.

To see how we measure up against Barca, PSG, or Bayern will be interesting and exciting. I cannot wait for the group stage to start!

Yeah I’d also like for us to draw Juventus! Also, quite nice that we avoid Chelsea, Lyon and Wolfsburg in the group stage.

To the be the best, we have to beat the best. Bring on any of them !!!

Love the last question and answer. F**k you and your dodgy money Chelsea and Man City.

I love that last line ❤💋

Really hope we draw Servette, then I can maybe catch them live here in Switzerland!

Will the first two in every group go on in the tournament?
Will be interesting how we fare against the champs from the other leagues. Also, by then we will hopefully have had more time to get into a groove and to settle with Jonas’s strategies and tactics.
I’m pumped to say the least.

Good that being in pot 2 means we avoid Lyon, Wolfsburg, and (apparently!) Icelandic giants Breiðablik!