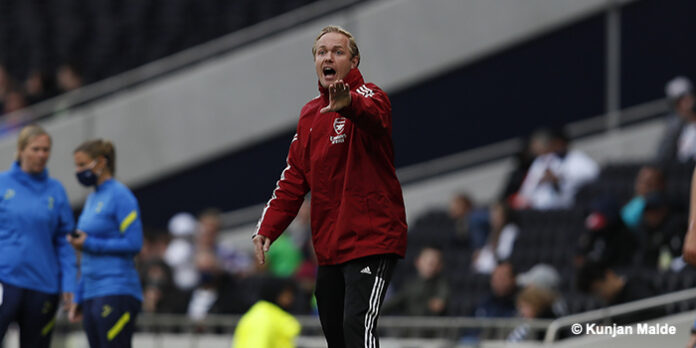 Arsenal progressed to the group stages of the Champions League with a 4-0 victory over Slavia Praha in Prague on Thursday evening thanks to a Vivianne Miedema hat-trick which took her to 100 Arsenal goals in 110 appearances. Kim Little completed the scoring with a penalty to confirm a 7-0 aggregate win. Arseblog News spoke to Jonas Eidevall post-match, the first four questions are from Sky Sports News, the others from Arseblog News.

On Vivianne Miedema scoring her 100th Arsenal goal…
It’s an incredible achievement, I am told it was in 110 games and 97 starts with zero penalties and that you have to remember. To score that many goals and for none of them to be penalties, I think the numbers speak for themselves. She doesn’t only score goals, there are also a lot of assists too. I am very proud to be a small, small part of her career and I think the club should be very proud to have a player like this. We are all very happy for her.

On whether Vivianne is the best player in the world….
I have not seen every player in the world but the things that Viv does with the ball and how easy she makes everything look so easy is on another level and it’s incredible to watch and to work with. The way she controls the ball and sees solutions on the pitch, she is definitely the best player that I have ever worked with.

On starting the season with five wins…
I am happy, I am so happy to be in the group stage, it is so important in the long and short term for us. We have a squad that can challenge any team in Europe and we showed that last Sunday by beating the finalists from last year’s Champions League. It’s also important in the long-term, for recruitment it is important to show that Arsenal is an international club that can compete internationally and for keeping players, which might be the most important recruitment that we can do, to show existing players that we have that ambition and quality and to get the experience from it. We will have six Champions League games this autumn and comparing that to playing in the Conti Cup group stage, it’s a massive opportunity for us to learn and develop and play against different styles. I am excited but I won’t get carried away, we have lots of work to do to raise the level of what we do.

On convincing Vivianne Miedema to extend her contract…
Nobody is trying to hide that we would like Viv to stay on but I understand from Viv’s perspective and the sort of player she is that it’s important for her to see the direction the club is going in and for her when the time is right to take a decision about her future. I am of the opinion that when you see the squad we have today that, of course, we can have external players coming in to make us better but the most important thing will be to try to keep the foundation of this group and to keep building with them. That’s sometimes harder in women’s football compared to men’s football because of the shorter contracts but we need to do both, to extend contracts and to get the best players possible externally.

On qualifying comfortably when lots of big teams were pushed very hard in the other qualifying ties…
I am pleased but I wasn’t pleased with the first half, we lacked energy and moved the ball way too slowly so we didn’t move Slavia or their defence. We were much, much better in the second half, especially with the substitutions that really made an impact in the second half. Overall though I am really happy and Slavia have made some good results in Europe and we were the unseeded team. I think three of the five ties, the unseeded team in the League Path won, which is not really normal. It shows the development of these teams and the League Path was extremely tough. For the future I think there are some great teams that should be in the group stage, like Levante, Bordeaux and Manchester City and I think that is a shame. I think that’s wrong for the competition.

On why the second half was better than the first half...
I think there could be a lot of reasons but we were playing with too little energy and we leave with a nicer feeling after the second half.

On whether the plan was to stretch Slavia by overloading the flanks…
Yes it was. We started well doing that. But we stopped moving the ball wide because they worked hard in the wide areas- they knew we were doing that. The problem with us not switching the ball quickly was that they didn’t need to cover that much ground in defence. When we started doing that in the second half, it’s not a coincidence that we started scoring. We made them cover more ground so they became detatched in their organisation and the game opens up. But if we hadn’t moved the ball that well in the second half then that wouldn’t have happened.

She is simply out of this world. I really hope we can sell her on this being the place to be at the top of her career

YESSSSS A VIV-STATUE!!! We need one for sure!!! I hope it could somehow embody her typical move where she fakes out a defender to then go by them.

Or, she could just stand with her arms crossed 😂 typical goal celebration

Gosh, I like how very honest he is with his assessments of a game. True, we all want to see Viv stay. But the only way to convince her is to show that we are capable of competing. The best players in the world want to win things. And if we are not doing that, then no blaming her if she walks. But my word, is she incredible! And I think having such a strong support cast is only going to help her even more this season. Also, Mead looks to be profiting from the competition for places. Hope she… Read more »

Was just thinking that about Beth. She has been extraordinarily productive, and I think she hasn’t played the full 90 minutes in any of the 5 games. Gotta love it!

I think anyone starting on the wings is likely not going to get full 90 minutes in most games. The wingers really tend to work their socks off in this system.

Fantastic victory, Arsenal Women. And once again, impossible to pick a POTM. I was worried in the first half. While we looked in control we also looked like we were never going to score and Slavia Prague could have nicked a goal from a set piece or a it of luck. I did think we defended better against them than in the home leg. Pressing again very much in evidence. Our forwards and midfielders have taken to a pressing game like a duck to water. Tobin Heath will be so excited to join this squad. I can’t wait to see… Read more »

The CR7 of female football..

She is SO good. We are blessed to have the GOAT at arsenal. Proud to be a gooner.

what an amazing record

Viv the goal machine. All hail to the Queen .. She makes it looks easy what a player she is, Viv keep banging in the goals. Wish both the male and female team a productive season. Arsenal ladies go make history by winning the ucl.

Am I the only one falling for this man Jonas? Just loves how he assess games, the ways he talks and how honest he his and his willingness to improve his team. Man I love this man. Maybe Mikel should come over and watch your training sessions maybe he might learn a few things to hard to his.

First half not so good, so good to see them step up for the 2nd half. Conserving energy/game management is one thing, but standards should be set. So i am glad jonas is not settling.

Patten can well be the surprise package this season. Taking her chances nicely.

I know women’s football is relatively new but Miedema should definitely be in contention for the greatest Arsenal players discussion.

Well there’s a fair bit of competition there!

Along with Kelly Smith and Kim Little

A fabulous hat-trick from our “super-striker” – what a team asset she is!
On the subject of statues, if one was erected now it should be of Kelly Smith, then a statue of Kim Little in around 5 years time, and then perhaps Viv, Leah & Jordan in 10 years time – although that’s quite a lot of statues so perhaps I’m getting ahead of myself!!!!!!!

They would need their own ground just to create space to put all of the statues!