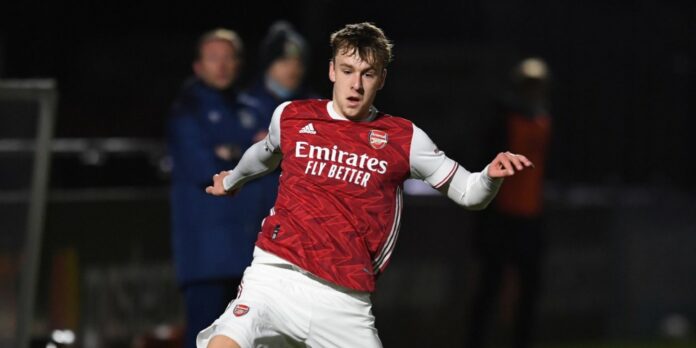 While some of the youngsters that Arsenal signed in the summer 2020 transfer window have been unable to make an impact, that certainly doesn’t apply to Nikolaj Moller.

The tall forward, who was previously at Malmo, caught the eye during his first season with the Gunners as he scored seven goals in 23 appearances for the U23s.

Although there were some occasions when he didn’t see much of the ball, Moller still managed to impress and demonstrated that his link up play is of a high standard.

Arsenal subsequently elected to make Moller available for loan ahead of this season and, somewhat surprisingly, the Swedish youth international ended up heading to the third tier of German football as he joined Viktoria Koln.

It was thought that the 19-year-old could potentially play at a higher level, but it was hoped that he would be able to receive plenty of game time.

So far matters haven’t quite materialised as had been anticipated for Moller, through little fault of his own.

Moller started the games against FSV Zwickau and SC Verl before being ruled out of the next two games.

He returned as a substitute against Freiburg’s second team but had to be substituted himself after suffering an injury and has missed the following two matches.

It isn’t clear when Moller will return to action but he will hope that he doesn’t have to spend a significant amount of time on the sidelines.

Arsenal have plenty of other young strikers in the academy, including the likes of Mika Biereth, Tyreece John-Jules (who is on loan at Blackpool) Amani Richards and Khayon Edwards, so there will be a challenge for Moller to make the breakthrough in the long-term.

However, if he can get back fit and make an impact for Viktoria Koln then it would put him in a good position ahead of his return to Arsenal next summer.

An eyebrow raising move indeed to one of the backwaters of European football, an interesting prospect nevertheless. It would be handy to have a striker of his size around the first team squad to provide a different threat and all the better if one could come through the academy.

I have to say that a was quite underwhelmed with this move although to be fair to them I don’t know anything about this club, they may have a reputation in Germany of developing young players, but I really can’t help feeling that a club at a higher level would have been more beneficial?