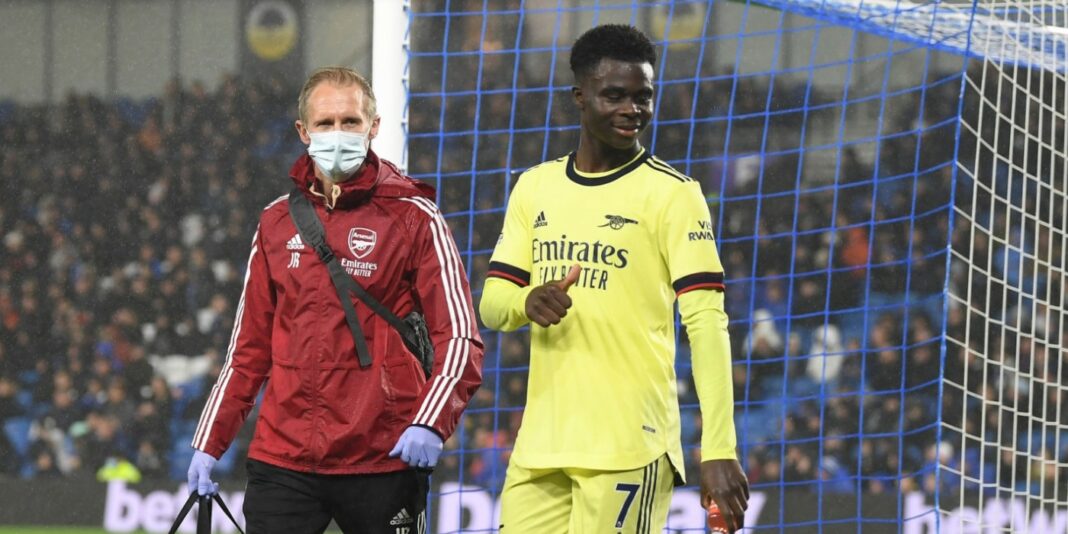 Mikel Arteta has played down fears that Bukayo Saka picked up a serious injury in Arsenal’s 0-0 draw with Brighton.

The England international went down clutching his right leg in the closing stages at the AMEX and was replaced by Ainsley Maitland-Niles.

While the player hobbled to the sidelines with a hand from the medical team, it didn’t look great.

Asked about the situation after the match, Arteta told Arsenal.com: “He got knocked, so they will check him. I don’t know how it is yet but he was able to walk so I don’t think it’s that bad.”

Saka is due to meet up with Gareth Southgate’s England squad tomorrow ahead of World Cup qualification matches with Andorra and Hungary.

If there are any doubts over his fitness, you suspect we’ll pull him out.

Pull him out of the England squad! We can’t afford it..

Oh dear.. from all you Xhaka haters this is the type of game he would of shone, our mid of Parthey/Odegaurd/Lacongo were awful, hindsight is a wonderful thing but should of put Elneny on early 2nd half & kept Auba on with Lacca, 2 points dropped rather than 1 gained .

Xhaka loves space and time. They got neither against Brighton, I doubt he would have made a difference.

Any chance you could apply for Arteta job 🤓

I don’t see how this is relevant to the article above….

Yeah, he’s obviously going to learn so much playing against Andorra.

In Ian Wright’s autobiography he said that he always benefited a lot from joining up with the England squad because he was training with top, top players for 10 days.

Kane’s always struck me as a bottom.

I hope we pull him out even if he’s healthy

Agree. He needs a rest.

BBC headline (Brighton being frustrated by Arsenal )…
My god …to what level have we descended..

So the BBC have come up with a clickbait headline designed to wind you up and get you to look.
And you went for it…

Give him a week away on a beach somewhere while the interlull bores the rest of us.

The lad desperately needs a break from football.