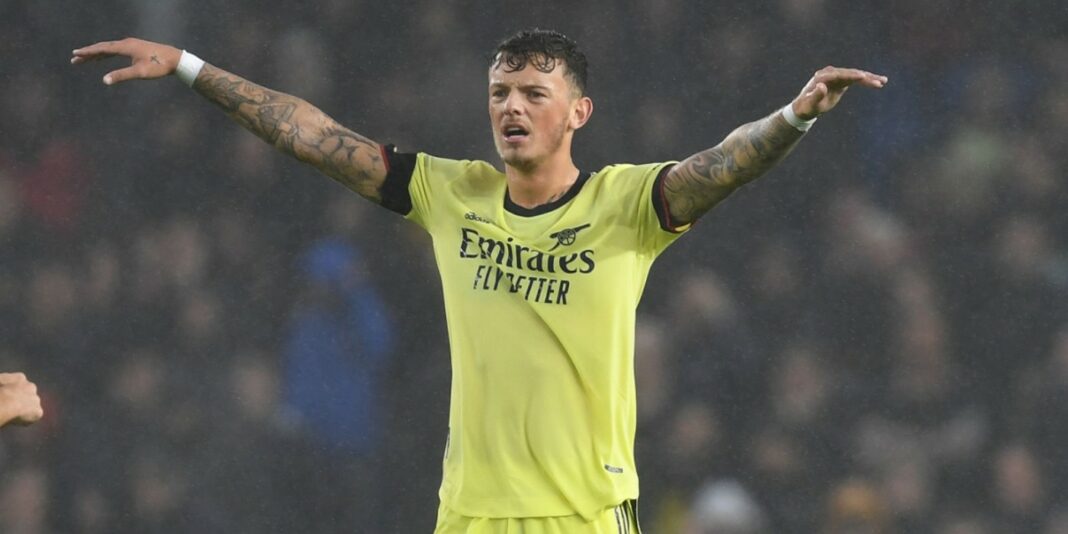 There wasn’t much about Arsenal’s performance against Brighton worth shouting about but Mikel Arteta was at least impressed by the efforts of his goalkeeper and centre-back pairing.

On a night when the weather conditions made life very difficult, something full-back Takehiro Tomiyasu referenced, the backline stood firm to secure a third clean sheet in four games.

On the partnership developing between White, who was facing his former club, and Gabriel, Arteta said: “Yeah, [I’m impressed] because they’ve never played together and because they have struggled a little bit with the language and they didn’t have any time to work together in pre-season either.

“They’re getting a really good connection, good chemistry, and I think their qualities match and complement each other really, really well. I think both of them today were terrific.”

A strong hand from Ramsdale was also needed to prevent Brighton from snatching a late goal. In a crowded box, the keeper clawed away a Solly March header as Neal Maupay waited to pounce.

While the summer signing wasn’t completely pleased with his kicking game, the boss said he’s already proved he has the personality to deal with high-pressure situations.

“The way we decided to recruit Aaron was [after] going through a big process where we wanted to know a lot about his personality, his character, the way he can handle playing under pressure at a big club,” said Arteta.

“He is showing he is ready to do that and I’m really happy with his performances and what he is bringing. That’s one of the reasons I think defensively we have been really difficult to concede goals.”

Arsenal’s defensive unit will now part ways for a couple of weeks with Ramsdale restored to the England squad and Kieran Tierney and Tomiyasu also set to travel away with their countries.

When they return, attention will turn to Crystal Palace and Aston Villa, two home games at the Emirates in quick succession.

Ramsdale happy to “shake things up” at Arsenal

Ramsdale: It’s not all doom and gloom

The way Aaron has made us forget about Bernd is impressive

Leno overall has been way better than Szczesny overall

Whoops just replied to the post above under my real name. Currently in the approval queue

Can whoever approves the messages delete it? And this one. Thanks

Any relation to Lee ?

Can we start Laca up top please? On a hard night away he is so much more a presence than auba.

This is just it with auba. Looks like a world beater in an open fast paced game in the sunshine, but in difficult conditions where he has to collect the ball a bit more in build up he’s almost unplayable. I agree Arteta needs to take a more flexible approach to CF selection. I would even through Pepe in as another option (better build up, good in the air, still very direct).

Just like the way Ramsdale dominates his area and “keeps at” the defence in front of him ! Not all about the flashy save & I like that !!!

Tough game but the clean sheet was a real positive and something else to build on. Graham Potter would be a good replacement for Arteta when Barcelona come in for Mikel. Our real rivals – Sp*ds, Leicester, West Ham in action today, hopefully a few points dropped there. That the Palace game is pushed back two days to the Monday evening (for the Sky Sports Monday Night Football Patrick Vieira tribute show) is a real bonus; gives us 2 extra days on the training ground and/or jet-lag recovery. Certainly be expecting 6 points in that Monday/Friday double header at The… Read more »

It’s fine margins. Clean sheet so they get praised. They could easily have conceded 3.

Feel like White should have been braver in bringing the ball out of defence. He has the capability to beat a man and then make a forward pass. We need to see more of that.

The entire team was awful beside the 2 cb and goalie. Partey was very wasteful in possession and lokanga was very timid especially in the first half.

Why does John moss look like he stuffed loaves of bread down his shirt? Or is it bulletproof vest?

I’m a little surprised there has not been more praise for Gabriel, who I thought had a great game. I have not rewatched it, so maybe my impression would change if I watched without real-time tension, but I don’t think so. He has been much more consistent recently, and against Brighton he was very active, compensated brilliantly for both Lokonga and Tierney (who both had sub-par matches) and partnered very well with White (who was also very good).

I’m a bit concerned about the ‘language issues’… Shouldn’t Gabriel speak decent English after a year in London? Or was he speaking Portuguese the whole time with Luiz last year?

Anyway, looks like it’s not harmful to his relationship with White, but I hope he can progress quickly on this front too.

After a year of being mostly stuck indoors? He’s said he’s more comfortable with the language. Everyone learns at a different rate, I don’t know what his previous educational background is, but that also plays a role. Look at Sanchez. He was here much longer and could barely say he was looking forward to walking his dogs. As a language teacher myself, it’s always surprised me that it looks like most clubs don’t hire language tutors for their players. It seems like massive oversight. After a year, I’d certainly expect him to be able to understand basic phrases, and be… Read more »

They do provide teachers, but it’s up to each individual how much they want to learn/study