Arsenal 1-0 Watford: By The Numbers

The CRISIS hot potato is going to spend the interlul scorching the hands of Ole Gunnar Solskjær in Manchester.

It wasn’t the greatest scoreline against Watford but it was a solid performance and in general, things are looking good for Arsenal.

Arsenal 1-0 Watford: By The Graphics 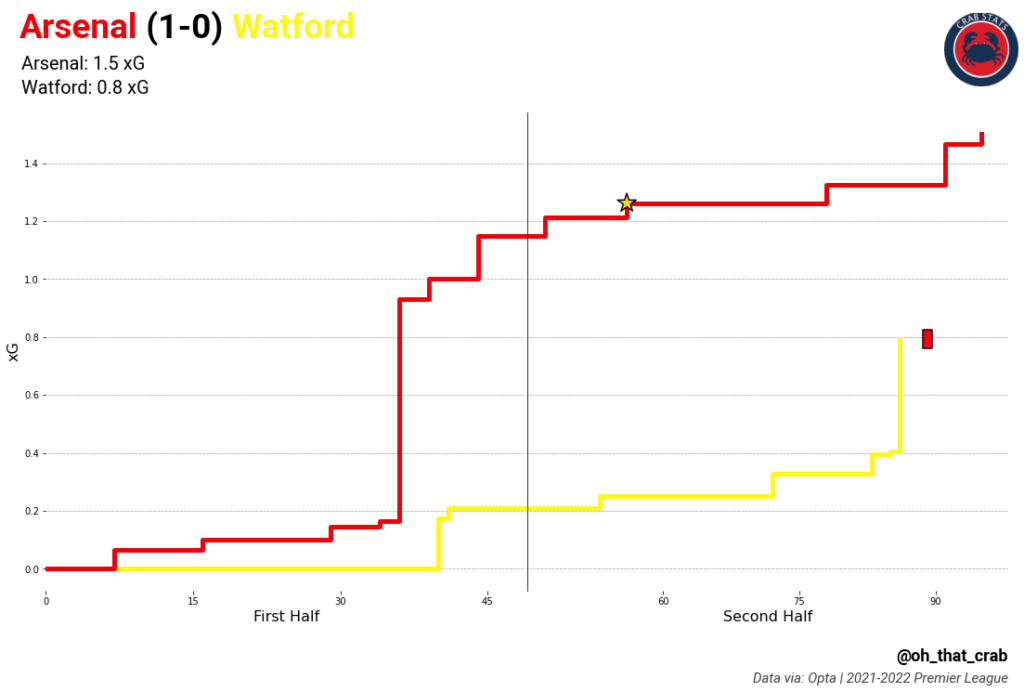 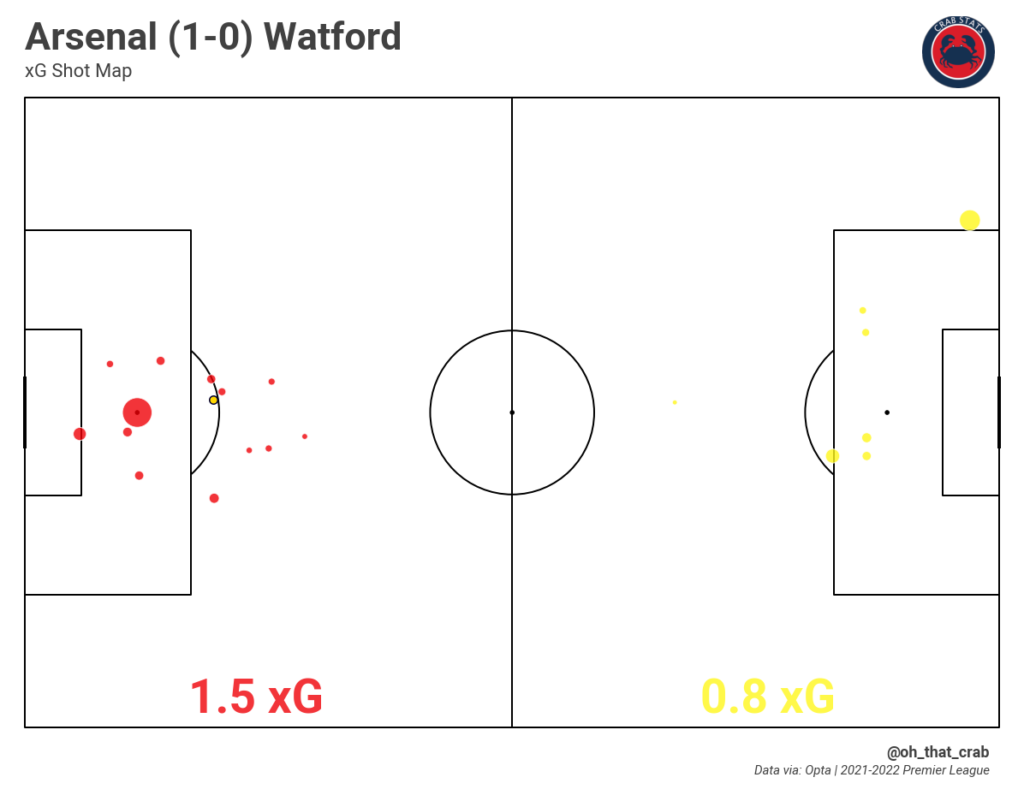 Arsenal 1-0 Watford: By The Numbers

69% – Field Title in favor of Arsenal before the goal

The numbers above paint a picture that we are pretty familiar with over the last few weeks. Arsenal are good to very good early in the match, and then drop back later in the match to see out the lead. 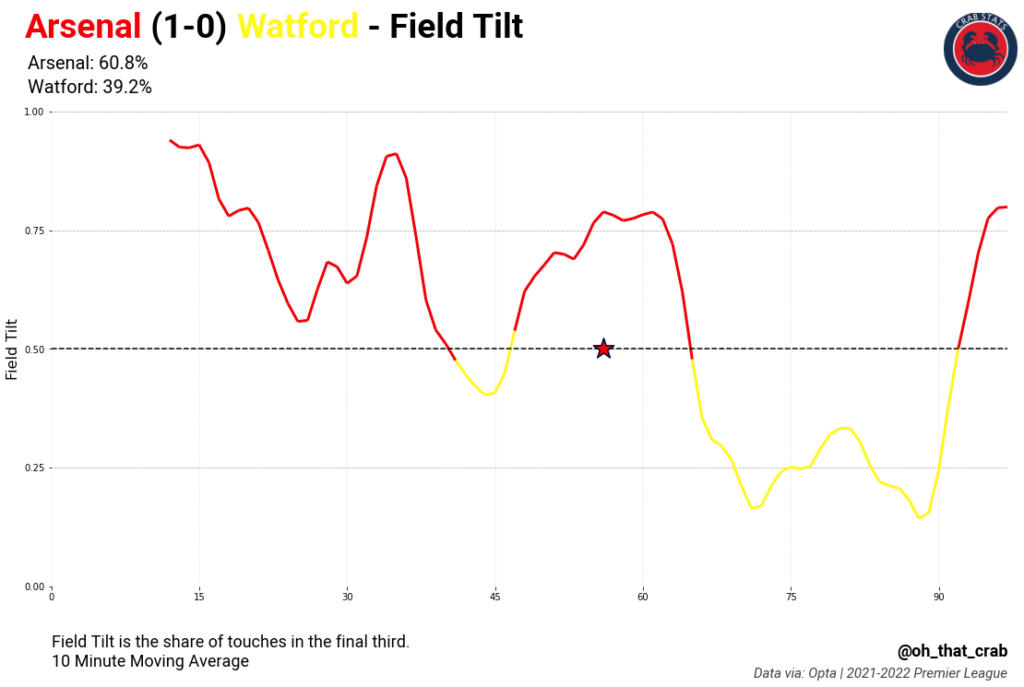 In this match, the actual goal came a little later than it had previously but the chances were there for Arsenal to score, and thankfully Arsenal kept pushing for that goal instead of coming to regret the missed chances. One of the interesting things is looking at how Arsenal are performing when the score is tied.

Arsenal have spent 389 minutes with the game tied and the same number of players as their opponents, during that time Arsenal Scored 7 goals (7.1 xG) and allowed 4 goals (3.2 xG). They have the second-best xG on a per 90 basis and the fifth-best xG against, with the second-best differential. Arsenal have been an average team when they are winning and a bad team when chasing a game (that City beating hurts a lot here even excluding the red card time).

This points towards Arsenal perhaps being a bit better than many would think based purely on the overall numbers. The other game states are important, and playing a passive style could mean that some of these 1 goal leads turn back into draws and dropped points. It is a positive sign among other still mixed signals about this Arsenal team.

0.5 – The expected goals of the two chances that were disallowed (correctly) for being offside. This counts if Pierre-Emerick Aubameyang controls the ball cleanly and shoots from the same location that he “passes” from, which would have been a 40% chance and Martin Ødegaard’s shot that Aubameyand tapped in which would have been a 10% chance but also went down as a “pass” in the event data.

21 – Times Arsenal were fouled in this match, 12 of which came in the first half. The previous high for Arsenal being fouled was 15 against Brentford. Watford did not come to play and spent more time kicking Arsenal than they did trying to score. It is a bit of karma that the goal came from an “unsportsmanlike” like move from Arsenal after they had spent most of the match being unsporting

9 – Progressive carries by the Lokonga (6) and Maitland-Niles (3)

When the team news came out that Tomas Partey was injured I was concerned, Partey has shown that he is a major part of the team’s ability to deal with pressure and distribute the ball effectively to the attackers. It was also a test of what Arsenal will have to deal with during the African Cup of Nations this winter.

I would say that Arsenal passed this first test with flying colors.

You could say that it wasn’t the toughest test given where Watford are in the table and that would be fair but sometimes it is nice to try out new partnerships in slightly easier circumstances.

In this match, Maitland-Niles took the job of supporting the left fullback while Lokonga stepped into Partey’s role. 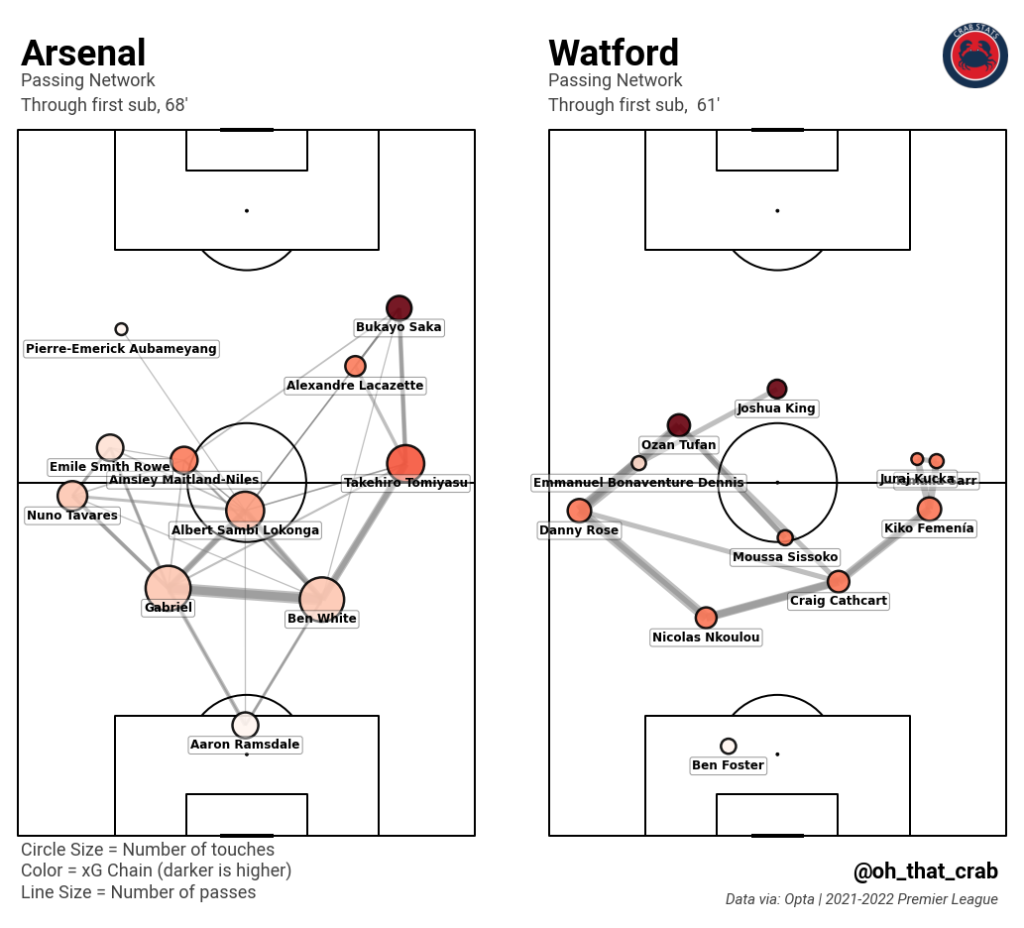 Lokonga was the central hub that things went through (he even took on Partey’s penchant for taking long shots, trying 4 shots, all from outside of the box). Overall I think he did so effectively, he got Arsenal up the pitch and did well to support the attack. Maitland-Niles showed his versatility in this match and his comfort taking up wide positions to effectively cover for Nuno Taveres when he went forward. He also showed that he is maybe the best one on one defender in the Arsenal team with his ability to win the ball back.

Lokonga has looked pretty good in his first few matches for Arsenal. 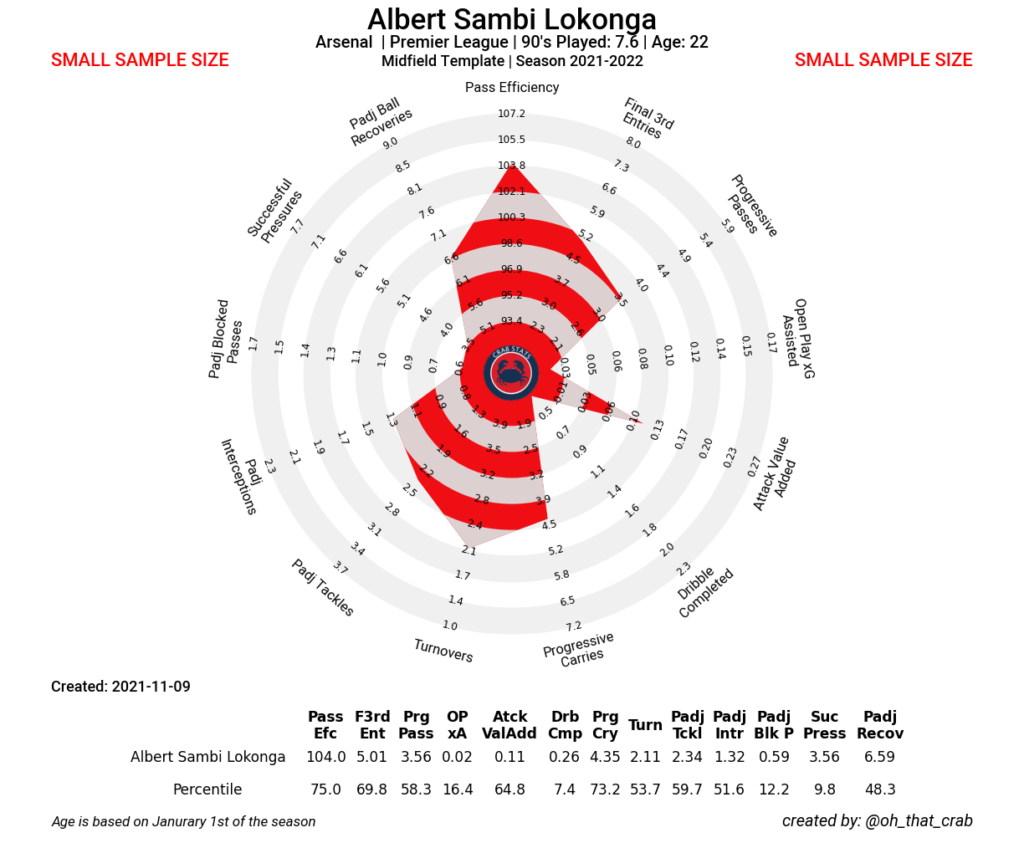 He has been a bit rough, especially on defense but considering that he probably was brought in with the view that he would be the third midfielder this has been a good production for someone thrown into the deep in of the Premier League.

Maitland-Niles has played less but has also looked good when his number was called pushing Mohamed Elney to the fifth choice in the midfield pecking order. 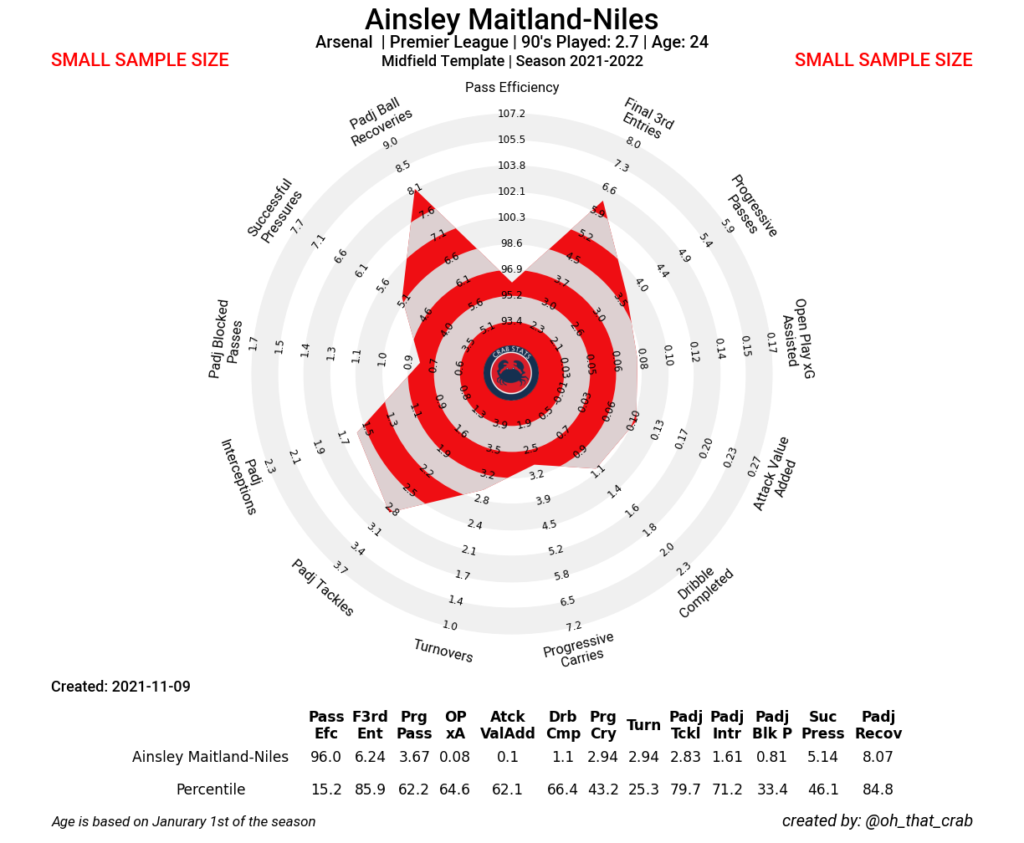 It might still be a bit thin when AFCON rolls around but at least the players that will be called on to provide depth will have had plenty of match time before then.

Sources: Opta via Whoscored, StatsZone, my own database. StatsBomb via FBRef.

Correction: An earlier version of this post had a graphic for Ainsley Maitland-Niles that had an incorrect scale. The graphic has been updated.

Loving these charts, thanks

It’s a shame that we have some tough matches in January and February when the ACN is on. Let’s hope AMN and Lokonga can step up when needed then. Lots of postives in the side now, especially defence (eg Gabriel 218 days since he lost a match, Ramsdale zero losses yet and he’s had more clean sheets than in his last two seasons) and the fight in the team overall. Only 4 of the current side played in the first three matches of the season, when we were weak relatively. Let’s hope we have our top team out for the… Read more »

excellent article as always Scott! a couple of comments/queries about the radar plots comparing Sambi and AMN: 1) is “turnover” referring to events where the player loses/turns over the ball, or events when the player causes the opposition to turnover the ball? it seems that higher is better (both in the direction the value is plotted and in the percentiles shown in the tables below the graphs, so I’m assuming it is the latter?) 2) it might be easier to compare Sambi and AMN if the max value along each axis was the same for both players. For example, the… Read more »

1) It is miscontrolled touch lost and disposessed.
2) That is a major issue! I was not aware of that and I will spend some time figuring out why that is. Part of it could be that I had to manually enter AMN position but the templates should have the same min/max for the same template.

Thank you for catching that, I have updated the graphic so that the scales match.

Great work Scott and nice touch as always DB.
One question regarding the midfielder position. Do you include all midfielders on the mix from someone like Özil who plays on high on the pitch to the wingers to the DMs? Because wingers and 10s are expected to try more and lose ball more in less critical areas. DMs on the other hand are critical. Maybe you could narrow down only to DMs because otherwise it creates a wrong image
But even if you don’t, thanks from a fellow data scientist

It is CM and DM, Attacking Midfielders are in a separate category

Thank you for the clarification re: turnovers, and for updating the graphics, looks great!

on a side note, I suspect that low pass efficiency is one of the reasons Arteta was reluctant to try AMN at CM until more recently. The comments from the manager about AMN’s greater focus of late are encouraging in that respect, because it feels like when AMN misplaces a pass it is more of a mental/focus thing than a lack of ability.

Why do you say Sambi “has been a bit rough, especially on defense”? He’s looked superb. Are you basing the defense just on not making so many blocks or pressures? Isn’t a huge part of defense positioning? Forcing the ball away from dangerous areas? Hard to track that on the stats. He’s looked absolutely superb in my opinion. He was great against Watford. The only error he made was one turnover in a costly area (luckily didn’t cost us), but he turns it over so rarely. Passing numbers are excellent. And against Villa he was absolutely superb. I don’t follow… Read more »

It wasn’t about this game just in general. He hasn’t been bad just been a bit drawn to the ball and sometimes not in the right spot.

You have data to support being “a bit drawn to the ball and sometimes not in the right spot”. Or is it just your observation. I don’t see that more than anyone else. I think his positioning has been excellent. He’s part of a midfield that has looked great and not leaking counters. That plays out in the lower expected goals against we’ve been seeing lately.

Nice analysis on ASL vs AMN. ASL is a bit lightweight and more of a Partey lite in his skills on the ball and taking on responsibility. whereas AMN offers more bite and pace. After his recent run I’m curious to see AMN alongside Partey against Liverpool, or even all three of them.

@Scott how do you measure the effectiveness of progressive carries. We all live midfielders who stride through midfield, riding tackles, but I’ve always wondered if it’s actually more effective to pass the ball. I saw Sambi carrying the ball forward a lot, which pads the stats, while AMN has a one touch pass (reminiscent of Wenger teams). Which is more effective?