THE LOWDOWN
Arsenal take on Barcelona at Emirates Stadium in the Champions League on Thursday evening with a gate of around 12,000 expected in North London. The Gunners are still smarting from Sunday’s 3-0 FA Cup Final defeat to Chelsea, in which boss Jonas Eidevall lamented, “we didn’t try to play our game and losing like that feels pointless.”

A game against comfortably the best team in the world is probably the last thing that Arsenal need at this moment in time, though any kind of result would rebuild any shattered confidence fairly swiftly. In terms of the group, this is as close to a free swing as Arsenal could hope for. A point guarantees them qualification for the quarter-final with a game to spare.

Join us for a big @UWCL night at Emirates Stadium! 💫

If they do lose, then they simply have to avoid a five-goal defeat at Hoffenheim on match day six to progress. Barcelona, meanwhile, only have to avoid a four-goal deficit to assure top spot in the group having already sealed qualification themselves as they seek to defend the trophy they won emphatically last season.

In reality, the manner of defeat will be the real point of post-hoc analysis. Arsenal were beaten 4-1 by the Catalans back in October. Barca thumped Chelsea 4-0 in the Champions League Final last season so that was in the expected range of outcomes. It will take an almighty effort to get anything from this game but even a spirited or narrow defeat would be considered a good response to Sunday’s disaster at Wembley.

TEAM NEWS
Arsenal are still without Leah Williamson due to a hamstring injury, while Tobin Heath has still not recovered from a calf injury with Jonas Eidevall not sure if she will be able to play prior to the Christmas break. Third choice goalkeeper Fran Stenson is not available as she was not registered in the Champions League squad, Malin Gut (ACL) is out.

A WORD FROM KATIE MCCABE
“We came in for recovery on Monday and dissected the (Chelsea) game and on the Tuesday we trained again. We were disappointed in the manner that we lost, it wasn’t us. We were disappointed but the beauty of the Champions League is that we quickly have another game to show how we can be better and perform, especially against a top quality side like Barcelona too.

“We played Barcelona a couple of months back in our first group game and it was our first Champions League game in a couple of years and the beauty of the group stage is that we get another crack at it. We are going into this looking at ourselves but we know the qualities they have. We will be looking to put on a good performance at the Emirates.”

You can read the whole transcript from Jonas Eidevall’s pre-match press conference here.

This will hurt for awhile. Thank you for all the support. We will bounce back❤️ pic.twitter.com/MEQfWOBij1

LAST TIME OUT
Arsenal were beaten 4-1 by Barcelona when the teams met in October with Frida Maanum on the score sheet for the Gunners in Spain. The last time Arsenal played at home to Barcelona in the Champions League, Jen Beattie scored a hat-trick in a 4-0 victory at Meadow Park. Kim Little scored the other goal on that occasion. Wonder what the odds are on a repeat on Thursday….?

THE OPPOSITION
Barcelona are pretty good, all told. They are the current champions of Europe, they won Liga Ibedrola by 25 points last season with a goal difference of +152. They currently lead the Spanish league by nine points after 12 games having won all of their league games so far. They have already qualified for the quarter-finals having won all of their group games to date.

With talent like Caroline Graham Hansen, Jenni Hermoso, Alexia Putellas, Lieke Martens and Patri they have a well-stocked squad but, really, it’s how they operate as a unit that impresses the most. As Jonas Eidevall said in his pre-match press conference, “They have so many ways of creating chances.” They can run through you; they can dribble through you and they can pass through you.

Barca have beaten Hoffenheim 4-0 and 5-0 already and vanquished Koge 2-0 away from home. That the visitors will dominate possession on Thursday is a given, it’s what they do. They will be missing Asisat Oshoala from the travelling squad, though winger Caroline Graham Hansen is fit and returns to the squad.

PLAYER TO WATCH
Jordan Nobbs did not get on the pitch at Wembley on Sunday in a move that surprised a lot of Arsenal fans. That is not to say that Arsenal would have magically won with Jordan Nobbs in the side, but given the team’s recent difficulties creating chances in central areas of the pitch, her omission was an oversight in my view.

The Walti, Maanum and Little midfield has been entrusted recently but in the interests of rotation at least, one would expect Jordan to start the game on Thursday and she will feel she has something to prove. Arsenal won’t dominate the ball so what they do out of possession will be critical and that will go for Jordan too if she plays.

Nobody that started the game on Sunday could complain about sitting this one out bar goalkeeper Manu Zinsberger. While wholesale changes are unlikely, I expect Nobbs to start in midfield, possibly ahead of Frida Maanum. In many ways, this game won’t really be a totally fair one to judge her but she’s a good enough player for every game she starts to not be a referendum on her quality. Arsenal need more presence between the lines and Nobbs provides that. Playing Jordan Nobbs isn’t about being nice to a loyal player, it’s because she is one of Arsenal’s most talented performers. 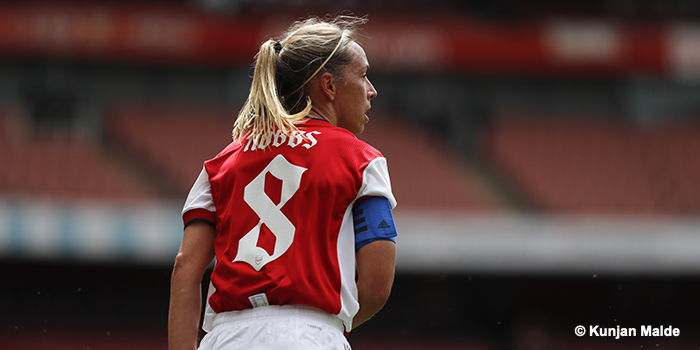 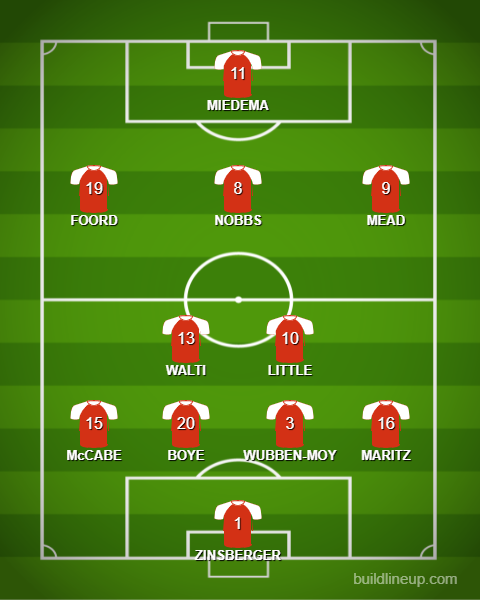 HOW TO CATCH THE GAME
The match kicks off at 7pm on Thursday at Emirates Stadium. The game will be shown live on DAZN’s YouTube channel un-geoblocked and free of charge.

COMING UP
We will have match reaction from Jonas Eidevall’s press conference on the site on Thursday evening, as well as the usual match reaction video. We will also post the line-up confirmations on Arseblog News from now on so keep an eye out for that at around 6pm. If you haven’t already listened, myself and Alex Ibaceta preview the game on the most recent episode of the Arsenal Women Arsecast with an exclusive interview with Lotte Wubben-Moy thrown in for good measure.

What else can we say? Hope for the best, expect the worst. As has been rightly said, the most important analysis from this game will be the performance, not the result (unless it’s positive). I think as painful as losing the FA Cup would have been, regardless, the most painful aspect was the hopelessness of the performance. It was really shocking. A repeat of that performance and we will be shipping goals in this match. In any case, I hope we play better because they’re coming with a very strong squad. Caroline Graham Hansen coming back in this game is… Read more »

Let’s give them a good tonking. # Coyg

Where is Iwabuchi? Is she hurt?

I like the proposed formation–Arsenal need to pack the midfield and disrupt Barcelona in the midfield, and just get the ball forward one way or another.

I chuckled at Arsenal fans when Heath was signed–the overreaction. She’s a good player when healthy, but Heath is old(er) now and very very often not healthy. She missed loads of time at ManU–mostly a wasted signing–and is now out for an extended period–and the biggest games–for Arsenal. Very predictable–and poor value, I’m afraid.

Mana is on the bench where she usually is! Tobin’s signing may be seen as poor value from a minutes on the pitch perspective but I don’t think you can under-estimate the “value” of the statement of intent and just having someone like that around the squad to pass on valuble experience gained in a different work environment. Interesting point too, the team have had a considerably busier schedule up until now than in previous seasons and yet the long term injuries, touch wood, are not as prevalent as they have been in recent seasons so something has changed for… Read more »

Agree about the need for a tighter midfield. With lesser opponents everyone can spread out wide as soon as you get the ball and wait for it to come to you but against a hard press you need to focus on evading the press first before you can think about spreading the ball wide.

I can write about Iwabuchi’s sad injuries but I’ll skip it for now. No need to slam Heath at this point I think.

Still trying to process the Wembley loss, but let’s get that fighting spirit back. I’d be happy to see us give a good fight.