THE LOWDOWN
Arsenal Women have had a rollercoaster week. Last weekend, they were surprisingly and deservedly beaten by bottom of the table Birmingham City in a poor performance. It means Arsenal’s lead at the top of the WSL is a good deal more fragile with Chelsea coming to within one point of the Gunners if they win their games in hand and the teams meet at Kingsmeadow in February.

However, the week picked up considerably on Wednesday with the news that defender Leah Williamson has extended her contract with the club. On Friday, Arsenal followed that up with the signing of Swedish striker Stina Blackstenius from Hacken in Sweden followed by Austrian defender Laura Wienroither from Hoffenheim and Brazilian defender Rafaelle Souza.

Arsenal will also add Brazilian international defender Rafaelle Souza during the January transfer window but the focus will be fully on this Conti Cup quarter-final against Marc Skinner’s rejuvenated Manchester United side. United have won their last four games and look a different beast compared to the team Arsenal brushed aside 2-0 back in November.

It does feel a little strange getting a bye into a quarter-final but Arsenal have not won a trophy since the 2019 WSL title and lost in the 2019 and 2020 finals of this competition. The Swede will know the value of a trophy and the team will be desperate to make up for the disastrous 3-0 defeat to Chelsea in the FA Cup Final in December.

TEAM NEWS
Leah Williamson and Tobin Heath return to the squad for this game after recovering from muscular injuries. Both are likely to start on the bench. Nikita Parris returns after missing last weekend’s match with Birmingham, but Lia Wälti is not available after a foot injury forced her to withdraw from the Birmingham game at the 11th hour.

Caitlin Foord, Steph Catley, Lydia Williams and Mana Iwabuchi are away at the Asia Cup, Stina Blackstenius and Laura Wienroither joined the squad for training on Friday and are in contention too. Rafaelle Souza is not available just yet with some elementary paperwork still to be finalised around her visa. Malin Gut (ACL) is out. Fran Stenson did not play for Brighton in the competition during her loan spell and is therefore not cup-tied.

A WORD FROM THE BOSS
“United have really impressed me, they have really clear principles and are really good at executing them and I think they have developed a lot since we played them (in November). I’m really excited to play them and for me it’s one of the strongest opponents we will play against this year, so it will be a really good challenge for us and we are really looking forward to it and seeing a really good game between two good teams.”

LAST TIME OUT
The teams met at Leigh Sports Village back in November in the WSL and the Gunners were 2-0 winners thanks to goals from Vivianne Miedema and a Katie McCabe spot-kick. The teams met in this competition at the semi-final stage in 2019 when a Vivianne Miedema brace was enough to give Arsenal a 2-1 victory.

THE OPPOSITION
Following a slow start to life under Marc Skinner, United have hit their straps in recent weeks. They’ve won their last four without conceding a goal and have beaten Villa and Birmingham 5-0 in consecutive games. They currently sit in 3rd place in the WSL ahead of Spurs on goal difference and two points above Manchester City in what looks like a three-way scrap for the last Champions League place.

United have yet to win a major trophy following their reformation in 2018 (they did win the Championship in their first season) and a trip to Arsenal will be a good acid test for how far away from the top two United currently are. Their next three WSL games are against Spurs, Arsenal and Manchester City and by the end of those three games, their immediate potential will be a lot clearer.

Skinner’s side have started recent games aggressively, moving into quick leads with an intense, pressing style and Arsenal will have to be careful not to be caught cold, especially as they have not played for ten games. The Gunners have a huge game away at Manchester City on Sunday and United will hope that Arsenal have their eyes on Sunday evening.

🔊 @KatieZel believes our hard graft in training is starting to yield results on the pitch! 💪🔴#MUWomen | #FAWSL pic.twitter.com/FVjkmIPjbG

PLAYER TO WATCH
It’s likely that Stina Blackstenius will start on the subs bench, having only joined training on Friday. The Swedish league finished at the beginning of November too, so Blackstenius will be short on match fitness and we can probably expect a bench brief for her for the next few games. However, all eyes will be on the new signing.

Eidevall foresees a future where her and Miedema can play together with Miedema in a deeper role but he also told me on Friday that her ability to run in behind and punish high defensive lines was a big part of the reason he decided to bring her to Arsenal. Blackstenius should be seen as a “bonus player” for the next few weeks while she gets up to full sharpness but what a “bonus player.” 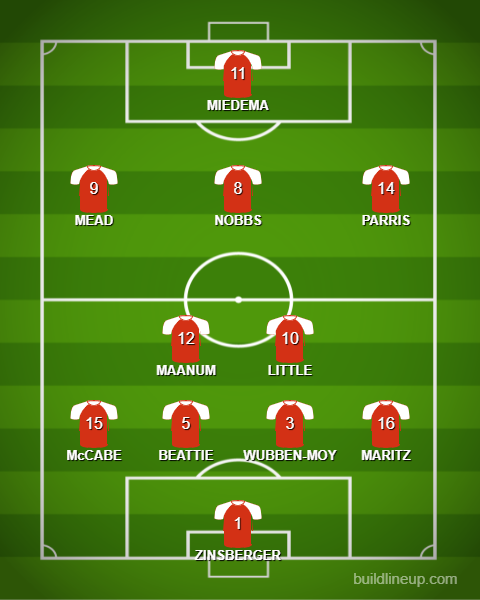 HOW TO CATCH THE GAME
The game kicks off at 7.15pm on Wednesday at Meadow Park and tickets will be available on the gate at £12 adults and £6 concessions. The game is live on the FA Player app and website all over the world. Word to the wise, if you don’t already have an account, sign up at least 30 minutes before kickoff. The site often experiences a rash of sign-ups five minutes before a game starts and the server has been known to be slow in those circumstances.

COMING UP
Hopefully you will have already seen the latest edition of the Arsenal Women Arsecast which has an exclusive interview with Arsenal defender Leah Williamson on her new contract. We also speak to Swedish football expert Mia Eriksson about the signing of Stina Blackstenius. We will have full quotes from Jonas Eidevall’s post-match press conference, as well as the usual post-match reaction video on Wednesday evening.

Four reactions to this: First, thanks for the preview. Second, why is Katie Zelem wearing big, fake eyelashes in that intervirew, conducted either before or after a training session? Not to be too critical–but they look hideous. And a fair number of other English players (Alex Greenwood, to name one) wear them as well–and in games, too. It’s bizarre. Why? And American female athletes do the same thing: We’ve got female track athletes who are wearing fake lashes, fake nails and hair extensions while competing! It’s mostly African American women who do it in the U,S.–odd cultural thing. I presume… Read more »

Wow. Why? Because they want to. Let’s concentrate on the football yeah?

She can wear whatever she wants.

That’s the end of that conversation. Stick to the actual football.

Bet you’re a stunner yourself, mate.

I am ignoring the sexist mumblings about what women should wear/how should women look. This starting 11 is more than good enough to beat ManU if set up right (it beat ManU 2-0 away from home without ManU having a half a chance). Also it is a myth that our squad is thin… Tim’s lineup has 8 subs from who 6 are international starters for their national teams. Some of them are not good enough for Arsenal who wants to win WSL and CL, but all of them are at least usable players if set up right. I personally hope… Read more »

Also I hope we send Teyah out to loan for the second half of the season. If Rafaelle and 4 Asian Cup players come back, she won’t even make it to the bench.

I am very curious. I really hope the signings + Leah’s signing is putting a new vibe into the team. I feel like they had lost something. I don’t think we’ll ever be able to put a finger on it, but it was clear something had to change. Having new players at training, and also the likes of Tobin back in training is bound to energize the team.