Laura Wienroither and Noelle Maritz: An Analysis of the battle for the right-back spot

In January, Arsenal made three signings in the winter transfer window. Stina Blackstenius and Rafaelle were both wanted prior to the winter window but the Gunners had to wait before procuring their signatures due to calendar differences. In Sweden, Blackstenius’ season with Hacken didn’t finish until November, making a summer transfer difficult.

The story was much the same for Rafaelle whose contract with Chinese club Changchun Zhuoyue did not finish until December. Blackstenius and Rafaelle were signings designed to be parachuted straight into the team and the spine of the team at that. Their signings were widely reported by this site (and others) ahead of time.

The day after Stina Blackstenius’ signing was announced, Arsenal announced the signing of Laura Wienroither from Hoffenheim. The signing of the Austrian was not reported on whatsoever prior to her arrival. Wienroither played for Hoffenheim against the Gunners in the Champions League group stage- she even scored an own goal in the away fixture, which Arsenal lost 4-1.

At the start of last season, Anna Patten, a centre-half, had taken the role as understudy to Noelle Maritz at right-back. Eidevall’s decision to buy Wienroither was driven by two factors. He told Arseblog News at the time, “I think it had been a limiting factor for us in the autumn that we had one natural right-back. We have lots of players that can play there but they play it a little bit different.”

Patten was loaned to Aston Villa and Eidevall also told Arseblog News that both Patten and Arsenal agreed that she should be considered a centre-half. “We have so many centre-backs that she has been playing at right-back but I think we all agree that her best position is as a central defender and that’s the plan, that she’s going to play there at Aston Villa.”

So, clearly, Eidevall felt the position represented a gap in his squad. He also wanted to promote greater competition for the spot. “It also didn’t bring out the best in Noelle Maritz because she had to pace herself during the tight schedule. So hopefully we can push her harder now understand that if you are tired, someone else can come in and play and do the same job. That was very much needed for us.”

Eidevall warmed to this theme earlier this season, telling us back in September, “I believe competition brings out the best in people long-term. When you are practising with a lion behind your back, that will give you the last 2%. Very few people, without competition, can drive that standard by themselves every day.”

The Austrian was introduced slowly last season, she started four of the 18 matches she was available for. However, she was used as a substitute eight times. This season, however, the tables have turned slightly in the competition for right-back. Maritz has played 301 minutes compared to Wienroither’s 599 at the time of writing (before Saturday’s home game against Manchester United).

Laura enjoyed an excellent Euros with her national side Austria. Following the recent victory over Leicester, I asked Eidevall what it is about Laura’s game that he appreciates so much, “She is very good at covering space. That is on and off the ball. When you see the way we play, the full-back will be in a lot of split positions. It is a key position for us in terms of balancing the team in offence and defence.

It seems like Eidevall really appreciates her off-ball positioning in a variety of scenarios, creating angles both for receiving the ball and defending transitions. That was a very useful insight from Jonas too because it’s something that data doesn’t really show you. However, I am going to see what the data shows us when comparing the merits of Maritz and Wienroither.

Firstly, let us look at the raw defensive data and set out some caveats. Firstly, defensive data is very “action biased” and not all good defending is calculable by measurable actions. Good positioning, for example, is not covered by data. I have chosen Noelle Maritz’s 2021-22 data against Laura Wienroither’s 2022-23 data (both WSL and UWCL only) just because those produce slightly better sample sizes.

We also need to acknowledge a further caveat. Arsenal have yet to play Manchester United, Manchester City or Chelsea this season. In those games, the Gunners will not have as much of the ball and will have more defending to do. One might reasonably expect for defensive actions to increase in those matches and attacking, or possession-based metrics to dip slightly. In short, Noelle’s data is more robust.

What we see here is that Wienroither’s “event data” is busier, she makes more tackles, more blocks more interceptions and more ball recoveries than Maritz, though she is dribbled past more often. That is likely because Wienroither is slightly more likely to engage against dribblers, whereas Maritz is more likely to drop off and block the route of the winger, forcing them into a less dangerous sideways or backwards pass. 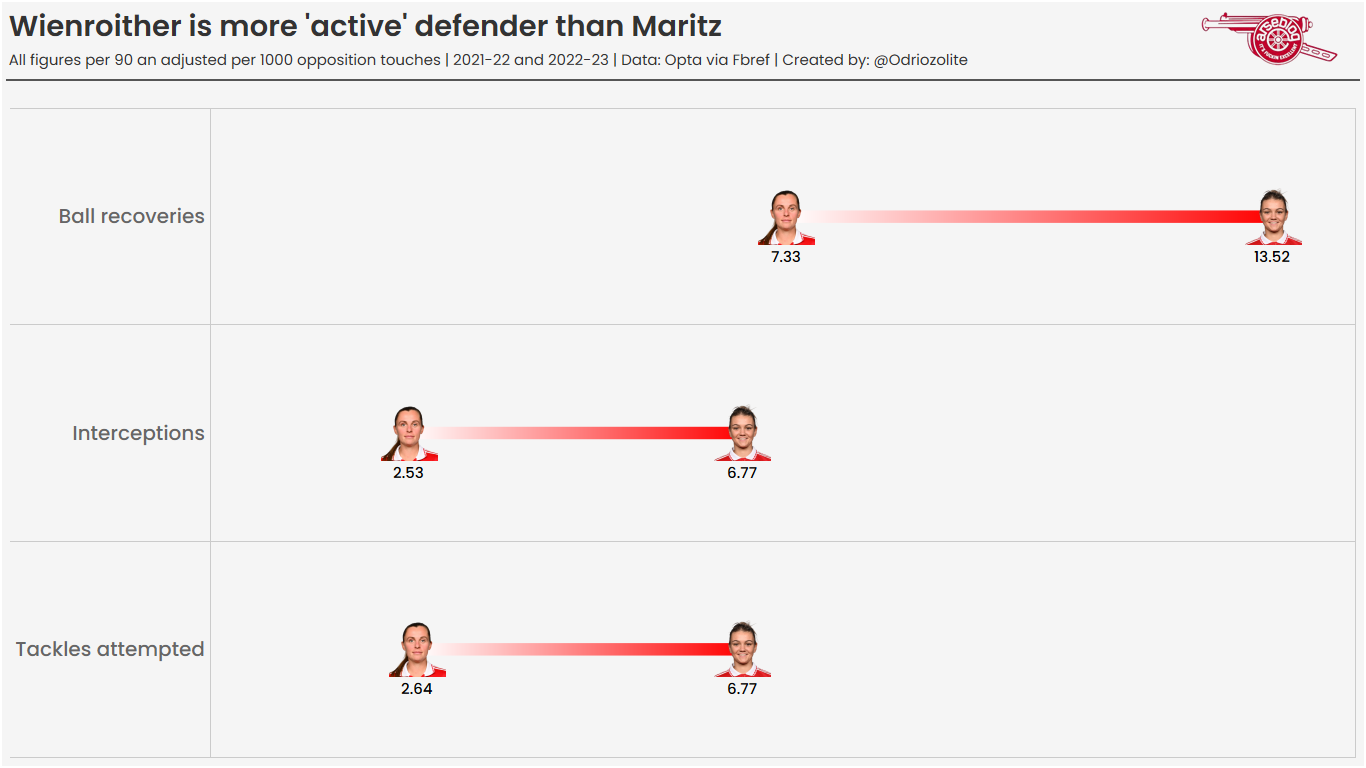 The data appears to show Wienroither is a more active defender (which is not necessarily the same as being a better defender). How about in possession, then? For Arsenal, a big part of the job for the right-back is to facilitate for Beth Mead, who often occupies the right half-space. Part of the job is either to occupy the left-back and take opponents away from Mead, or else provide an available outlet if and when teams double up on Mead. 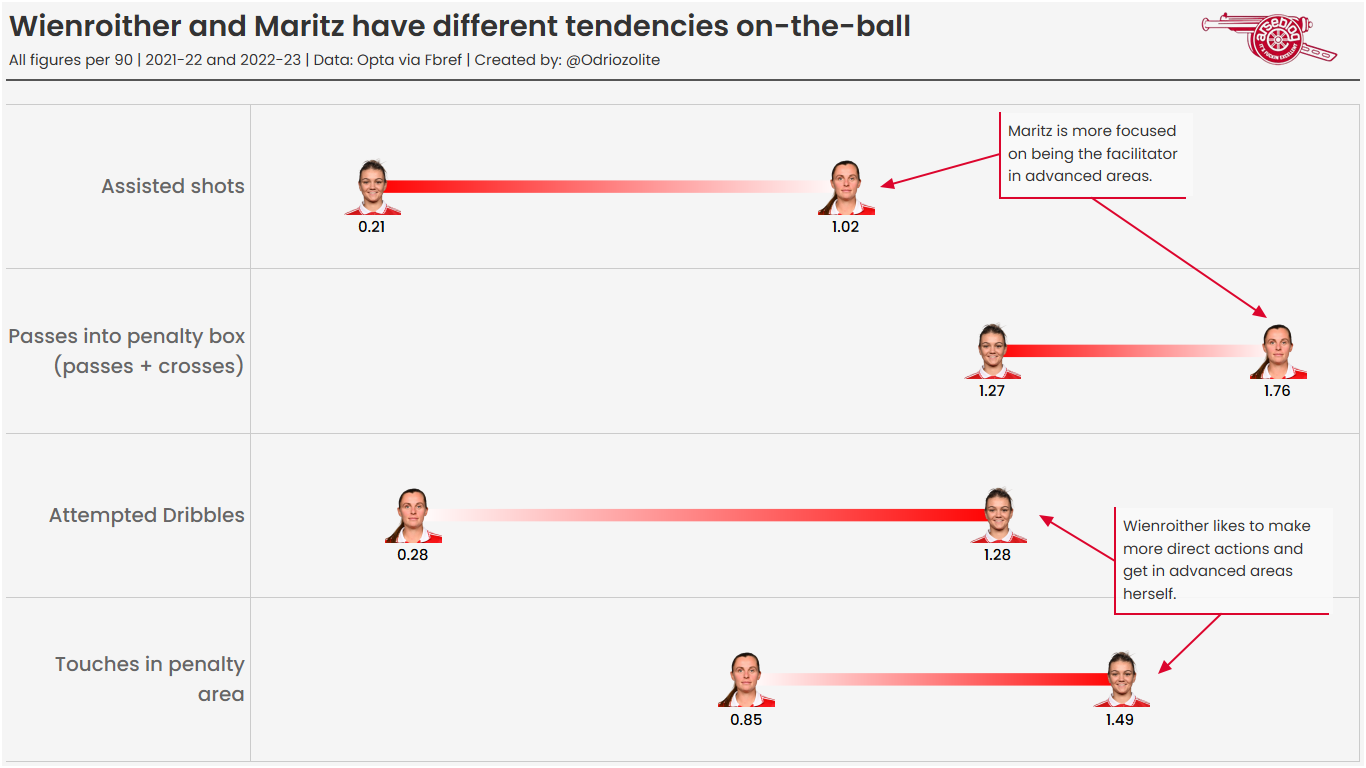 We see that Maritz has slightly more touches than Wienroither and more touches in the final third. What is interesting, however, is that Wienroither has more touches in the 18-yard area. Laura also attempts more dribbles while Maritz receives more progressive passes from teammates. Maritz is a very positionally aware player, as I think we see with her defending, whereas Wienroither takes more obvious, direct actions with the ball.

Very broadly speaking, I think Maritz looks to provide a decoy for Mead and looks to supply her with the ball. Wienroither focuses more on using Mead’s positioning to get herself forward into dangerous positions. When we drill down into the attacking data, a picture starts to build that demonstrates Maritz’s efficiency and maybe even her subtlety. 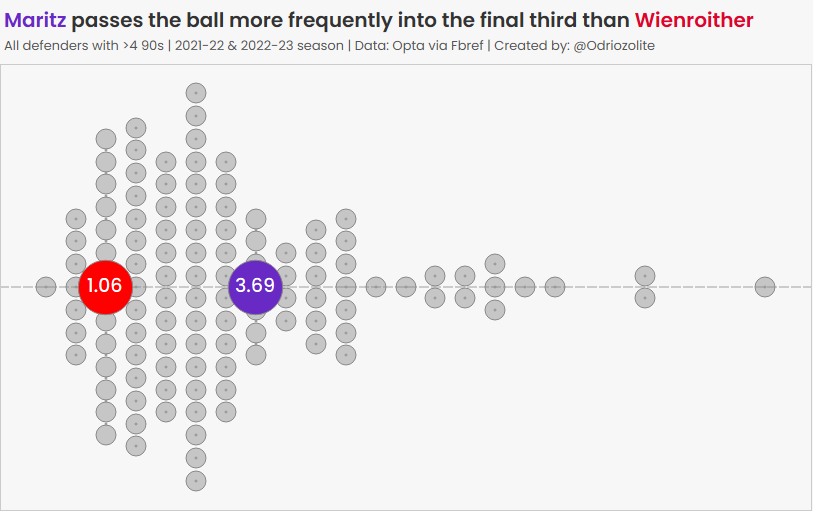 The dot on the far right of the image above is Leah Williamson, just to illustrate how much she wrecks the curve when it comes to defenders passing into the final third. That is not insignificant if you are Arsenal’s right-back. It means you are playing directly beside a centre-half who wrecks the curve for progressive passing.

Maritz assists more shots, passes into the final third more often and attempts a shade more crosses and progressive passes, leading to more shot creating actions. Again, very broadly I think a lot of this is because the Swiss does a lot to facilitate for Beth Mead, who is a very shot-heavy player. Maritz does a lot of good build-up work near the touchline and in the right half-space.

Wienroither, I think, is slightly more focused on getting into the final yards of the pitch, next to the by-line. It’s arguably a more advantageous space but more difficult to access. The only dataset with a really wild divergence in there is the “passes that enter the final third.” Maritz does that far more often than Wienroither which is probably because she is more often in those middle third type spaces.

Eidevall told us in September, “We have a similar situation at left-back with Steph Catley and Katie McCabe. They’re not the exact same type of player, they have different qualities like Noelle and Laura, so of course, sometimes that quality of a player might fit the opponent with the style you want to play.”

The differences between Maritz and Wienroither are subtle but speaking incredibly generally, I would say Maritz is more of a positional full-back who creates space for the likes of Williamson and Mead to get on the ball. As a defender, she is very positional too, preferring to block off angles.

Wienroither is a little more ‘active’ in the respect that she engages attackers and looks to take the ball off them. In an attacking sense, she likes to use the space created by Williamson and Mead to take direct attacking movements herself. As with the left-back situation, this is incredibly healthy for Arsenal, they have two very high-level right-backs who offer different qualities and strengths.

With thanks to Yash for the data viz, who you can (and should) follow on Twitter @Odriozolite

Really like how accessible you make tactical analysis. Has been really helpful to with understanding the game better.

It’s crystal clear that our Right Back position is very well covered!