Since taking a mid-autumn sabbatical to Adelaide in November, Vivianne Miedema has scored three goals in three games. She hadn’t scored in her previous six appearances prior to that. In fairness, four of those were sub appearances but the fact that she lost her place to Frida Maanum in the advanced midfield role told a story in itself.

There are obviously significant soft-factor reasons for Miedema’s revival, not just in her goal scoring form but her overall play. Now, three games is too small a sample size to draw definitive conclusions and the games are not equally weighted against season averages. Everton and Juventus are better teams than the likes of Brighton, Reading and Spurs, who are accounted for in the second column.

Unfortunately, no data is collected on Champions League qualifiers either, so the two-legged affair with Ajax, another of Arsenal’s tougher opponents this season, is not accounted for in the season average data. Undoubtedly that tie would bring some of the season average numbers down for Miedema but you can see some patterns emerging in recent games, she is taking more touches, has more shot creating actions, more progressive passes, a lot more shots and higher XG.

One of the notable things in the data is that Viv’s numbers begin to jump any further when we just take the last two games, as opposed to the last three.

This dataset takes out the away draw with Juventus, which was probably the most difficult of the last three fixtures. The two games shown here were both at home and that has an impact too. However, to my mind, the most significant impact on the data is team selection. Jordan Nobbs started on the right-wing in Turin, in the two subsequent games Katie McCabe has started on the right as an inverted winger.

As a left-footer, McCabe naturally wants to come inside on her left foot, whereas ordinarily Beth Mead would be on the right looking to run in behind full-backs and attack the penalty area. In short, McCabe takes up deeper positions, more creative positions associated with build-up play. As a result, Miedema has pushed higher up the pitch. I spoke to Viv about this on Tuesday and here was her answer, referring to the Everton game.

“I picked up in the game easily and quickly was that if Katie does want to receive the ball and come inside, I need to position myself in that opposite pocket. As a team we have been working a lot more on shifting the ball from one side to the other and you could see that against Everton over the weekend, we’ve been a bit more patient. The switch of play is where the goal came from as well.” Here is the goal Viv scored against Everton.

You can see the goal comes from a switch from Laura Wienroither from the right flank and Miedema appears in that “opposite pocket” she spoke to me about on the left-side of the field. She is primed in the penalty area ready for that switch of play. Now look at the goal she scores against Juventus.

Miedema is again on hand on the left side of the penalty area to receive a cross from the right. As play is built from the right, Katie McCabe is barely in the shot at all. Williamson finds Blackstenius in the right channel and Laura Wienroither makes a decoy run to make space for Blackstenius. McCabe isn’t involved in those wide positions in this scenario.

Essentially, a shift in emphasis has happened. Very broadly speaking, Katie McCabe has become more of a third midfielder while Vivianne Miedema can be considered more of a third forward, or maybe even a left-sided number 10 with McCabe as a right-sided number 10. The graphic below illustrates what Arsenal have been used to under Jonas Eidevall. 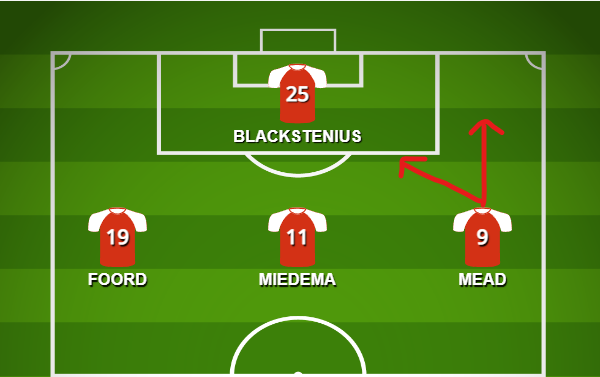 Mead plays on the right and she makes moves towards the penalty area. With McCabe, that changes. 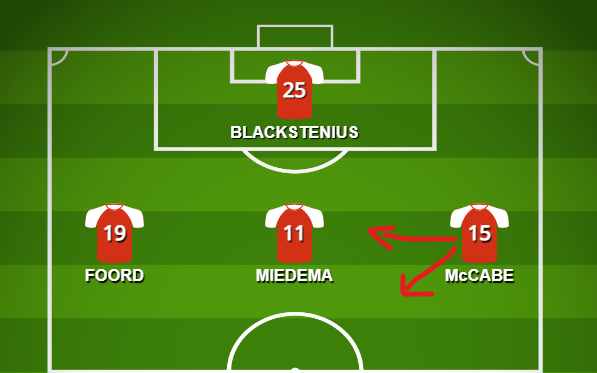 This would mean McCabe and Miedema patrolling the same area. But in the last two games, Miedema has adjusted her movements so that it looks more like this. 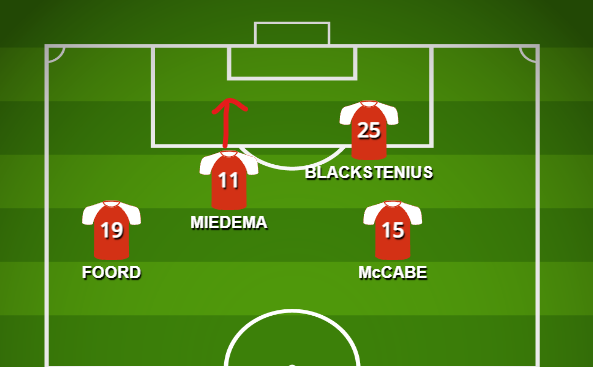 Miedema pushes slightly more to the left (though Arsenal’s 10, be it Miedema or Maanum, does tend to drift left anyway) but also more towards the penalty area. McCabe’s presence reduces the creative burden on here between the lines, even if it means the team is not creating as much on the right flank any longer.

The sample size is still small, of course. However, this is a trend I would look at over the next couple of games with Mead and the right central-midfielder, Kim Little, out with injury. It’s certainly a tactical adjustment that Arsenal have made, switching play from right to left more quickly and, positioning herself in that “left-pocket”, Miedema has benefitted by pushing higher and scoring from this area in the last clutch of games.

Previous articleArteta on Smith Rowe, Jesus, and January
Next article‘Lotte has really proved herself’ Eidevall talks up Arsenal’s defensive improvement

Fantastic analysis once again. Thanks for bringing the depth of analysis the fans so desperately want for these games.

thank you, Tim, also Stina is changing her positioning as we can see in the Juve fixture, she moves to the empty right angle leaved for Katie and gave an excellent assistance which Viv resolved flawlessly. Some commentaries in twitter complaint about a boring the last game but was really a very interested one from a Chess-Football perspective and smart controlled for the girls.

Stina is such a brilliant off the ball front runner, finding spaces just at the right time to be fed the through ball, plus she is a pretty good goalscorer too!

She finished her no-goal surperbly. If only she could learn to stay onside!

It’s been a rapid adjustment to how we play, but I’m so impressed with how quickly they’ve improved. Laura, Katie, Viv & Stina have had to completely change their movement & they’ve done it well within three games. Top work!