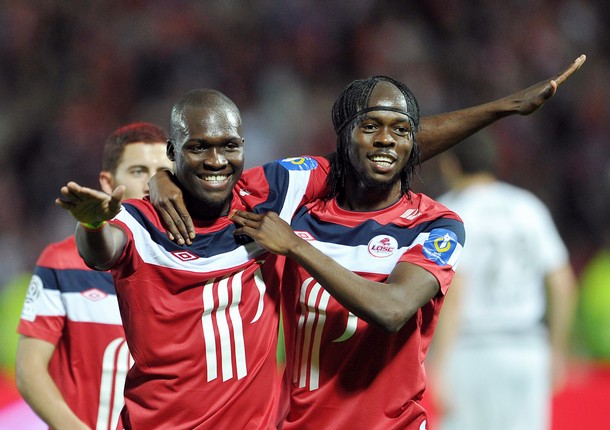 The agent of Lille winger Gervinho has refused to be drawn on the future of his client amid reports that several Premier League clubs are interested in signing the 24-year-old.

The Daily Mail reported this morning that in a bid to steal a march on Premier League rivals Arsenal, Newcastle United and Tottenham Hotspur, the Citizens sent a delegation of officials to France in the hope of finalising a deal for the Ivory Coast international.

It has been strongly suggested that the Gunners are City’s biggest challenger for the £8 million signature of Gervinho, with the player only willing to leave the French Ligue 1 club for a club in the Champions League.

“It is difficult for me to discuss the situation because it is confidential, but it is true that many clubs in England have contacted us concerning the availability of Gervinho.” Seb Boisseau told Arseblog News.

“But we have not only spoken to clubs in England, but also Italy, Germany, Spain and France. The player wants to leave Lille and his priority is a move to England, however, it is difficult for me to speak about one club for the player. He wants to leave and has contacts with England and he is determined to play in the Premier League next season.

The player’s representative was then asked if Arsenal was indeed a “dream” destination for the Ivory Coast international as intimated by the player himself.

“For the moment it is confidential, and we will wait until Gervinho makes an agreement with one club.

“I think a decision will be made regarding his future by the end of the week.”

Another ACN player to fudge through January without.

Then we’d have both a Kevin and a Marvin … it’d be just like signing two English players. (Yet without our national characteristic to message iffy photos or shag OAPs, mate’s girlfriends, or Z-list celebrities… etc)

A pretty good and underrated player. For me the best player of Lille.

You are right..He is the real deal in that Lille team.

Nice idea for the ArseBlog News!
Anyway just hoping we dont sign this guy at all, will sum up Wenger’s ambition with the type of player he is after again, French Ligue =/

We certainly need a striker but this fella won’t do. Would prefer Gamerio but he may cost too much for the clubs liking. Dare I say it, Arshavan may not be a bad partner for RVP in a 4-4-2!

The comments seen so far are judgmental n without basis. Gervinho is exactly the kind of player we need. I have been watching him since he represented his country at the olympics, where he was the captain, and he has been steadily raising his game since then. He has all the requirements of the best arsenal players of today: good first touch, keeps the ball well and knocks it around well. But what makes him so inpressive is the fact that he has the qualities of the arsenal players of old, the things lacking from arsenal players of today: strong,… Read more »

This guy is actually really good. He’s very skilled, tenacious, shoots a lot, and scores a lot. And he’s tough. I don’t see any problem.

Everyone is saying he’s rubbish but I doubt anyone actually knows the first thing about him: Just unintelligent longing for some (any) superstar signing.

I couldn’t care less about who he is or how silly his haircut is so long as he scores 20 goals. And if we sign him, I’ll bet he will.

Gervinho is a perfect player for Arsenal. He can play AMRLC, SS, he is quite tall, bless with good speed, crossing ability, and love to finish as well. He is better than Eden Hazard and cheaper. He is a Gooners, so his priority will be Arsenal not ManC, even if his wage maybe not as much. Theo Walcott will be benched if this guy come. (His natural position is winger right, not a striker Kas) Gameiro? 1m72? Can only play as a striker? Are you kidding me? n Marvin Martin? 1m70? with the already crowded Aaron Ramsey, Jack Wilshere, and… Read more »

As for this fellow, he’s the right age, sounds like he has enough quality, versatile… What’s the problem

Not seen anything of him tbh but gooners here sound positive about him. Goes without saying we need a winger. Nzogbia is also available and would surely love to join us. With theo on the bench we wouldn’t look too shabby on the wings. We’ll have to wait and see what happens though.

I would like to see him in Arsenal. Out of all the non-Real-Madrid transfer rumour names the media had tied with us (Such as Eden Hazard, Falcao and the other Porto dude), I think Gervinho is the better signing for Arsenal. We’ve eyed him before, in 2008, but I think it’s good that he played for Lille these two seasons. The fact that we have seen the potential before and he risen up to his potential, is much better than those other players that just had one good season like Falcao or Hazard. For 8m pounds he´s a true bargain.… Read more »

Great idea for arseblog news, I really like this idea, however I would hope all the news is originally sourced & not recycled & reworded like most of the other websites out there. on gervinho he would be a good signing for us because unlike most of our squad he has the right attitude towards working hard for his team.

Does he shave his forehead?

Hi guy, this is a good thing thank you Arseblog, Gervinho is a very good player, in my opinion beter than Nasri therefore if he doesn’t want to sign for us let him go!! How many people knows about him before we brought him to Arsenal??? As for the Boss it has been over three months since I last listened to his press conferences because I’m sick of hearing the same excuses so he better make sure his decisions are spot on this time round!!!!!!!

We combat male pattern baldness in many ways, but Gervinho’s should not be one of them. Geez. It’s almost like having a terrible lid is the best way to alert Arsenal scouts. Sagna’s spaghetti, Song’s pint of Guinness (formerly Sideshow Bob), Chamakh’s greasy rodent…and now Gervinho’s…I don’t know what to call that. Mop? Just shave it. Please. Anyway, as you can tell, I’ve never seen Gervinho play, so can’t comment on that. But I will say that we have every right to moan about another “typical Wenger signing” (completely unproven in a top league, let alone the English Premier League).… Read more »

Mungo
Reply to  John B.

No guarantee that Gervinho will make it in the Premier League, but he’s quality. He’s a wide-forward like Walcott, not quite as fast but has a lot more skill. Will run at defenders all day and create opportunities. He and RVP could strike up a good partnership.

Is it just me that thinks buying Gervinho will just add another Walcott to the squad. Not too impressed to be honest. I’d much rather his team mate Hazard, he looks to have far more tricks up his sleeve.

[…] It remains to be seen which of his proposed English suitors makes the first move with the player’s agent keeping his cards close to his chest when talking to Arseblog News yesterday. […]