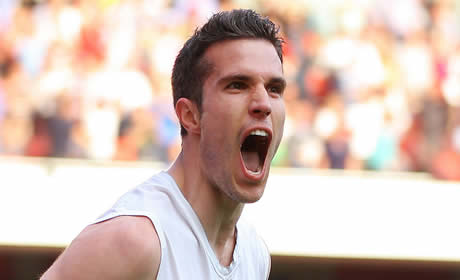 Arsenal have confirmed that Robin van Persie will be the new club captain in the wake of Cesc’s departure.

Arsene Wenger told the matchday programme, “Robin van Persie will be captain this season. He is a leader through the way he plays, through his attitude and through his desire to win.

“He’s been at the Club a long time and he’s a technical leader as well. Thomas Vermaelen will assist him, it’s the decision I have made and I’m confident the group will respond to it”.

Robin is the obvious choice but fans will be hoping Arsene Wenger can get help with his ‘Make man captain, sell man’ addiction before it’s too damn late.

The curse of the captains armband hopefully left with cesc…. 🙂

Happy with that. Fortunately Arsene did not go for Rosicky.

It’s a shame Eboue left !! Otherwise he would odds on to be captain

Didnt we do that before Henri left 😉

Only joking its a great choice and RVP does play his heart out for the team !!!!

Great Choice, he and Thomas will be great leaders.

Other news, on Arsenal website it shows Joel Cambell as one of our strikers? It says he was signed in August and even quotes Wenger as saying “Joel Campbell has already shown that he is a player with great ability, and has also performed well on the international stage at a young age.”
Why is this not reportwed anywhere?

Why did they not announce it ?

RVP the obvious choice and he deserves it! Keep banging them goals with that sweet chocolate leg mate! True gunner right there!

As for vice captain, who can doubt the abilities of Verminator, He will lead the team to victory tonite! COYG!!

Nasri is a CUNT!

I feel the PS “Nasri is a cunt “is spreading well done !!!

lol at the last paragraph.

John B.
Reply to  hedfrey

But if you think about, Vermaelen’s only played one season for Arsenal. He’s still got more work to do, in my opinion, before he can take the armband, which he will more often than not this season if Van Persie’s injury record holds to form.

As much as I like RVP, he has one year left on his contract. Why make him Captain when he may not be here next year?

He has 2 years left on his contract

Sorry – my mistake. I guess what I meant was that next year, he could either run his contract down or be sold.

Earl of Cunt-erbury
Reply to  Begeegs

Because he has Arsenal DNA -this entitles him to be the captain even if he has one day on his contract-, and he is not a cunt or shown any cuntery behaviors. RVP our Captain!!

From what you hear of him tearing Diaby a new one, at HT at Blackpool last year, definitely the man for the job.

That’s definitely RVP out the door then.

I think someone needs to go and give fish face Nasri a good slap tonight, might even do it myself. Who do the hell does he think he is? The man doesn’t know what repect is the way he’s carried on at our club like a spoilt brat. The man’s been AWOL for most of his career at Arsenal.

Joel Campbell was announced on the website, it’s been kept on a down low due to work permit I think! Glad RVP is our new captain and verminator backing him up. Am a bit nervous about tonight but will be standing by the team. Hope the boo boys stay away because the team needs us behind them more than ever! Come on u gunners!!!

The so called boo boys you refer too only boo after the game so it does not affect the players. Rather them than the plebs who stand there silently putting up with being shafted by Kronke, Gazidis & Wenger as they grow richer on our money.

Yes I’m sure they just laugh it off and hope it won’t happen next time! Why make our players nervous or want to leave the club, ridiculous.

It makes sense. He’ll be a better captain than Fab. Don’t remember Cesc ever giving a player a bollocking at half-time.

In other matters, does anyone know this guy?

now lads, i think that rob is due a good run with injuries, as long as he doesnt play in many freindlies for holland we mat get lucky, but for me the vice captain in thomas is more sensible and the main reason arsene has named thomas vice captain is because he wants to name thomas as skipper but he doesnt want to upset the apple cart as far as robin is concerned…… ive allways believed that the skipper should be a defender as they get the best view of the pitch and can controll from there…….i think making rob… Read more »

Now is the time to see the depth of our squad. All this Cesc, money, lack of transfers, AKB etc etc has been the talk of the summer – Fuck all of it and let’s get down to some football.

The boys got rid of their nerves on Saturday with a point away and hopefully realise that if they lose tonight it would be a clusterfuck of a result.

oh, i almost forgot…Nasri is a CUNT!!

and RVP is a damn fine choice!

Ive always loved RVP because he clearly loves arsenal. And when did Joel Campbell sneak into the squad, that was kept pretty quiet.

Nasri is completely replaceable, especially with 25mil or whatever it is. Hes also reminding me of Adebayor right now…. a cunt

I’m only afraid that Wenger makes people captain in an attempt to keep them at the club, Fabregas was a pretty transparent choice. I hope that RVP does not follow in Fab’s footsteps -he DID congratulate Fab!!! (that whole thing is a tempest in a tea pot, all the players knew Fab wanted to go to Barca, he got his wish, so congratulate him, I would. Thin-skinned Arsenal fans)

Anyway, I wish Arsenal had someone like Terry or Gerrard whose loyalty and commitment is never a question.

Also, Nasri is a cunt

We do have that someone… Jack Wilshere

Is it a good thing that he is “approaching his peak”? Soon he will get worse

Ya but once Van Persie is to old (around 32) and off his peak then we could either sell him or most likely keep him as a squad player and give captaincy to a 23-24 year old Wilshere who we know has the ability to be a kick-ass captain.

I’d like to think that RvP won’t leave us, at least during his prime – gooner through sbd through – he’s the sort of guy who would bleed red.

Ps nasri is a cunt

RvP is a true Gunner, through and through…we need more like him on our team!

I can understand how annoying their “Congrats” can sound to native speakers of English, but could it actually mean “we’ll miss you although we’re happy for you as your mates” or in that line?

Jack and Szchesney for captain and deputy!

too many americanisms on here.

Good for him. Now lets see if he can do better than fab as captain by lifting a trophy

I wish him all the best as captain, hopefully he will lift a trophy or two for us this season. GO RVP!

[…] Robin van Persie has been appointed the new captain of the club, with Thomas Vermaelen ‘helping’ him. A good decision for me, even if […]

R v p as captain great choice,hopefully he will stay fit for the season easy 30 goals come on the robin

It’s a great choice if he were a defender. Doyou get me?