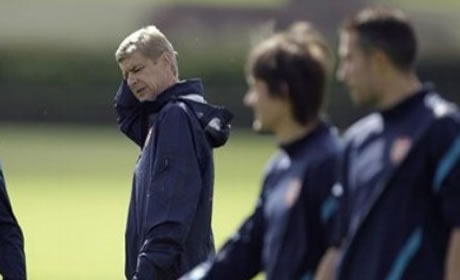 Arsene Wenger is looking for a clean sheet tonight against Udinese but has reminded fans that the game won’t be over tonight, regardless of what happens.

Speaking to the official site, Wenger said, “We will try to give our best to win the game without conceding goal. We want to qualify after two legs but if we can do it earlier, we will do it.

“I expect a game of 180 minutes where we will have to be at the top for as long as we can. We should not dream that after 90 minutes it will be over. I don’t think that would be the right approach.”

Midfielder Aaron Ramsey concurs, saying “Hopefully we can keep a clean sheet and score a couple of goals ourselves – that would be the ideal situation. But it will be a tough game and hopefully our quality will come through.”

Meanwhile, Udinese goalkeeper, Samir Handanovic (linked with The Gunners during the summer), won’t be underestimating Arsenal despite the loss and absence of key players from tonight’s fixture. Cesc Fabregas has gone to Barcelona, Samir Nasri is cash-sick and suspended, van Persie also suspended, while Jack Wilshere is injured.

“The Gunners are dangerous even with absences or blows in their squad”, he said. “They are one of the big clubs in Europe and that is not by luckIt would be a big mistake for us to believe that the English have reduced power by their absences.

“We go to the match for the fight.”

Get Samir some dollar bills stat

Van Persie suspended for not hearing the whistle! Funny shit.

Andrew, I’m really struggling to see what the plan is this season. We’ve (again) gone from promises of strengthening to yet more faffing about and more prospects coming in. I really thought that the loss of Fabregas would prompt some activity but I’m very doubtful. I did read somewhere that all the money from the Cesc transfer would be reinvested in new players but now Arsene only talks about being careful with the money. I Vacillate between all this being down to managerial stubborness and it being down to the board and the desire for profits. I suppose that it… Read more »

You know what, maybe without Wenger there the team might perform better hahahah. Just joking!

Bendtner will play tonight – a player no one wants to buy. Maybe he’ll make an effort tonight to attract a potential buyer?

But still for me he’s better then chamakh who in january can play in ACN. We know what’s Robin’s problem so if we sell Bendtner I hope we replace him or we’re lucky come january.

I think the time for moaning is over as Arsenal fully understand we are all upset they know where the problems. But as fans we have to get behind this team, we have to raise the roof and make sure we get off to a good start. If Arsene does not go and buy new players then so be it and it will be the biggest mistake he could make and the last season he would ever manage Arsenal but we must support the team. PS Nasri is a horse faced lesbian cunt and should leave Arsenal ASAP to rot… Read more »

agree. time to drop the moaning and get behind the team. everyone knows the issues now, are well versed. now. like the players, its time for US to focus and drive the team.

If arsene really is going to buy jadson, then i’d rather nasri stay, as we are not buying mata. of course that means he would have to be convinced to sign a new contract. although that really seems unlikely now.

unbelievable our luck. liverpool and united around a couple of tough champions league qualifiers after our terrible summer. it really only could happen to us.

Baron Von Rectum (sounds so good),
I have to agree with you Jadson is only in the running because he is cheap and thats pisses me off. Mata would be great a real start but why not give Andre “Pudsy Bear” Arseshaven a chance in the middle for tonight.

Also do we know when the stadium is going to be paid off ?

“unbelievable our luck. liverpool and united around a couple of tough champions league qualifiers after our terrible summer. it really only could happen to us” Fixtures are announced in July and as we choked our way through April and May we’ve known for sometime we’d have a tough UCL quailfier. We’ve also known for some time Cesc would go, Nasri/RVP were suspended and NB52 was on his way – If we got our fingers out and acted like a big club and made our signings promptly we’d be facing a Utd team with an inexperienced keeper and a Liverpool team… Read more »

Brian – what a fan you are man: “when we fail to beat Udinese”…….pussy

Two quick questions: so is Rosicky fit or not? And is Ryo eligible ? Ta!

Ryo isn’t in the squad, his paperwork is being finalised but he should be available for Liverpool.

I think alot offans will use this game to voice their frustration at the lack of signings rather than support the team. I can understand this to a degree but it could mean we exit the champs league, which I suppose some fans will want sobthey can say I told you so.

Lord Teddy, agreed Nasri is a cunt. No point in keeping him now, fans will crucify him.

I think we might see some movement in the transfer market after this game if we get a positive result. Potential transfers are surely waiting to see if we get into the Champions league proper this year. If it’s a draw or we lose then any transfers coming in could be done after the second leg if we qualify, which would give us 1 week to sort things out.
Not an ideal situation by any means but that’s what you have to expect if you have to play in the Champions League qualifying game.

will be there tonight, hoping theres no pantomine booing from the arsenal fans, about time we supported the team in such an important game

Hear hear, COME ON YOU GUNNERS!

Agreed everyone should get behind the team tonight and not waste time on that cunt Nasri.

those are words sent a cold shiver up my spine, especially with Squillaci on the bench

I think someone needs to go and give fish face Nasri a good slap tonight, might even do it myself. Who do the hell does he think he is? The man doesn’t know what repect is the way he’s carried on at our club like a spoilt brat. The man’s been AWOL for most of his career at Arsenal.

With the team we have at the mo Were only entering the champ league for the money coz with the team we got there is no way on he’ll we can win it with this team… I hope I’m wrong tho… Pls buy defensive mid, left back, Att mid and striker about 60 mill to spend.
And history tells that ain’t gonna happen-

Eie, not sure why you’re getting the hump and giving someone your seat number just because he’s fed up with moaning arsenal fans?! For me it’s old and new, doesn’t make it right.

cash-sick. hehehe…
I think it’s okay for arsene to keep a tight fiscal ship. sure new players would be great, but I’d rather ensure our future than blow it on big names.

Not much of a future to be left if Arsenal continues its spiral downwards.