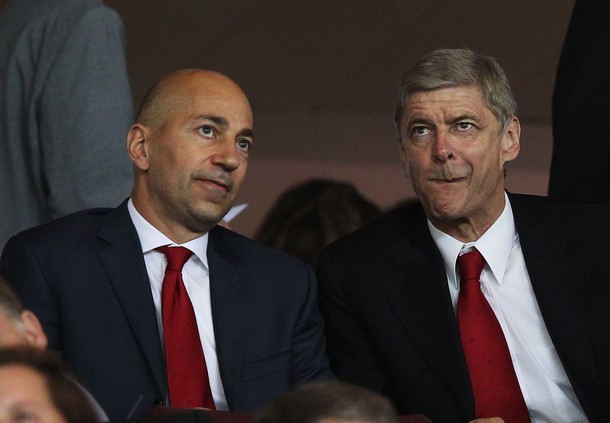 Arsenal’s Chief Executive Officer, Ivan Gazidis has stressed his belief that UEFA will attempt to properly implement and police adherence to their financial fair play regulations despite suggestions that certain clubs are already planning to take advantage of loop holes to maximise the financial muscle of their cash rich owners.

The new rules and regulations are being phased in by European football’s governing body after alarm was raised at the huge debts accumulated by the continent’s biggest sides. As things stand only 20% of UEFA registered clubs turn a profit (Arsenal counted among them), a state of affairs which Michel Platini is determined to rectify by enforcing more sustainable business models.

The rules, designed to ensure clubs live within their means over a rolling three-year period, do not come into full effect until the 2013/14 season, although the current campaign is the first that counts towards an initial assessment by UEFA’s Financial Fair Play panel.

Speaking to Sky Sports: “Special Report – Billionaires’ Club”, Ivan Gazidis spoke optimistically about the new measures and why he thinks, despite likely problems, they will benefit the majority of clubs in the future.

“There are exceptions, there are exemptions and there is a certain amount of discretion that will be in UEFA’s hands. I’m pretty convinced that Michel Platini is committed to this path, but we’ll have to wait and see. I’m inclined to rely less on UEFA for these things and more on the general sentiment of the clubs themselves.

“I don’t think it’s reasonable to think that they [the regulations] are going to come out of the box perfect. I think this will always be a work in progress and we’ll learn as we go along. They’ll be some unintended consequences and we’ll adjust as we go.

“UEFA will need to recognise that as well and I hope that they do. I do thing they are serious about trying to enforce these rules. I think people in the game want them to enforce them clearly and transparently.

“I also think that the reason the clubs generally, with varying levels of scepticism about how UEFA will do it, are in favour of financial fair play is that there are more winners than losers. In that kind of environment more clubs will benefit than will lose.”

Taking umbrage with the naming of the regulations, and hinting that morality and business are uneasy bedfellows, Gazidis continued:

“We talk about financial fair play – I don’t like that term because it dresses this up like some kind of moral judgment; as if there is a right way and an unfair way. Actually there are just different systems, different ways of doing things. None of them are morally better than any other.

“The question for the game is how do we want to develop the game? Where do we want to see it in five and ten years from now? I think, and I believe most clubs agree, that they want more stability so that clubs can invest in their long-term future rather than this spiral of simply spending on players without real investment in the infrastructure and the relationship we have with the fans.”

Asked whether a European ‘Super League’ was a likely possibility if the Premier League’s financial health was damaged in the coming decade, Gazidis denied any suggestion that England’s top flight could not stand the rigours of the current financial climate.

“That appeals to people all around the world. I think the future of the Premier League is very bright, I don’t share any sense of pessimism about it.”

It remains to be seen whether Arsenal will benefit from FFP or indeed whether clubs like Manchester City, Chelsea and newly-rich French side Paris Saint Germain will have their extravagant spending curbed. However, when you see how City in particular have already sealed themselves a substantial £400 million ten-year sponsorship deal with Eithad Airways and look unlikely to have its legitimacy challenged, you have to question whether the whole plan is flawed.

Would be nice but a Wayne’s world quote springs to mind. “Yeh right… And monkeys might fly out of my butt.”

It just ain’t going to happen and we could be one of the only clubs that adhere to it, giving the board the excuse to not spend the money needed to move forward. Only our board cannot see how this is going to go or they don’t want to see it. city and others will get shirt sponsors for 100’s of millions from there owners and f all will be done about it. It’s all good being the moral guardians of all things right but we need to wise up or will be left way way behind. We need to… Read more »

Ivan really is a bore isn’t he? All this preaching is simply embarrassing. To think that this will really work and clubs like City will adhere to this and wont find ways round it smacks of utter delusion as well as outright stupidity.

FFP is a waste of time and the way Ivan keeps going on about it sounds a good excuse for not to spend money and compete!!!!!.

Update on the Le Cunt at Man C, they are as good as out of the UCL, they will be playing with the Spuds and Stoke on Thursday night. On the bright side, he will have more playing minutes as Super James Milner normally rested for the Carling and Europa cup.

Nasri even looks a cunt now too. (Post champions league)

Somehow, Ivan Gazidis participating in what he believes to be a good system to regulate the future of football while not being excessively involved in its administration or anything quite internal is regarded to be an act of ‘laziness’ that signifies his failure as a chief player in the Arsenal staff.

Bravo, all of you, BRAVO.

(of course, not every one of you)

Participating in *a discussion/debate of a system that he believes…

The simple undeniable truth is is that ‘Cash is King’ and unfortunately I’m not talking about Johnny.

As great a sentiment as the ffp is the reality we’re faced with is that the likes of Barcelona, Real, both Milan teams and to some extent PSG will never be barred from entering the Champions League (a punishment mentioned by UEFA for not adhering to said law).

The corporate sponsors have far too much of a voice now in football to allow this to happen. Its the very same reason why Sepp Blatter is still in a job.