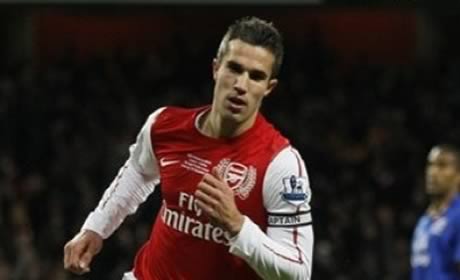 The skipper has reacted to the defeats by Milan and Sunderland, putting Arsenal out of the FA Cup and with a mountain to climb in the Champions League.

Speaking to the Sunday Sun, van Persie said, “We owe it to our manager and — even more — to our fans. It hurts that Arsene Wenger has had to suffer the criticism he has. It’s a collective sport and there are many reasons why we have not produced the results.

“The last couple of games have just not been good enough. And I personally feel responsible for this as the captain of the team.”

Which is great to hear but, while not wishing apportion blame, Robin references the fact this is a collective sport and as such everyone has had their part to play. However, if this has him up the team before today’s game then it’s hard to see any problem with it.

Having started the season badly, Arsenal are currently scrapping for a top four finish and currently lie 10 points behind the outright cunts. Robin believes the form we showed from September to December can be replicated though.

“I honestly believe this team has quality and can finish strong. We have come back so strongly after a disappointing start. Believe me, that took massive strength of character.

“That needed a real belief that we could fight back and be up there for the final run-in… and we are.

“Now we need to do exactly the same again. I am sure we can.”

Taking three points today would be a massive start and let’s hope this is a case of words being backed up by actions. Robin needs his teammates to back him up in their performances on the pitch today.

Meanwhile, despite everybody knowing his contract talks are on hold until the summer, he has reiterated his stance, saying, “There have been a lot of stories, generally contradictory ones, about my contract situation recently so I’d like to make it clear,” he said.

“There’s nothing complicated or sinister – the club and I have both agreed to speak at the end of the season and see how things stand. The boss, Ivan Gazidis and I are all comfortable with it.

“I need all my focus to be on football – on captaining this team, improving every day, doing extra work on the training pitch and preparing for the very busy schedule of fixtures we have.”

Nothing new, nothing to get alarmed about, and fingers crossed the skipper is personally responsible for cunting those cunts right in their cunts this afternoon.

How long has it been since we’ve heard a captain of ours talk about personal responsibility like that? Nice one Robin.

but I guess its to be expected of a club that cheated the riot hit area of tottenham of 16m quid for their own benefit. They can finish above us this season but they won’t win the league, it will be a position where we fans have bitched about for the past 7 years because we haven’t gone on to win, for spurs finishing above arsenal is a trophy.

Why’s he feel responsible? i know he’s the captain but he’s one of the few fuckers that put the effort in this season!

I am planning to switch my daily breakfast routine and watch the match with wine and pork chops,will that ensure viheh tory ,we shall see.

I hate the scum . But I will tell you this for nothing….in the long run,if they were to smash us,which on currant form. Is not beyond the realms of possibility. It could be a blessing in disguise. I’ve been going to Arsenal since I was 10. I’m now 43 and I have never been so sick of the sight of so many Arsenal players. Instead of listing them. It’s easier to say who should be allowed to wear the shirt and there’s not many. Sczczczy,Verm,Kos,Sagna,Wiltshire,Ox and RVP. The rest I couldn’t give a monkeys about. And if Walcott was to get a new improved contract that’s me and Arsenal done.

So, you don’t care about Mertesacker? You think Andre Santos is crap? Are you prepared to write off Aaron Ramsey at 21, when he is the captain of Wales? You would rather have Bale, wouldn’t you?

I think you and Arsenal are pretty much “done” considering you would rather they get a thrashing from a cock standing on a ball, and not renew the contract of a player, a little more than a year ago, was called the most dangerous football to face by Messi? Granted that he has gone sideways (poor choice of words, I know) in his career, you wouldn’t even offer him a raise?

I am increasing meeting people who seem to find the need to substantiate their faith in the club with speculation of how long they have been “going to the Arsenal”. Why come post on an online blog then? Is it because no-one listens to you in the “stands”? Or do all your friend avoid talking to you about Arsenal because you sound bitter?

Let me put it another way. In case you ever decide you and Arsenal are “done”, Andrey Arshavin will be missed more than you. Regards.

Rick
Click to flag and open «Comment Reporting» form. You can choose reporting category and send message to website administrator. Admins may or may not choose to remove the comment or block the author. And please don't worry, your report will be anonymous.

None of us are happy but you don`t finish with your club…you love your club, even if sometimes it feels like your club doesn`t love you back! Live and die…always the Arsenal!

I understand why he wants to wait until the summer to look at his contract, but this idea there is ‘no time’ to talk about it now is disingeneuous stuff. We know why he doesn’t want to talk about it now, because he won’t want to stay at a club that isn’t in the CL and isn’t going to invest, if that turns out to be the case, so leave off the stuff about ‘busy schedules’ etc.

So, you would rather he comes out and tells the English press that he is completely free, but will wait for the summer to decide if he wants to leave or not?

Give the guy some credit, even if you are right, he is at least saying the right things. If those aren’t the right things to say, then surely you hated Henry and Vieira too when they played for us, right?

It astounds me how he feels he is to blame because he has not scored the last few games, his record this season is up there with Messi and Ronaldo’s we can’t expect him to score every match.
The real fault here lies in players like Theo,Ramsey and a few others yet RVP is the only one to openly admit he’s to blame.

I fully agree, when RvP doesn’t have the best of games someone else should be stepping up and putting the ball in the back of the net, unfortunately there aren’t enough sources of goals for us atm so here’s hoping he pulls off some magic for us today. Come on you fucking gooners!!!

Im pretty sure his calendar year record for assist and goals per game was a lot better than Ronaldo’s or Messi’s.

This will just make it hurt even more when he leaves in the summer!
Sorry for being so pessimistic!

Van Persie is personally responsible for keeping us within reach of a top-four place. Without him we would have been nowhere.

Apart from the three points, the best thing about beating the Scum will be that it will surely end any hopes that they have of winning the Premier League.

Come on you Reds!

fatgooner-those inbred cunts from middlesex were NEVER going to win the league…the clue’s in the name-
P-R-E-M-I-E-R L-E-A-G-U-E….
apologies for spelling it out like that but we’ve had a lotta lotta spud trolls on here recently & I wanted to make it clear for the little loves…