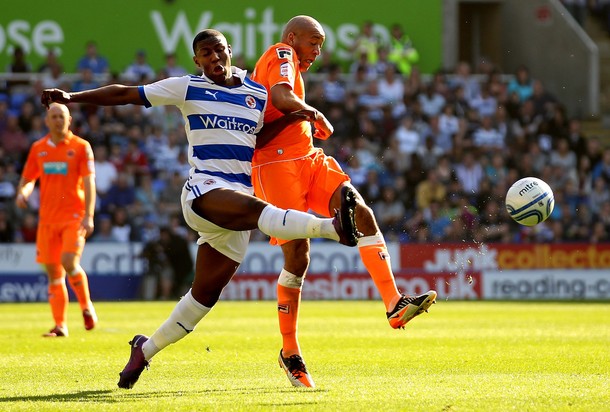 Benik Afobe is open to the idea of another loan spell away from the Emirates but insists his long-term aim is to break into the Arsenal starting line-up.

The England under-19 international, who has been included in Arsene Wenger’s squad for the tour of Asia, is tipped for a bright future in N5 but readily accepts that his development will be best aided with regular first team football.

The teenager was impressive during a spell with Huddersfield in 2011, but was ruled out for seventh months with injury last term before ending the season helping Reading the Championship title.

“If the gaffer wants me to go out on loan for six months, or even the whole season, then I would relish that opportunity because playing for Reading last year was very beneficial for me,” Afobe told Sky Sports.

“However, my main aim has always been, and will always be, playing for Arsenal.

“It was a great experience for me to join a side pushing for promotion to the Premier League and all the boys and coaching staff there were really nice.

“They made it really easy for me to blend in and get back playing football again, so it was a great spell for me overall.”

Resoundingly praised by Robin van Persie for his attitude in training after returning from injury, Afobe admitted that it was tough spending so long on the sidelines.

“Being out for six to seven months is always going to be hard for any player, but especially for a player that is still trying to break through into the first team.

“The season finished really well for me though and hopefully this year will be an injury-free one for me.”

A season on-loan with a Premier League club could well be the ticket for Afobe. While a spell in League Two and stint in the Championship is all well and good, the striker needs to prove he can handle the pressure of life in the fast lane if he’s to persuade Arsene Wenger to take him seriously.

He helps Read the Championship title

Anyone have thoughts on his playing style? I have no got to see much of him. His attitude seems to be right where we want it though, and at this point that is a good sign to me

What did Batman say to Robin before
they got in the Batmobile? Robin, get in
the Batmobile.

I would have gone for something funnier but I prefer to be straight forward.
Either you get in the bat mobile or you don’t!!.
Robin, either you sign or you fuck off!!!.

top bloke why dont others take his approach

Who hasn’t taken this approach?

Good attitude from the lad quite refreshing to hear these days.a lot of the youngsters wont make it but it seems afobe and henderson are pushing for 1st team action this season,so with those plus the ox,miachyi,wilshire etc things wont be so bad me thinks!

‘Helping Reading win the Championship title’ is pushing it a bit for a couple of appearances, one I think off the bench. Reading fans said they expected to see more of him once the title was safe but I don’t think he featured at all in their last games. It’s a real problem finding the right club for these loan deals. We think the little poor clubs should be over the moon to get our kids for a season but in reality the last thing their managers want is a 16-year-old Iniesta look-alike who fancies spending 90 minutes of a… Read more »

Coyle used Ryo as much as his injury would permit. In fact, I think it says something huge indeed about Ryo that he was pressuring Coyle to play him even though he knew he wasn’t fully fit.

Hope he has an excellent pre-season and earns a place in our first team squad.

I think it would be better for him to go on loan for 6 months at least. At this stage in his development what he needs is the experience of playing a proper long league campaign in a team that needs him. Once he has that experience, he’ll be ready – mentally – to step up for the Arsenal. Don’t you think?

No, I don’t think that. Far too often we see decent young players get loaned out and then get very few games, so their loan spell proves to be a waste of time. I’d rather he was at Arsenal getting blooded in the first team with Carling and FA Cup appearances and the odd 10 minutes at the end of Premiership games. Far better to have Arsenal control his development. Another benefit is that if we have injuries, then he is available to play, but if he’s on loan he won’t get those opportunities to make a breakthrough.

Agree with Argonaut in that till christmass the carling cup and reserve teams offer football playing in our style for a decent period. Post Xmas taking the gamble on a loan for the rest of the season works well.

This kid has the right attitude and a good head on his shoulders.

I’d like to see him get a few minutes in the Carling Cup (or whatever it’s called now) before going out on loan but perhaps a full season on loan would be better.

i prefer him to stay and get chances here and there for us. wenger has to start being brave and actually giving opportunitys to youth rather than throwing them in when the stars leave. he didnt have a great time at reading but he was only there for 8 games and it was expected that scans would reveal longterm injurys to a couple of their attackers which turned out to be minor knocks so he was prepared to push them onwards if needed. i dont think puttin players on loan helps them at all. they look useless playing a complete… Read more »

Totally agree. The only way he’ll make the step up is by having him ready at Arsenal to take his chance when it inevitably comes. Arsenal players do have a habit of picking up injuries, so opportunities for games will arise.

agree with argonaut…he can go out on loan at almost anytime in the season. He had a good showing in the U-19’s in the summer, if he has a good pre- season hold on to him and see what transpires.