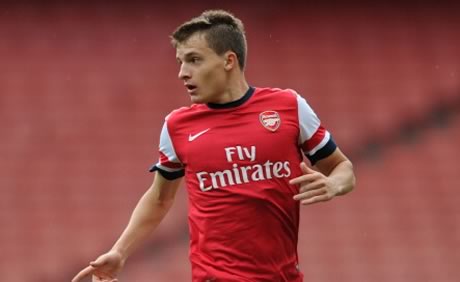 Thomas Eisfeld signed from Dortmund last season at a time when people were hoping the club would make something of a splash in the January transfer window.

The young German may not have been the star people wanted but he’s making progress, outlined by his presence on the pre-season tour of Asia during which he scored twice. And Eisfeld says it’s something that has always been part of his game.

“I’ve always scored a lot of goals and made a lot of assists,” he told this month’s edition of the Arsenal Magazine. “I think that’s important in my position to be able to do that.

“My favourite position is the number 10 role, so attacking midfeld. I don’t mind the wings either. Since I’ve been at Arsenal I’ve learned how to play the ball quicker and pass and move with more effectiveness.

“Pre-season was really nice and gave me a real confidence boost. I’m really happy with how it went.”

While Dortmund, as a club, have a very healthy focus on young players, Eisfeld says he couldn’t ignore the lure of Arsenal.

“The chance was there to progress at Dortmund,” he said, “but I moved to Arsenal because it was my dream. Arsene Wenger is a manager who gives youth a chance and helps them to develop their game.

“I believe I can progress to the top faster here.”

Thomas may have a chance in the Capital One Cup tomorrow, although with the number of first team players who need an outing he may have to settle for a place on the bench.

His eye for goal might just keep him to the forefront of the manager’s mind, giving him another opportunity to show he’s as cool as Eis.

“Eis-cool finish by eisfeld there…….” Vs coventry.

And ofcourse in other news, international football has told eis-hole terry to fuck right off.

Hopefully, he will pick up the baton when Santi Cazorla is past his prime

But in all seriousness, if there was one reserve player who you’d put on money on breaking through. Him, Gnabry & Yennaris would probably be the three

If there’s one person I hate, John Terry, Joey Barton and Ryan Shawcross are the three

Oh yeah, and that other one: Manchester City and Liverpool…

Let’s hope he doesn’t turn out to be an Eis Hole like Na$ri.

kiss my arsenal
Reply to  SR

we wouldn’t have room for him with our current crop of midfielders!

Eis Eis Baby! One for the future for sure, would be nice to see him an Jack together…

Gotze has been disappointing this season. Very excited about our midfielders, both current and future future.

We’ve got Santi and Eisfeld. I’d rather have Marco Reus than Gotze if we’re gonna bring in more young German talent. Especially if Theo leaves us.

If he comes on tomorrow, I’m expecting to see “the eis man cometh” on thr liveblog.

SR… that one person would only become three if shawcross, had gone through him with one of his trademark tackles

Talking of Shawcross, on other cunt related issues, I hade to laugh at tony Pullis comments about diving. Didn’t Pennants legs give way at the faintest of touches by Gibbs a couple of weeks ago? Then he continues to purvey this myth that its a foreign disease. Young , wellbeck, Gerrard, Rooney, Adam Johnson and primarily (or should that be primately) monkey boy Bale have all actively dived recently. And isn’t this the same manager who 7 days previous laughed off Crouches deliberate handball/goal. Hypocritical twat!

I think you have to give him credit there. Diving ruin people’s careers. This sort of diving makes for terrible football, it’s against the rules and it endangers people’s safety. Oh, wait. Diving?

All hail are german contingent! Might even help to attract future german youngsters hehehe

The Germans are coming!!!

I dun even hate the united fans as much as i hate stoke fans from shittania. Absolute fucking cunts.

Well Rosicky is his hero hope to seem him place tommorow but i can garantee two positions in the midfield have already been taken by Fringpong’ and francis C. . So let him Gnbary and Arshavin fight for the last spot in the mid

Frimmers and Coq. Jheez the poor Coventry midfielders are going to get a kicking.

Is the FrimStar fit to play now?

Don’t forget to support the ladies tomorrow when they face Barcelona in their CL clash.

And ofcourse the men when we play coventry.

Are barca women cunts like their male counterparts?. Yes they do have cunts but are they cunts?

I rmb when last year everyone was clamoring for Mario Gotze, and one morning all the papers were reporting that we’d signed a kid from Dortmund. With great anticipation I looked, only to read the name of some unknown teenage kid from their reserves.

EIS TO SEE YOU

Let us not get too ahead of ourselves now.

Don’t think he’ll play Aaron, I can see Arsha playing through the middle like he did last year in the then Carling Cup against Bolton. The game in which Park scored his solitary goal for the club.

I can’t see him playing Ramsey. So there’s a small possibility he’ll include either Arshavin (out of sympathy) or even Alex Oxlade-Chamberlain, who hasn’t had any playing time since Southampton. The other possibilities would be Eastmond if he’s fit, or Kyle Ebecilio.

Chamakh and Squillaci might make the bench. Though the idea of Giroud, Arshavin, Chamakh, and Squillaci all on the pitch at the same time is pretty hilarious.

Kn-
Ows. All this coming up with line up prior is all but fantasy. I came up with what I thought was a peefect line up for montpellier and they would have all been whitewashed!!. So I’ll leave that to le prof.

Hoping him, Gnabry and Chuba Akpom get a chance tomorrow.

[…] Eisfeld, signed from Borussia Dortmund this year, is also one who could make a start. He was impressive during pre-season. The midfielder, who plays in an attacking position, has had […]