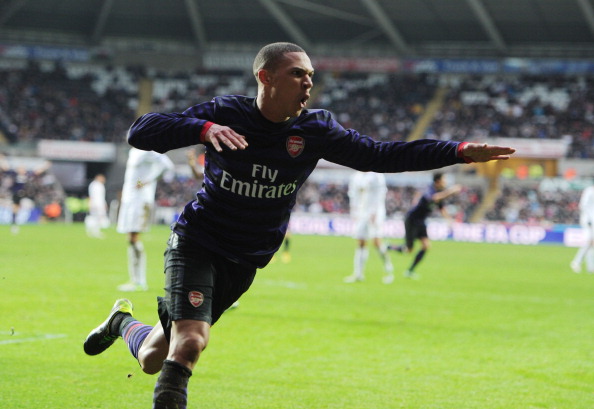 Arsene Wenger has hailed Kieran Gibbs after the England international made his 100th appearance for the Gunners in Saturday’s 4-1 win over Reading.

Claiming the 23-year-old is now amongst the top three left backs in the country, the boss highlighted the Academy product’s progression this season highlighting a ‘step up’ in performance despite the fact he’s been in around the first team since 2008/09.

Facing the press after Gibbs’ landmark appearance, made as sub for Nacho Monreal, Wenger talked in glowing terms of the player’s increasing authority on the pitch.

“I think this season has been, despite the fact that he was in doubt for a while, a step up season for him. He has improved a lot, has put his personality into the games, which was sometimes a bit of a problem for him.

“He has authority, he is decisive going forward, and in games where we were struggling a bit like Swansea in the cup he turned up and was the one who brought the pressure on the opponent.

“Even at Munich when he had been out for six weeks he came straight back in and had a very decent game. For me he has moved into the top three left backs in the country.”

Given his history of injuries and the acquisition of Spanish international Monreal questions were raised in January about Gibbs’ future as the club’s number one left-back.

While he certainly has a battle on his hands, even if the ‘threat’ of Andre Santos has been overcome, Wenger stressed that Gibbs is ready to fight for his place.

“He is ready for the fight,” Wenger continued. “I did it [buy Monreal] because I believe you never know with only one left back. You need two. And as well because both can play one in front of the other, so there’s an opportunity to use them both in some games.”

Arseblog News tips a cap in the direction of Gibbs [a Dubai-stationed yacht’s captain’s hat since you ask] in recognition of his centurion status and wishes him well for the rest of the season. If Monreal’s bruised hip keeps him out this weekend he’ll return to the first team at West Brom on Saturday; the location of THAT block which last season sealed Champions League football.

I’m just gonna go out on a limb and post a video here too, because I’m that happy watching this one

Lettraggad
Reply to  Loop A Hole

I do feel sorry for Reading! A team that tries to play football, is run sustainably, but ultimately gets spanked by us every match. If I had the choice I would relegate QPR, Stoke and Sunderland (and keep Spurs in 17th just for the lols). Especially QPR. Idiot owner.

cestriangooner
Reply to  Loop A Hole

We did play some fantastic stuff. Seeing it makes me wish we utilised rosicky more earlier on this year. Great to see rambo’s performances pick up too hopefully he can be key in this final push for the champions league and prove his doubters wrong.

Also i love the bit at the start of the video with mikel talking to/advising rambo, he’s a good leader and come summer should really be made captain i think.

He should have been made captain this year, I think most of us can agree on that if only with the benefit of hindsight. Couple of problems for me with doing it this year, the obvious one being what the hell do we do with Vermaelen? I don’t think he should be sold, we’re hardly rolling in surplus center backs these days, at least not ones with any ability at all – but what will stripping him of the captaincy do to his confidence? Other issue is that Arteta is going to be 32 next season I think, and quite… Read more »

Agreed i think the only reason arteta wasn’t made captain was because he had only one season at the club and vermaelen was already vice-captain, although i suppose that hasn’t stopped wenger before (gallas and gilberto). To be honest i think the captaincy has been a hindrance to vermaelen’s form, but regardless of that the team comes first and we just seem to be a better team without him in at this moment in time. Also didn’t utd do something similar with ferdinand and evra (or vidic can’t remember) when ferdinand had a load of injuries. (i may have imagined… Read more »

Didn’t realise quite how good the build up for Cazorla’s goal was. Lovely.

mr blogs i must confess i plagourized you today on nasri post in give me football, apologies

The Car2n Goon
Reply to  arseblog

Pooner
Reply to  Loop A Hole

Hypnotic! Loving Rosicky and Ramsey’s return to form, Arteta and Cazorla looking fresher too. Let’s hope we can ping it round like this every week now!

Its almost like looking at a team of walcotts running around, exept that they have ball control haha

Rambo
Reply to  Loop A Hole

Didn’t know that we played so fast. How to teams even keep up with us. It looked like 11 Walcotts out there with crisp quick passing. Unbelievable I think if Barca were to see that they’d wet themselves.

Lec
Reply to  Loop A Hole

Watch this^^ then go touch yourself.

Does anyone know how to get a logo or pic in the reply square beside your name,cheers.

It’s in the information section. You can also use Gravatar and upload an image. You’ll link your email address and then use that email address on here (or that’s how I did it)

I Love Gibbs ..
I know there are some people who still don’t rate him but I’m with Arsene on this one.
Fast , technical and how many players can say they have made 25m£ tackles?
And last but not least he is Arsenal.

Yeah,agreed.Love how he progress, Jenkinson too.People always talking about Gibbs only being england’s 3rd choice but he’s only 23.Imagine when he’s 26.

I’m with you on this, the only real worry with him and its not an unusual one for us lot sadly, is the injury concerns. Hope very much he’s put all that behind him, next couple of seasons will be crucial I’m thinking for him in this regard.

Gibbs truly is awesome. So young still as well. Can’t wait to see him wearing the England top in front the Cashly Cuntingham.

Long may Gibbs wear the Arsenal shirt, and hopefully a carrer with minimal injury too.

Such a solid player, improving his balance of attacking and defending well, can’t wait to see both him and Nachoman step up their game to fight for the the First team spot.

i think gibbs is number two in terms of best left back in england first has to go to ashley no matter how much you hate him you have to give him deserved credit been outstanding for a decade, baines is quality but i just feel gibbs is a better defender then him and plus hes got age on his side .. gibbs can become as good as he wants really

I don’t see why this has got thumbed down, undoubtedly Cole is, in the history of every living organism, the epitome of a bellend… But he has been a hell of a player. Credit to The Arsenal for developing such a talent though.

‘Has been’ is the correct description. He was the best but is no longer the best. I mean, I haven’t even seen him in Garth Crooks team of the week for a while, so that’s how shit he’s been

That just means he hasn’t scored recently — I wonder how Crooks picks keepers?

Defending: Gibbs is certainly top-3 in England along with Ca$hley Cole and Leighton Baines. The tackle at West Brom last year was quintessential Gibbs. Scratch that, in terms of defending I’d say Gibbs is the BEST leftback in the country. Contributing to the Attack: Sorry to say, Gibbs is not even in the top-10. His final-passes/crosses/shots are almost always 1-2 yards off-the-mark. What a shame, because his ‘penetration’ can be outstanding. The volley at Swansea was the only shot on-target out of a few dozen this year. You could see the painful-frustration on Podolski’s face all the time when we’d… Read more »

I’d love to see the stats, but from memory it seems to me that we’ve been a much better, more balanced team when he’s played for us this season. That said, the alternatives have hardly been great, so not a surprise if the numbers do bear that out!

Arsene knows. Made the best left-backs in the league.

Cashley
Clichy
Gibbs
Monreal (signed at his peak, but still a keen eye to find him)

none of them as funny as this guy though
http://www.101greatgoals.com/blog/galatasarays-joker-emmanuel-eboue-trolls-a-turkish-interviewer-on-live-tv/

Or as cuddly as this gay https://encrypted-tbn0.gstatic.com/images?q=tbn:ANd9GcSb6A4EQfOuVOz3qQKbhhTjdMCkYDIl95H3iGR7vdW3gofA3y8GUw

And lets be honest, funny and cuddly are the 2 most important qualities for a full back to have.

Now we have 2 good player playing the left wing back. Let us try that in every department and the go ahead and win the league next season

At no point does Wenger say current players, so it could be Sansom/McNab, Winterburn and Gibbs

He is a very good lad…

Cracker at swansea from gibbs. Remember? Proper lad. Rosicky got about the same chance last weekend with reading and I expected a tear in the net….oh well. Love em.

Top 3 English leftbacks maybe. But it would be hard to say he’s one of the top 3 left backs in the country. Cole, Baines and Monreal (probably) are all better than him. That said, there certainly is a lack of top quality leftbacks in the league.