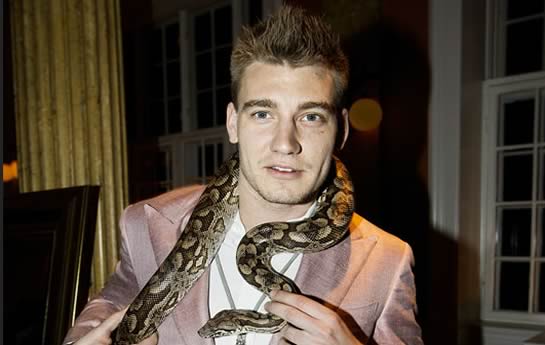 Crystal Palace and West Brom have emerged as potential destinations for Nicklas Bendtner.

We all know the story at this point. The player says he’s going to leave early in the summer. Then, for some unknown reason which surely has nothing to do with his wage demands, a series of transfers reach the point where you think it’s almost going to happen but then fails to materialise.

Now, reports have suggested that West Brom are looking at him after Nicolas Anelka told them he wants to retire, while Crystal Palace, having already successfully shopped at Arsene’s Outlet Store, fancy a go of TGSTEL too.

Bendtner’s international manager, Morten Olsson, ruled him out of a call up to his national side, saying, “He will not take part in the national side until he finds himself a new club.”

Seven days and a few hours remain of the transfer window. Bendtner likes to play chicken with the deadline, so let’s see what happens.

Morten Olsen on Bendtner: “He will not take part (of the national side red.) until he finds himself a new club”

That’s the only way this guy will move I guess.

Ever wondered if he actually plays his TGSTEL legacy will be endangered?

If he doesn’t leave, I propose Arsene demotes him to Ticket Stub Collector or Water Boy or Emirates Toilet Cleaner.

Languishing on the bench (again!)? Bah! Like any business organisation, he needs to contribute.

I would be more inclined to keeping him if he cleans up piss once in a while and keep our players hydrated.

When will his contract expire btw?

End of this season

Scored our the first goal in the first game I ever went to against Ipswich, was a peach too.

Bendtner isn’t a bad player,he is just a cunt.

A romp with the Danish Princess ruined his career.

The fact he believed his own hype ruined his career.

Same here, a 94th minute Bendnter equaliser against Villa at the Emirates was the first goal I ever saw.

Wait, how was a 94th minute equalizer the first you saw? What happened to the first goal(s)? I MUST KNOW!

Obviously it was 0-1 and Bendtner made it 1-1. First ‘Arsenal’ goal he saw, was what he probably meant to say.

Ahh Bendtner. Ever since that Barcelona miss its been downhill for him 😐

Can’t help but imagine what might have happened if he scored… At one time he did look promising… Always sad to see young footballers go astray in their careers.

Bendtner missed MILLIONS of goals and he obstructed a few more (Liverpool Champ League)
If he had taken half of his chances we would have won a some quadruples, a few triples and many doubles.
What a waste of talent!

I bet if he sticks around in the P.L he will be a thorn in our side, can you imagine him scoring the winner against us for palace? Send him abroad he’s done enough damage….how on earth he still has a million in his price tag is beyond me.

Sure yeah, him and Chamakh.

Breath. Hold. Do. Not. Not in this lifetime, or the next.

I find him contemptible. A player who looked like he was playing in wellington boots.

“I find him contemptible. A player who looked like he was playing in wellington boots.”

They must have pinched his toes. Wellington Silva is a lot smaller than Bendtner.

I thought Bendtner had retired…

He’s not going anywhere, this deal will fall through like all the others did

They don’t have the tube to Crystal Palace. He’ll have to go to Brixton and get the number 3 bus. We could have a whip round and get him an oyster card…

I’d be happy to drive him in his Aston Martin.

The ‘world best player’ is nothing but a shadow of his former self. I still doubt the possibility of Cardiff or West Brom signing him because of his outrageous weekly wages. He can rediscover his lost talents at the Red and White if Wenger keeps him.

Nick doesn’t care about the worldcup as Denmark most likely won’t qualify (our national team is quite shit). He cares about wage though!

Like I give a toss what ewe all think.
I’m the best, you’re the rest. I wear paddy power (princess) trunks, u are styupid. I smoke da herb with Snoop D.O Double G, u can’t bum a shisha off my great friend #CrystalChamakh.
I am Nic Bendtner, THE GREATEST STRIKER THAT EVER LIVED.. Ewe R Nobody.
Follow me on twitter, instagram,Facebook, CuntsByInvitation.
#Tyneside #WengersWageStructure #TGSTEL #DelPierosWaterboy #ArseblogCensors

Sent from my Blackberry Device

The only Olivier is Giroud
Reply to  @NikkyBeezy52

If laughing was a goal celebration, then I’d be doing the Arshavin vs Barcalona one right now 😉 CuntsByInvitation!

I hope that snake fucking strangles you.

Which one of them are you talking to?

Is he not in Celebrity Big Brother?

Bendtner is actually a decent striker and could possible get better with hard work, though I am not counting on it. I think he can do a decent job for a newly promoted club. 12-17 goals easily if he can drop the snack and stink attidue

I can’t see Palace or WBA affording him on loan. Maybe WBA to buy IF Anelka retires. I think the guy is just as happy riding his contract into the ground and collecting his wage. It seems he really doesn’t care anymore.
What’s that Princess think of ole Nicky B now?
“Yes dear, that’s your daddy. He’s a professional footballer.”
“But mum, all he does is sit on the chesterfield and watch X-factor, eating crisps…”
“True…..”

Bend it not like Bendtner. A new film coming out near you. Oh wait. The deal has fallen through. Even though he is like George Clooney. Hahahahha. Not. Fuck off to another club please TGSTEL.

Bend it like Bendtner. Not the football silly, thats how to get your mind twisted.

isn’t there some sort of competition bigger than the champions league he should feel like he deserves to play in?

Dancing With the Stars

UCL – UEFA Cuntery League of Greatest Strikers. Only striker play in it. Adebayor, v.Persie, Bendtner, Suarez, Tevez, Fatboy, etc. They feature Blast from the Past at times where Prat-ini and some other cunts from the past also get a run in.

I hope he will finally move now. This is a real life matter and if his trend continues, he might waste the rest of his life in a downhill matter.

On another note, have I miss Blog squad assessment on squad player (Not just department like in the main blog)? The one where last season he said Mannone was like the Mafia henchman. I know it’s super late but I thought maybe Blog waiting for the end of the transfer windows but not sure now.

Waiting until the end of the transfer window to complete our squad profiles.

Thanks for the reply Blog. Looking forward to it.

Great, but I guess you have 17 out of the 17 that will be needed ready…

He doesn’t like auditions, hence the ‘leaving it late until transfer deadline day’. The club sees the body, FIFA13 data, and maybe YouTube videos which is sufficient info to use in signing players these days.

“TGSTEL does not do trials

…unless you give him free pizza, yes?”

Palace? Would you want Chamakh and Bendtner as your two strikers, fighting to keep you in the premier league?!

Everyone say ‘yes’ in a deep authoritative voice. Eye contact. Try not to sweat.

This has been a fucking long “two weeks”

When negotiating a weekly wage with TGSTEL I advise any manager to arm himself with Bendtners Gag Reel against Burnley. It was like a ‘Youve Been Framed Nick Bendtner Special’.

The Twat That Wouldn’t Leave.

It’s a Shame he never fulfilled his talent, his record is actually good. But safe to say that he can’t really blame anyone but himself.

I can just picture Bentner playing Fifa, editing his own stats and then playing career mode, single-handedly destroying teams. He scores goals in the box, out the box, and from his own box, because he is TGSTEL. Maybe that’s why he rates himself so much. Because Fifa = Real Life, right?…right?

The least appropriate acronym there ever was.

I still can’t believe (if its actually true) that the club allowed him to change his number to 52, after he signed his £52,000 p/w contract.

I think he wanted number 7, but Rosicky had/has it, so he went for two numbers that added up to 7

Is that a real picture? I never know with this guy.

I’ve been away for a day. Is he gone yet?

No? What a shocker.

I have met Ian alot of times, we have spoken and i know for a fact he is the kind of manager who would kick the shit out of bendtner at palace if he continued in his ways