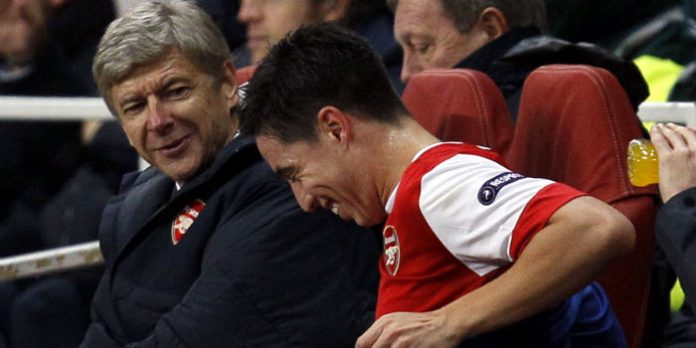 Yesterday police in France confirmed that Marseille’s president, Vincent Labrune, and his two predecessors, Jean Claude Dassier and Pape Diouf, had been arrested in connection with a two-year probe into a commission paid as a result of striker Andre-Pierre Gignac’s arrival from Toulouse in 2010.

What has this got to do with Arsenal? Well according to a report in French publication Le 10 Sport (brought to our attention by the eponymous Sport Witness), Samir Nasri’s £12 million move to Arsenal in 2008 could also be investigated as police widen the search for evidence of alleged illicit payments.

It’s important to stress that there’s no suggestion Arsenal have done anything wrong (aside from signing a chinless megacunt), but you wouldn’t be surprised if Arsene Wenger gets asked about the situation in his pre-Manchester United press conference.

Wenger has a famously prickly relationship with Marseille that dates back to the match-fixing scandal of the early 1990s when his Monaco side were seemingly diddled out of a couple of league titles by the Stade Velodrome outfit. ‘The worst period in French football history,’ Wenger he has since said of Bernard Tapie’s corruption.

Arsenal aren’t the only Premier League club that could be caught up in the latest scandal to rock French football. The details of Didier Drogba’s move to Chelsea in 2004 could also be scrutinised by authorities.

For now it’s a case of watch this space…

So even when he hasn’t been with us for a number of years he’s still causing problems.

Nasri is the gift (or a headache) that keeps on giving.

I doubt AW did anything shady though. He would rather lose the deal than do something shady.

Now, Mourinho on the other hand…..

I too doubt Arsene had anything to do with any wrongdoing. Still, 3 game touchline ban, and no christmas pressies as UEFA love him so………. 😉

The Ghost of Paul Robinson
Reply to  Mark Hughes

giga or teracunt is more appropriate for this fellow.

I prefer to call him a Megacunt.

Yes, however the current description is slightly inaccurate.

The CORRECT description should read…
“Unappreciative, chinless megacunt and money-grabbing uber-wanker who’d sell his own nan for $$ and deserves to get flares thrown up his arse by opposition fans when his team plays Galatasaray.”

I bet John Terry had something to do with this.

Marseille are such a lovely club.

I thought I should never see that face on Arseblog nor see his name mentioned.
All we got to hope for now is a few years in prison for Mr. Samir! 🙂

I hope they find Chelsea and Mourinho guilty.
And lock him in a dark room, playing Phil Collins music on loop for the rest of his miserable life. Or ship him off to Guantanamo Bay.

The problem with him being such an awful person is that he would probably enjoy the endless Phil Collins.

A couple of days ago, my radio alarm clock woke me up with that bastard singing about how Jesus knows him.

I haven’t slept since.

50 Shades of Gandalf the Grey
Reply to  Amusa

Where he is forced to eat Big Bob’s cockmeat sandwiches for the rest of his days.

And apparently nobody will be investigating the obvious tapping-up of Na$ri by Man City in the run up to his money-grab. Obviously, this is because Man City run such a clean ship.

I think you should go and get your fuckin shinebox

The only thing I ever credit Nasri for is for finally coming out clean in a recent interview and admitting he’s a self-centred selfish money grabbing judas cunt.
Obviously not in those words, mind.

Believe me, I have no particular soft spot for Nasri, but the word “cunt” is sexist and offensive to women, including the many female Arsenal fans who read this site. If we must use human body-parts to belittle players we feel betrayed by, let’s at least try to use ones that don’t also belittle half the population.

Was born a Gooner
Reply to  Nick

He’z a dick then…
Even now?

Must admit, I’ve never used the C word to refer to any body part. In what context would you?
But yes, it’s a bit harsh.

As Grandad once said… ” I don’t use this word very often, but that man can only be described as a cunt!”

One morning on her school run, my missus had an SUV battle with another mum – over a parking space.

She had no reservations using the ‘C’ word to describe our child’s classmate’s mother!

If female fans are reading these news reports and blogs, then they are going to be used to seeing the word cunt as it is used regularly. While chivalry is lovely, why not let women speak for themselves?

We actually used the word ‘megacunt’ which isn’t technically part of the body.

Yep… the megacunt was a mythical creature built of sh*wcross and mou*inho vibes. It kinda looked like a nutsack.

“For now it’s a case of watch this space”

And immediately below I have an ad for a watch!!

Forget skynet, it’s the adbots that are gonna take over the world.

In all fairness I think many women would agree that Samir is a chinless megacunt. The sad thing is that players like him couldn’t give two figs about how they win medals. In 40 years time he will show them to his moon-faced offspring and claim that he played a key role in winning them…

I was gettin excited for a while there.’ Was hoping that the reject had gotten himself in some problems y’know. Or that France made a law which could convict asshole(s) to jail, would be a class-act for other countries to follow. Jokeing aside, french and italian football have always been a little bit corrupt.

Interesting fact about Samir. As a teenager he once swallowed 11 litres of listerine to rid himself of the shite that routinely conbusts from his mouth.

I’m only happy about this if it means that Arsenal will have to go back in time and not buy that little shit. Then we could take the money and spend it on something more useful, say a Michael Jackson statue.

Hahaha, We hate Samir so much that any new fan will feel it’s club obligation. Or is it?

Blogs, I am french and I can tell you that le 10 Sport is about the wort sports website is France.
Worst than the Sun. So while the investigation is true about Marseille, the story about Nasri was made of based on Marseille’s problems at the moment. There is no basis for this, just newspaper clickbaiting. Don’t fall for it – you wouldn’t quote the Sun I guess, avoid le 10 Sport.

To lighten the mood: Q: How do the French hold their liquor? A: By the ears. We really should be talking about the Dutch skunk and how putrid he smells. At least Nasri admits he loves money. And RVP-DS was our captain. Gutless mega-cunt with a glass chin. The BFG is about to smash it. PS: Cunt is not really a swear word these days. Where I come from, if someone is a good cunt, then that’s high praise indeed. Even: ” he’s not a bad cunt” is acceptable. If female fans don’t like it, stop calling every male you… Read more »