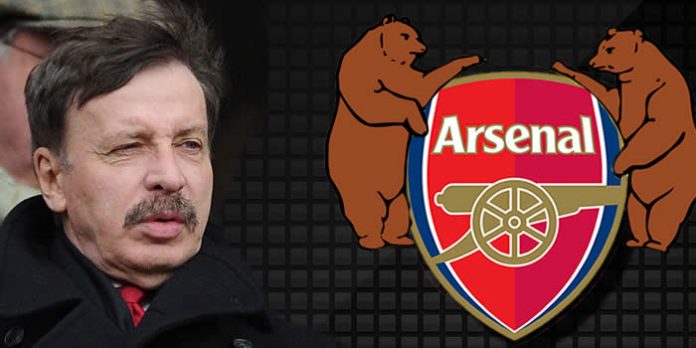 In news that is sure to go down badly with Arsenal fans, Stan Kroenke is planning on making changes to the nomenclature of the stands at Emirates Stadium.

The American accepts that the ‘North Bank’ and ‘Clock End’ are untouchable in the eyes of the Gooner faithful, but sources close to the Arsenal boardroom have told Arseblog News that he wants to put his own stamp on the club as he consolidates his position as the majority shareholder.

There is genuine worry on the part of some board members that some of his plans, which he referred to as ‘The Kroenkeisation’, won’t tally with the tradition and history of Arsenal, and a suggestion that he would modify the logo was rejected out of hand.

Born in Missouri, Kroenke wanted to add two bears (present on the state flag) either side of the famous cannon to represent his heritage, but grudgingly had to back down.

However, the American businessman, who has shown his ruthless side on the other side of the Atlantic recently with his plans to relocate the St Louis Rams to Los Angeles, is insistent that his ownership of the club is reflected on a day to basis.

As such, from next season on the west side of the Emirates will be known as the Clampett Stand (after Kroenke’s late father E. Clampett Kroenke), while the east side will become the Walton Stand after his wife, and heir to the Walmart fortune, Ann.

“The board felt like they had to give in on something,” our source continued. “It was all very awkward at the meeting as Stan and his son Josh were convinced the logo change was a great idea.

“They even had a presentation done with a mock-up of what it would look like and high-fived at the end. Ivan Gazidis was aghast, Ken Friar looked as if he was going to kill somebody, while Sir Chips Keswick made outraged barks so high-pitched they could be heard halfway down the corridor .

“It took Arsene Wenger to calm them down and reach the stand naming compromise, which nobody was really pleased with but they felt it was best to give him something to keep him happy.”

The source also revealed that before his decision to move his NFL franchise to LA, Kroenke had made overtures to the sport’s governing body move the team to London to ground-share at the Emirates, buoyed by the success of games being held at Wembley over the last number of seasons.

In that instance the move was shot down by the Arsenal manager who had concerns over the effect on the playing surface, and he refused to countenance even preliminary investigations into a roll on-roll off surface which would see football played on grass and American Football on an artificial pitch.

“He’s been spending too much time in Colorado,” Wenger quipped making the *smokey-smoke* gesture with his thumb and index finger.

was expecting something a bit more subtle today 😀

I’m really really worried by this. I thought that it was bad enough them not putting money into the club like Aramovitch, settling for 4th each season. But now this.

I heard they were going to charge extra for seats in those two stands to reflect the honour of sitting in stands with those names. Like they did last season but just in those stands.

Has anyone heard of any other things that they will do to us poor Arsenal fans?

why not
Reply to  CB

I thought i was slow this morning

I think CB was going along with the joke chaps!

Thanks for spotting that! I tried to make it obvious.

Gunnanarama
Reply to  why not

Hey Nose hair! Naming me in your response could be construed (in a fleeting glimpse) that I said something unfunny!

Take it back you Rotter! 🙂

🙂 What I meant was, we were thumbing CB down because he wasn’t funny, at least that’s why I did it.

You already got it – Diaby played 90 mins.

Diaby played a friendly match for The Arsenal last night

Oh dear! I posted a real original didn’t I? Apologies to all.

Thanks for making it easy to decipher the April fools joke there for the not so intelligent ones like myself. Good day to everyone. Diaby is back. Happy days

Not sure if continuing April Fools trend…

Hey, it wasn’t “easy” to decipher for some of us detective. I’m a bit embarrassed, but I can definitely see the renaming of stands happening but was surprised they weren’t being sold for corporate naming rights. The bear thing was a little off, but Bloggs saying it didn’t make the cut made it a little more believable that it was proposed. And Bloggs tends to use “his sources” a lot so I’m used to seeing some ridiculous “quotes” in his articles. Needless to say, I’m a fool and need to stay focused on what day it is. At the start… Read more »

Thought the April fools was Diaby and Wilshere playing in the same match without one losing a limb…..

That rumor was disproven because Jack was in Colorado with Stan ‘touring the Rapids facilities’.

And to think I nearly fell for that…..

I actually thought that Diaby’s return was an April Fool’s prank!

Blogs you’ve got me so bad in the past, I’m too clever for this now. That time when major websites copied your article on the expansion of the emirates… it was almost as good as the Carl Jenkinson’s dad saga!

Everything seems cool apart from Ann would be the heiress…not the heir…you almost had me there buggerlugs.

Just wait until Coquelin becomes a legend.
Then we’ll have the “Coq Stand.”
I’ll go and take my medication

Don’t the bears on either side seem to be humping the logo? Do they represent Kroenke and his son, since his dad and wife are already represented in the stand names? Sometimes you just wonder …

Would actualy love to see Wenger do the *Smokey-smoke* gesture in reality. That would be epic. Happy fools day !!

Everything else I could see happening 😉 😉 😉 …but, once you said he’s “spending too much time in Colorado” I knew it was April Fools 😉 😉 😉

Though he’s got all the sports franchises here other than American Football (Broncos) and Baseball (Rockies) he’s never here. If he is doing the *smokey* *smokey* *puff, puff* thing he’s doing it illegally in Missouri.

Good one, had me going for most of it. What I like best about these gag articles is how they start off so believably, sucking me right into the joke, until I reach the end all ready to explode in outrage when a little voice in my mind goes “waaaait a minute …” and then I realize I’ve been had. Again. And then I reread it and by the second paragraph I’m thinking “How did I fall for this?”

Not only Ken, I was also gonna kill somebody! Ann stand? Ffs! Hahaha!

I’d just drawn some bears on my Arsenal shirt when I found out I’d been fooled.
How’s mum going to wash felt tip pen out of it now!?
Thanks for nothing ARSEblog!

I almost killed myself. Seriously.

Oh this really wound me up you bugers…

Fly Kroenke on the jerseys would have been a better compromise right? Right?

Now can we start an item that Kroenke wishes to sell Colney and purchase White Hart Lane as the Gunners’ new practice ground? You know, to consolidate our pre-eminence in North London or some such?

Yes, you got me too. Brilliant piece. Bears and the cannon, my Lord …

If they change the logo to cannon wielding, cigar chomping bears, I might just buy it.

Poor Arsene. Now he’s got to sell a player to fund the 3 million pounds fee charged by Kroenke for
‘strategic and advisory services’ rendered.

Haha, April fools day. Almost had me there, the Bears and the logo gave you out.

Not to me it wasn’t. I was furious for a few minutes. Don’t put ideas into Kroenke’s head…. please.

Lol it wasn’t til the “they high five at the end” bit I realised what today was lol.
I’m still not sure the diaby played a game last night isn’t an April fools either.

Also.. if that cannon on the logo goes off.. the bear on the right is going to get hit fair in the coquelin.

But the question is what did Cygan had to say about all this none sense?

Lol almost fell for it you kind of forget

Double bear cannon arsenal logo?…Clampett stand?…….First thing that came to my mind was ….WTF!?, is he on drugs?….then realised what day it is!

I own up and take it on the chin like a man………I am an April Fool!

We could accept the two bears with Stan in the middle as the logo for April Fools day all over the world..

In the midst of reading the serious stuff, it always takes me a moment to realise when I’m reading a bit that isn’t serious. Hopefully it’s all an April Fool’s joke though :o/

Got half way through that before I remembered what day it was. B$%tard.

Have to admit, it was embarrassingly close to the end when I copped on….I wouldn’t mind, but I was reading it while talking to a mate about April Fools Day.

I forgot what day it was lol….. bastard!!

I got halfway through and as my temper was just about to explode in my office, I realised that this had to be a joke (although wouldnt but it past the yanks), nice one 🙂

They left out the meeting minutes describing how Stan also wanted to have the SEC aquire the BPL in honor of his alma matter’s recent inclusion into that collegiate athletic conference.

My wife gave birth to our third son at 12:43 this morning so I read this not remembering it was April Fool’s Day. Believed the whole thing until the last part with the “Wenger Quote.” Great work…. But a little scary how believable it is that Kronks would try and change the logo.

The Grizzly Gunners has a ring to it, bear faced cheek says I

Yeah. Totally believed that. Well done. Even the last bit, but alas, that may be because I too have spent too much time in Colorado *makes smokey-smoke gesture*