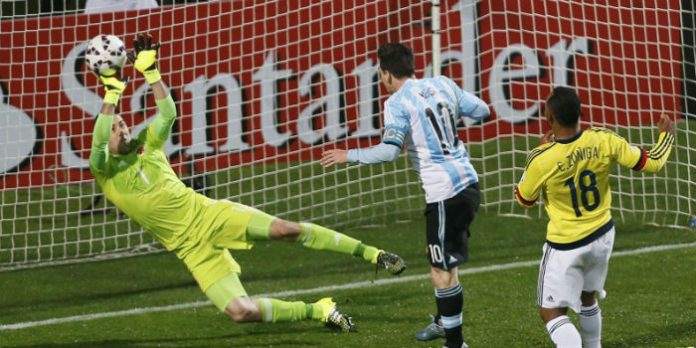 David Ospina’s Copa America dreams were left in tatters as Colombia lost to Argentina on penalties on Friday night.

The Arsenal keeper produced a string of fine saves to deny Javier Pastore, Sergio Aguero, Lionel Messi and Nicholas Otamendi, but couldn’t replicate his heroics in the shootout.

Argentina will now play Paraguay in the semi-finals after the latter knocked out Brazil in a similarly dramatic shootout. In the other semi-final Alexis Sanchez’s Chile will play Peru.

Ospina, who only conceded only one goal during normal time in the five games he played in Chile, will now head off on holiday before deciding on his Arsenal future. The stopper has been heavily linked with Fenerbahce in the last ten days in light of Petr Cech’s imminent Emirates arrival.

Those were brilliant saved from Ospina. It was also nice to see the South American fans chanting Ooooooospina!

Come on, man. A week ago everyone was calling for him to leave in light of cech’s imminent arrival. I say keep him. Fuck all this stuff about szzzzzzcezzzy become world class. Ospina is already the superior keeper so why not keep him?

Because Ospina is too good and too young not to be first choice at a big club. His Opta stats for last season are nearly as good as Cech’s, possibly better in reality when you consider that his are based on league games and Cech’s on the less challenging domestic cups.

Because Messi and Aguero do not play the same way as many Premiership teams…I’d love for us to pick keepers purely on shot-stopping and having an awesome chant, unfortunately the way they deal with aerial bombardment is pretty important.

True, and Cech is psychologically in a position to boss the defence. Coming from a successful club where he has won everything he has a huge advantage over the modest, newly arrived Ospina, who didn’t even speak very good English. The other plus of Cech, I suppose – and paradoxically – is that he is old so Martinez will believe it’s worth sticking with us for a bit rather than seeking his fortune elsewhere. I love Matinez and hope that this season’s loan spell in Spain will be just what he needs. Though I don’t share the widespread euphoria over… Read more »

Keep Oooospinaaa to fight for No1 spot with cech and send szczezny on loan in prem to play. Sorted.

Ospina will have plenty of options if Arsene decides to let him go or if himself decides not to play second fidèle.

He won’t be the first ( Ala fanbiaski).

Oh man, Chile just keep on going. That’s bad for us, especially if we are to sign Vidal.

i haven’t seen a lot of vidal, but haven’t much interest in a player who played THAT badly in the champs league final. not only was he stinkingly poor, but he looked so far out of his depth running about trying his best to get sent off in the first half. I think even flamini was sitting at home watching going ‘wooooaaahhhhhh….jesus calm down mate’.

I’d much prefer Cavalho. He’s younger and more versatile – he can play in central defence – and therefore better value long term. Trouble is, his buy-out clause is 40m (euros) and after his performances for the under-21s and there’ll be massive competition for him so even 40m may not now be enough. If we rejected him last year, presumably for being too expensive, I can’t see it happening alas.

Unfortunately quite trustworthy sources linked us with Vidal early last season so I wouldn’t be that dismissive of the current rumours.

umm… if his clause is 40 million then that will be enough unless they did a Liverpool on whoever bids on him (wich won’t be us because he’s overrated and overpriced).

i hope we don’t spend money on carvalho.

Strange situation with our keepers. Whoever is number 1 next season better be aware that good isn’t good enough for this Arsenal side anymore.

That’s nice mate, but we’re replacing you with a Chav, so shove off to Turkey, ok? We’re The Arsenal, we sign stars, we don’t make them.

Rather have too many top quality keepers in the team, than none at all.

Ospina showed last week against Brazil….somebody wrote the Brazil syras the likes of Neymar are not big enough compared to BPL forwards.. This week against Argentina….with the likes of Messi of all players and Aguero, Di Maria….its another shutdown from him. What some of the fans are saying…oh we still one a world class GK!! Let me tell these folks….we already have a world class GK in the ranks….and he is David Ospina!!
I hope if he really leaves, Arsenal do not regret the decision with having Cech & Szczesny !!

“But Szczesny is higher!” yada yada yada. I guess speaking on Facebook gets you more favor from the fans than speaking on the pitch.

Would rather keep him over the pole, sentimentalist (which i guess is why some ppl prefer the pole, cuz he is home grown, and have some kind of potential that i fail to see sometimes, he has been first choice for years now and havent actually showed that big potential) wont take us anywhere. Ospina is WAY MORE focused than szcz, more mature, professional and calm. Only thing the Pole has over him is height and ego that rivals bendtner’s…and with just one and a half year of age difference, i fail to see how he wont gain from cech… Read more »

Some keepers peak early just to fade away with age (Almunia, Mignolet) while some peaked very late as they approached 30s (Van de sar) While some maintained steady growth in their career (Buffon, Casillas, Cech) so I can see Scez in the mold of the latter. He is a keeper that will win us many titles in the future all he needs to do is to prune some of his ego.

Not willing to see our club suffer for the sake of waiting for him to realize said potential.

There’s no way we’ll keep Ospina over Sczcesny. Szcz is a homegrown player, should think his value is much higher to the squad as it frees up a non-homegrown berth for use elsewhere. He’s lucky for sure, as in the last 6 months Ospina has been the better keeper, but that, plus the fact that he’s a previous golden glove winner and a little bit younger probably means he’s just hanging in there. We’d be nuts to have Ospina, Szcz and Cech in the same squad as all of those must be on 50k plus. You’d think Arsene would have… Read more »

Cech, Vidal n Higuain/ lacazette/Benzema..why Vidal? The guy will be the closes thing that we can compare to Viera + him n Ramsey can rotate, with Ramsey injuries history..Vidal will be awesome. Imagine him crash his Ferrari into John Terry face!!!

Ospina is a decent shot stopper but that’s not enough in PL football! How often do teams even get shots off against us anyway? We concede from corners and set pieces more than anything else.

Ospina is great for highlight reels but the reality is he’s too small which is why he has to do impressive dives to stop shots that Szcz would handle with ease.

All this arsenal rumours…..cech, Vidal, talks of title possibilities are sure putting the gunners up there where manure was, where chitty fell from and where mou is struggling to reach. This sort of makes big boots kinda look arse side and think…they are the deal now, huh. Sorry Rvp, this is not ambition, it’s home where we belong. Cess…wrong decision mate, if you are leaving barca…..you come to arsenal, else you suck. ..bi**h

It all comes down to AW’s opinion of Ospina’s season. For us to be signing Cech it means there is room for improvement and Cech will instantly become the new #1. AW will have to decide out of Szczesny and Opsina and he could prefer having the calmer presence of Ospina at #2 than the inpatient potential of Sczcesny. I don’t want to see the back of Szczesny personally as he has the potential and ego to be a top top keeper. The problem is I don’t see Szczesny reacting well to the idea of going out on loan. Wenger… Read more »