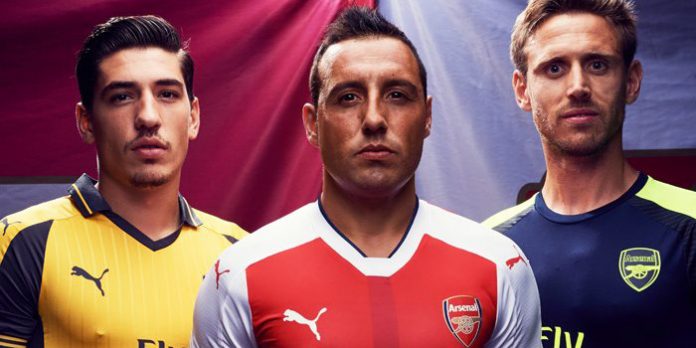 Arsenal have officially unveiled the new away kit, and the third kit which we’re contractually obliged to wear at some point. Probably in a game when we could easily just wear the home strip.

The launch took place last night in Los Angeles, with Hollywood star Jamie Foxx in attendance. Why does he have two Xs in his name? We’re not fans of superfluous, unnecessary consonants. Yes, we’re looking at you people called Matthew. One T would be just fine, stop being so damn greedy.

Anyway, it was an all Spanish trio of Hecttor Bellerin, Santti Cazorla and Naccho Monreal who were on modelling duty last night, as you can see.

It’s very difficult to argue with that.

Shirts are too fussy for my liking.
What’s with the half collar on the away shirt?.. That line down the middle on the home still bugs me.

And I can’t take the third one seriously? Anyone else?

Why not? The third one reminds me of Borussia Dortmund’s shirts, it looks very nice. The line on the home one doesn’t bother me either. Maybe the half collar is a bit strange but that’s it.

The third one is a Chelsea kit

Well, I’m glad you’re not the ones designing the jerseys. This is 2016. Nothing wrong with going with more contemporary touches like a half collar.

X and T are consonants. You’d be rubbish on Countdown.

That’s amazingly rubbish from me. Now updated, thanks. I’m off to do 100 lines.

Punishment ones. Not cocaine.

You should snort some marmelade LIVE on the next Arsecast, as punishment for your egregious grammatical transgression.

Sounds like blogs has been watching too much Mr horseman.

You got one dislike from me. But only because i was laughing and clicked the wrong one.

Or pissed at Rachel Riley.

“I asked for a consonant and you pulled out a goddam ‘X’! What is wrong with you, blondie?”

I hope Santi gets his own Netflix spin-off series when his contract is up.

The Flea, or something.

Mertesacker’s already playing “Big” Ant-Man in the Marvel movies. so I don’t see why Santi can’t get in on the fun.

I really like the 3rd kit and will make this one my annual purchase. It’ll go a miniscule way to helping us fund a massive transfer fee

The third kit is actually not bad, but not really necessary apart from making extra sales.

…to Javis, and maybe some other random rich guy.

Just wait til Gabriel mistakes Santi for da Costa in that kit and goes through both his knees and an ankle at the same time. I think that kit is criminally stupid.

Puma is known to be the more ‘fashionable’ sport brand. They’re just trying to get more youngsters to buy it. They go crazy over those fluorescent colours. My younger brother (not an arsenal fan ?) loves the kit…

New Away, and Third Kit are quite odd names for our new attacking players. What are the origins of these names, Samoan or something?

isnt New Away a centre back?

Third Kit is the 3rd son of Ertha Kitt (the legendary star of stage and screen), he plays upfront for his local pub team and is thought to be better than Theo by his mum.
http://www.earthakitt.com/
🙂

earthakitt? Isn’t that Welsh for “Bury a cat?”

So the away kit is yellow and grey instead of yellow and blue in the end. I would have liked blue more tbh but it still looks nice. Third kit is the first kit I won’t buy for ages. It’s awful.

Why do they always make the 3rd kit so stupid?

So much nipple action. Being back Nike, for the love of god.

Hector must be cold.

“Superfluous, unnecessary vowels” would be Jamie Foox, which he might have felt it necessary to change for professional reasons. I presume you meant consonants.

You’ve been staring at that bird’s arse the whole time on Countdown instead of paying attention, haven’t you?

Anonymarse
Reply to  Snake in the grARSE

It is very nice

So is the rest of her

The away kit looks nice, more traditional looking and the third kit, while a little drab, is an improvement on last years’s eyesore of a kit. If Arsenal buy a striker just maybe I will consider getting my first yellow away jersey from them!

In a recent puma interview, Santi said Nacho had the worst dress sense in the team. So I imagine he probably asked to wear the third kit for the unveiling.

He said Nacho has bad MUSIC taste. He carpools with Nacho sometimes.

Maybe the 3rd kit has a built-in mp3 player.

Hey basically said nacho is the worst at everything, which makes it funny considering they’re good mates

What happens if we play someone who wears red and yellow stripes?

yeah there ’cause are so many teams with red and yellow first kits.

If they’re at home then they get to choose which kit they want and we have to work around that.

Get yourselves some retro kit from the 30s or the 70s and you’ll never have to buy a shirt again! ?

Away kit is too fussy and has a horrible collar. The third looks like a cheap League One teams away kit bar the dodgy betting sponsor. Both are terrible and make the home kit look like a work of art.

Bellerin looks good whatever he wears.He’s got the quality to be face of the arsenal.

Rozza the samourai
Reply to  Matt

Still better than the sweat stain prints on last year’s away kit.

And the people taking Arseblog seriously with the superfluous comment are making me wonder if they’re reading him for the first time :/

I really like the away kit, not sure about the stripe on the home kit

3rd kit looks like glow in the dark pyjamas

Very true! If the floodlights ever go out we’ll be fine, so maybe the kit was made like that for safety reasons!

Hector has a lot of testosterone in those picttures!?!

Probably not, I can’t see Giroud in the pic

Hector and Santi have got the new kit promo pictures facial expression down, but Nacho just reminds me of that taxi driver bloke who ended up discussing the latest tech developments on BBC News by accident.

Nacho looks like he knows what I did last summer…

More money from us to not spend on players. As I live 100 miles away I only get to half of the games as a red member. Just bought a ticket for the Liverpool game, which it’s hard to be enthusiastic about with half the team on holiday. Only £127.

Probably the best trio of kits we’ve had in a while.

Really like the third kit, least on those dark nights we’ll be able to pick a team mate for a pass – whether it gets there, another story 😉

Though I always feel like that slightly darker line down the front of the home kit just looks like a perspiration stain.

So long as I don’t go anyplace that has blacklights, i don’t mind the third kit.

I quite like the top Freddie’s wearing, but the yellow zip down the middle just spoils it for me. There’s also a vertical one on the back with Arsenal written on it. At £60, it’s a bit steep!

For fuck sake… I thought the yellow away kit was gunner be nice! Its fucked up by those horrible fuckin socks! Why didn’t they use the same template for the home kit socks with the top 5/6 inches of the socks black or Grey to break up the socks as I always prefer stripes on the socks! As for the 3rd kit I DESPISED it when I first saw it last month leaked but seeing it on Monreal, I actually quite like it.. I don’t mind it but it does remind me of a Chelshit shirt tho. But the Away… Read more »

The third kit is lovely, in my humble one.

I really don’t care what we wear, as long as we come out and win games in it.

That’s some nipple on the boy Hector…

Freddie is such a sexy beast….Dammit. Looks better now than his playing days. I just keep getting fatter and paler (if that’s actually possible) the older i get.

Well whichever the case, it’s hell better than the omg purple that once appeared.
But to our team,
I seriously think
Kos Holding Chambers Coq
Will be vital to our plans this year.
And I like how it sounds too when you read it together.
Though I still think we need a more established partner for Kos
Kos Coq long or short term just does not sounds right.

I dunno what some people are whinging about, they are all really decent kits for a change especially the
third one. It does remind me of Borussia Dortmund kit and we could do a lot fucking worse than following their example on the pitch …

Hate the half-collar on the away kit

You would think from the revenue gained from this tour, they could put a little on the heating budget during the photo shoot…

Reporting in from Real Madrd v Chelsea in Ann Arbor: John Terry is still a cunt.

Yankee Gooner, over and out.

That flourescent shit looks horrible too.

And his recent quotes just as terrifying

Monreal has got the ‘oh bollocks’ look of someone who knows he’ll be playing centreback for a bit.

For some reason I’m having a hard time believing that hector is so much taller than Santi and also taller than nacho.

Isn’t one Puma badge per shirt enough? Three, really? Maybe there are even more round the back…