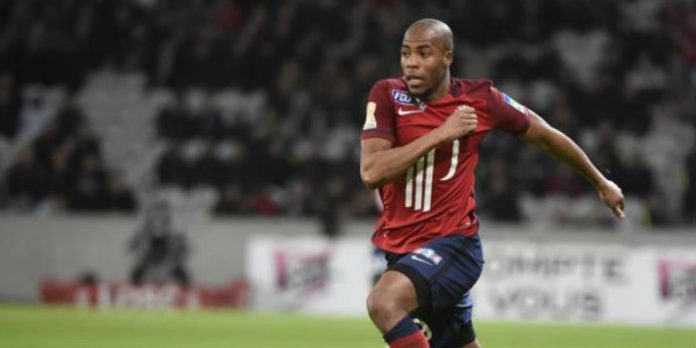 Back in July, L’Equipe reported that Arsenal attempted to hijack Monaco’s move for Djibril Sidibe, a defender who at the time was contracted to Lille.

We were a little suspicious at the time, assuming the story to be the work of an agent looking to hurry negotiations. When the 23-year-old sealed his move to the Stade Louis II just days later we felt that stance to be justified.

It now turns out that Arsene Wenger did indeed bid for Sidibe with the player admitting it gave him food for thought.

“I was on the brink [of signing for Monaco] and [Arsenal] gave me a headache by making a bid at the last moment,” Sidibe told Le Parisien while on international duty with France on Monday.

“After reflecting on it, I was not certain my playing time would be guaranteed.

“I would have played maybe 25 games this season, including the cups. They also wanted to use me on the left whereas I want to establish myself on the right.”

It’s interesting that Sidibe highlights our eagerness to use him on the left, a position that Nacho Monreal has made his own in the last two years. Were we ready to let Kieran Gibbs leave? It makes you wonder…

Sidibe is the second player in the space of a few hours to reveal their contact with Arsenal. Leicester’s Riyad Mahrez made similar claims this morning.

Any time I read about a player we didn’t sign talking about his playing time being guaranteed, I get the feeling that we dodged a bullet.

Surely it would have been Gibbs. Fair play to him, he’s been very professional since losing his place to Nacho.

Unlike a certain frenchman

Even Xhaka’s playing time was not guaranteed until Coq’s injury. Glad that players have to grab their chances to have a playing spot in the squad now.

Thank you sidibe.You are the reason we instead landed on a gem called Mustafi

Does L’Equipe have an algorithm of some sort?

So essentially he was thinking he wouldn’t be able to keep Gabriel out of the team, as Per is injured and Holding is yourng and raw (and is awesome). Nice confidence there…

Fair enough. We have Mustafi! 😀

Oh wait, is he a Full Back?

Kinda feels like he wishes he came to Arsenal…

I don’t like the word snub. Makes it seem like he turned us down because he didn’t fancy. When in fact it sounds like he didn’t know if he was good enough to be a regular starter for our team.

The rhetoric needs to change about arsenal signings I feel.

LB is sorted, Xhaka is friends with Rodriguez on Wolfsberg 🙂

I think he’d be a great signing of Gibbs wants to leave or we want to upgrade. Monreal’s looked better since a couple of so-so games to start the season.

This article should be re-titled:

France international confirms he lacked the bottle to join the Arsenal.

Does. Not. Compute. Gibbs DREAMS of getting 25 games and he’s twice the player this guy is (because he’s Arsenal through and through)

Forget this guy, the question is why we didn’t go for Raphael Guerreiro?? He cost BVB just 12m euros and is better than what we have at lb. Plus he is also versatile enough to play as a CM. That was a huge miss by Wenger. Thought we’d be signing him after being linked to Ricardo Rodriguez all summer.

Sometimes get the feeling Gibbs is a little too content to be on the bench, obviously we don’t want another Debuchy on our hands but just wonder does Gibbs have that extra desire to kick on sometimes.

Thank God we didn’t sign him, he seems an average player to himself and me too, judging from his words.

Trying to join the dots across Wenger’s snippets during this & previous transfer windows. True to his words, they were working hard behind the scenes making all these bids. Also judging by his own words, about spending the clubs money like his own, he seems to have a strict valuation of the players. However, most teams (obviously) value their players higher but more importantly want to sell for silly money from the likes of Real, PSG, Man U, Man C – lets just say the cunt clubs. He puts the money where his mouth is, no media maneuvering to get… Read more »

Everyone and anyone is linked to us because it pays to be linked.

Just because we contacted an agent does not necessarily mean we are ready to make a bid.

We dodged the bullet with Vardy. Sidibe who? We have Mustafi who has turned out rather well. note to press. Not bad for a 35m panic buy like our 42.3m panic buy Ozil. Ever heard of David “sideshow Bob” Luiz? Cost a certain small club 34m on deadline day. Bet we snubbed him too.

Rather joins an illustrious list of MVilla, Melo, Capoue etc all prescribed by press as world beaters.

I’m sure we snubbed them too. In fact we didn’t even bother. We was saving the money for Granit.

Sounds like the plan was to have him as understudy to kos the boss, with gab/mert/holding battling it out on the right? Glad we got mustafi who makes an immediate impact on the team ?

meh. Never heard of him. Don’t care. I like Gibbs and Monreal.
I still hope we see Gibbs take his first team spot back, without wishing any ill on Monreal because I think he’s been really good for us. I just find Gibbs a bit more exciting going forward and he’s quicker.
I suppose the balance would be off a bit though as Wenger tends to like having one attacking full back and one more defensive and Bellerin is probably the best attacking full back in the league.