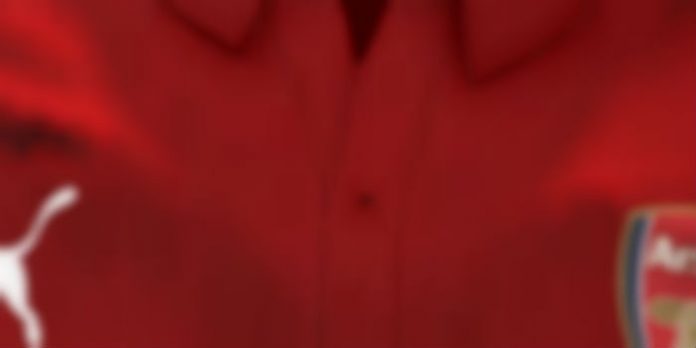 No, not the car driven by Michael Knight, in his eponymous, groundbreaking reality TV show Knight Rider, but the shirts Arsenal will wear next season.

Some pictures emerged last month, and now it seems there have been some more to get your teeth sunk into. And by teeth we mean eyeballs, although imagine someone who consumed their own twin in the womb and had teeth in their eyes.

The Home and Away shirt for next season #AFC pic.twitter.com/rf3tr39piO

Some of the marketing bumph has been revealed also. The home kit is apparently ‘A shade of deep red that represents the blood running through the hearts of all Arsenal fans’, while the blue away kit is because next year is the Chinese year of the spider, and the marketing team have been working to attract new fans in that region.

The description reads, “The blue is reminiscent of the glass spider of the Zi Duang province, who has blue eyes almost like a human’s. They shed tears at the wintered turn of the centuries, much as Arsenal will forge their way to success through immaculate vision and prestige.”

Amazing. This is what we’ll be wearing whilst enjoying Europa league football next season.

I like your optimism! We’ll need to up our game to make that come true.

If the team keeps putting in performances like the shit show against Westbrom they will be lucky to play in the Europa league.

I’m guessing the alternate is a shade of brown for the shit the fans put up with.

Both of those kits look fucking grim.

Too Drunk To Be Offside
Reply to  IamaGoober

Now we know why both Sanchez and Ozil are refusing the sign. The Mystery is solved.

Ouch, this ain’t April 1st yet.

The home kit’s all right. I don’t like the away kit – it looks as though it’s been left half in the sun for a whole summer. And did David Bowie write that marketing blurb? It sounds suspiciously familiar.

Aha, the token blogs insertion of Bowie into an article!

Anything to take your mind of the current state of affairs, eh blogs?

John Terry is a cunt!!

It’s a good idea to be honest. I am against all those ideas of not attending matchdays because it can create such a venomous environment around the club but boycotting the shirts will surely be noticed, make the fans heard and at the same time not disturb players morale much.

Also, if actual fans don’t go, the football tourists are more likely to take their place, buying low quality, over-priced tat from the Armoury, thus generating more money than a grumpy regular who might buy a programme and a manky slice of ‘pizza’ if Arsenal are lucky.

I agree. I’m not contributing a penny to Wenger’s 8 mil for next season.

surely the explanation for the blue kit should have been released on 1 April, blogs!

Semantics… but there is no year of the spider

The collar on the home kit looks more monstrous than Harry Hill’s!

How about we run a boycott of kit purchases until something changes. Surely the American will notice that one

As I understand most kit deals, a majority of the sales go to the manufacturer – where the club makes money is the deal allowing said manufacturer to make our kit in the first place. If you don’t like it, don’t buy it, by all means, but even if you don’t it hardly affects Arsenal specifically.

Down with the truth!

Arsed Off
Reply to  eddymc2

Even if that were the case (the club still get a percentage, hence why Madrid pays so much for stars that they know will sell a lot of shirts) then it still affects the club when it comes to renegotiating for a new deal. Weak sales = weak positioning.

Let’s harm the club financially so it has an even harder time pulling itself out of the rut. Great idea!

As much of their gear is otherwise really nice I expected more from them than what we’ve gotten so far.

Can you imagine Alexis in one of those? No, nor can I ?

I can imagine it.
Which is the closest I or anyone else will get to seeing it.

maybe we will get ad pictures of him wearing and advertising the kit in July because we all know the photo shot will be done in May, and that will be the closest we see him in the new kits.

BLUE??, FUCKING BLUE??. ITS YELLOW and blue. Wont be buying THAT.

As A Designer of Clothing myself i think i’m in fairly good position to say that these kits are Unoriginal, safe, boring, lacking in inspiration and intelligent design and basically cheap imitations of the past……They really are a great representation of the state of our club. I’ll get the Plane ready, can someone organise the banner? “WE ARE SO #BORED”

I’m a Wearer of Clothing myself, so we have something in common. According to your Expertise, however, I would like your opinion on which team in England actually has an inspired kit design?

I actually quite like the away kit, not so keen on the home one ?

Me, Myself and Arsène

may well be a controversial opinion, but love a blue arsenal kit.. memories of welbeck at old trafford and henry looking extra icy in that 02/03 away strip.

If Stan and Ivan are not going to wear it neither am I. The most those two tight arses have spent in the club shop was a fiver on a couple of lapel badges.

The one thing they are good for is wiping your ass with it.

Not crazy about either offering, but, it will be cheaper in the long run … won’t have to buy a CL version.

Puma is crap. Back to Nike or Adidas after this contract is up please.

Am I missing something? Don’t Chelsea play in blue…

I think the third kit should be a reproduction of Edvard Munch’s The Scream.

Sure. Or they could just use a picture of our faces at both Bayern games, which formed a decent enough impression of Munch. They could call the design “Bayern Munch.”

Arsene signed the deal, Kroenke et al. are leeches attached to the club……happy to take and never add, disinterested if the body dies as it will swim off and attach itself to another body. Ask fans in the US.

What? No pointless line down the middle?

Indeed not. I suppose they cottoned on to the fact that the appearance of a dribbling problem sometimes actually creates one.

Don’t like them but then as i won’t be renewing my season ticket i won’t have to bother buying one, more money saved, YEEEEE-HA

Anyone know when this puma deal ends? I hope we get Adidas next. All footy kits should be made by Adidas.

They look horrible but it will suit the team that are playing in them.

I thought the blue was to match the players’ faces from choking in March again. Apologies if someone referenced this earlier but I’m yet to read all comments!

PUMA is one of the worse labels for design just saying.

Would have preferred Nike or Adidas.

I was laughing at the marketing thing thinking it was a typical Arseblog joke. But it’s real?! What?