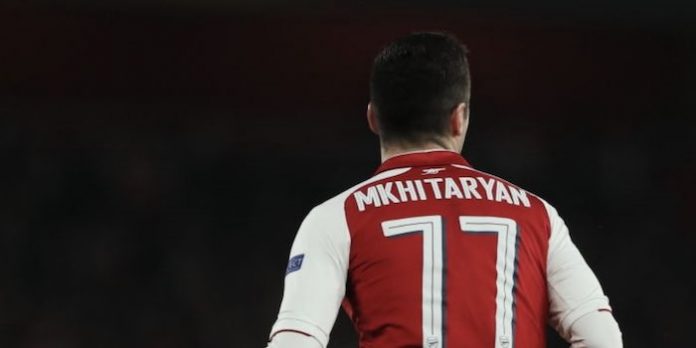 Henrikh Mkhitaryan says he didn’t have to think twice about joining Arsenal when the opportunity presented itself in January.

Seemingly taking another little pop at the style of football played by Jose Mourinho at Manchester United, the 29 year old told Four Four Two that the Gunners attacking approach was an important consideration for him.

“When I heard I could swap Man United for Arsenal, I said, ‘Yes, I want to do that, I didn’t think twice,'” he said.

“It’s important for me to play in an offensive team.”

The Armenian international has six assists and two goals since joining, and is pleased with how life at Arsenal has begun.

“I couldn’t have imagined a better start,” he said. “I’d missed playing offensively.

“I joined Arsenal because Wenger wanted me, not because he wanted to replace Sanchez. We are different players and characters, with different abilities and skills, so I’ll try my best to do everything for the club.”

“I want to write my name into Arsenal’s history and have my name as a legend here.

“I want to score goals, make assists and win trophies to make the fans happy.”

To read the full article, check out this month’s edition of Four Four Two – and check out this link for great subscription options to an excellent magazine.

Sounds great, like the motivation and happy for him aiming to be a legend, sliding those balls through to Auba and Laca to score.

better than that moaning cunt

My favourite thing about him is he comes alive in European games. We really needed to replace that x-factor with Alexis gone.

Love the honesty! It doesn’t seem like Jean scared of anybody but still a team personality. Great return already from him.

im glad Jean’s not scared of anyone too!

In stating that he missed playing offensive football, Mkhitaryan was simply telling the truth, rather than trying to “take a swipe” at Mourinho.

The fact is that even Man Utd fans miss Man Utd playing offensive football under
Mourinho. But that’s their problem now.

I’d say he was both telling the truth AND having a massive swipe at Mourinho. Which is what makes it so delicious

also the fact that it makes Man Utd fans sad

But thats exacly what ManU is doing, playing offensive football. Offensive to everyone that watch them.

It really feels like we’ve got the best out of the swap so far, mkhitaryan could have a good few years with us

Good. I still think we got the better end of the deal when you consider we risked losing Sanchez on a free. A player like Mkhi would cost upwards of 40million in today’s market. Outstanding bit of business. I was reading an article on a more generic football site this morning, effectively calling him a mediocre signing and labeling him inconsistent.The article is a load of hogwash and just another attempt to rile the Arsenal fanbase. The rhetoric is bankrupt and the narrative is expired given that we as Arsenal fans are all to aware of our teams deficiencies. I… Read more »

Was that generic site F365 ??
Those guys change opinions quicker than I change my bedsheets

Arsene signed sanchez because he could and we needed another marquee signing. Arsene wanted mhiki because he fits arsenal’s style, both on and off the pitch. The swap suits both teams on paper… But games aren’t played on paper and we have thus far got a far far better deal. Mhiki is potentially on less wages than sanchez was, he was contracted for longer to man u, and has given us more statistically. Sanchez, although technically free, would have been in the summer, is costing utd a mill a month, and points in games. How can anyone think they got… Read more »

A Different George
Reply to  Goonerink

Citeh could do with hiring Mourinho. I hear they had trouble parking the bus at Anfield…

“It’s important for me to play in an offensive team.”

That is enough for me this season 🙂

I’m growing more optimistic with Mkhi’s performances of late. After a Man of the Match debut, he was woeful the next couple of games. He has improved immensely and I really like that he has a go at the goal more often than the other players and his movement and passing is excellent. Onward and upwards I say !!!

Maureen is an offensive manager just not in a footballing way.;-)

pssst yes he did think twice about joining us (just in case you have forgotten) ….

I find it strange that some people just gulp down these empty platitudes and any thought to the contrary is sacrilege to the great name of Arsenal. Of course Mkhitaryan thought twice about joining Arsenal, he refused the first time when he joined Man United! Who wouldn’t think twice about joining Arsenal when we are 6th in the table, one star player wanted to leave, another (Ozil) hadn’t signed yet, and a squad full of under performing players only capable of focusing on a 6 game run in the FA cup?

I like Mkhitaryan.
Was well miffed when he went to that place.
n well chuffed we got him.

Sanchez was fun while it lasted
but not long term relationship material.

Laca, Auba and Mkhi – three class signings in my book.

-Seems weirdly fukn’ competent that we pulled it off.

If we get Ramsey’s signature on a new, well deserved, contract. That’s 4 incredible players in the squad, nay first team, on lengthy contracts which bodes well and we should be building around those guys. Xhaka is starting to find consistency in a positive way and living up to his price tag. Elneny, having just signed s new deal adds a calm, assured figure in the midfield. We need some additional players in the defence, unless we promote holding and chambers to starters over Koscielny and Mustafi. I feel Koscielny is on the decline and realistically has 1-2 seasons left.… Read more »