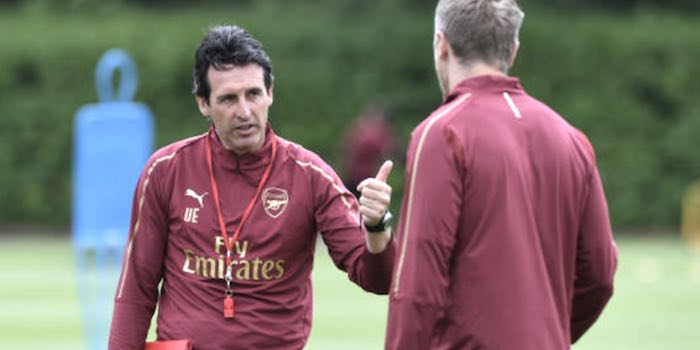 Arsenal’s Head of High Performance, Darren Burgess, says that Unai Emery is a workaholic who has made improving Arsenal’s defensive record one of his key areas of focus for the season ahead.

The Australian spoke in glowing terms about how things have changed under the Spaniard after he took over from Arsene Wenger, revealing that making the team organised at the back is something he’s been working on throughout pre-season.

In an interview with Fox Sports in Australia, Burgess said, “Most people recognised that our defence was poor last season we conceded a ridiculous number of goals around 50 or something which Arsenal hadn’t done in maybe 15 years so one thing he’s been working on unsurprisingly is making the team a bit more solid and better organised in that area.

“Obviously it remains to be seen how successful that is but that’s an area he’s focused on.

“He’s very particular on player positioning depending on where the ball is in certain areas of the pitch. His sessions are very intricate in that regard. Not better or worse to the previous way but certainly different.”

He was then asked about how things were different under Emery than under Wenger.

“Firstly, we’ve got a whole new coaching team considering Unai has brought in five new assistants all with different skill sets but also in the medical and performance departments as well,” he said.

“So yeah it’s been a real summer of change and very different with differing philosophies on training and how to work and how to prepare.

“It’s been a real challenge to learn a new way of doing things especially for me having just learnt Arsene’s way and now being in the process of learning Unai’s way of doing things. A lot of people have commented on how different it feels, even visually around the place there’s been change.

“Like Arsene he’s a workaholic, he’s always watching film of training or the opposition. He’s never not analysing even in the lead up to friendly games.

“He’s got a very dry sense of humour and is unbelievably passionate and the training sessions are extremely up tempo and full of instructions and hands on. He’s passionate about playing football a certain way and he really wants Arsenal to play that way.

“It’s been great getting to know him.”

With the Gunners set to face Man City on Sunday, let’s hope some of that defensive work pays dividends.

Thanks to @TimSmith85 for the heads up.

The Emery reign starts at the Emery’ates on Sunday afternoon. Upward and Onward.

4th place would actually be like winning a trophy this season

i hope im wrong, but i think fourth place would be a miracle

Exactly what I wanted to hear from the training ground. Gives me some more hope for the season. Can’t wait!

Lets hope we witness some changes in the back come next sunday.
Because it wasn’t that much different than before, during pre-season.
Anyways, I’m starting to think Emery’s “very new methods” might just need a little bit time to take effect. Understandably. I think we shouldn’t rush things regarding the expected performance.
However, until then we should learn how to win even with not-so-good performances. Just advance the club to be a comfortable position for when we finally can implement Emery’s ideas to the fullest.
Ugly wins are required in this stage.
Top 4 spot is a must, this season.

With no TDD feed up (yet, I hope), I feel like I woke up on Christmas day and there’s no tree… Not that we usually have a tree these days.

I look forward to that feed. Even when things were dire, I wasn’t alone. We’ll probably have some departures today and likely no signings but still I would enjoy it as always.

one thing that our players in general need to do and especially our full backs is to stay close to their opponents and not allow time and space to whip in a cross.

perhaps it is because we dont have very athletic players compared to the other top 5 teams or may be our players poor technique/laziness. but this needs to be rectified.

no defensive unit in the world would be able to handle the traffic into our box like we played last season.

There’s only so much as he can do. Anyone expecting him to challenge for the title with the 4.5/10 window we’ve had is in for a shock. Arsenal will never achieve anything decent with the defence we have. 5 CBs and not ONE WORLD CLASS. It’s crazy how Koscienly is probably still our best CB despite being 33 and injured. Leicester are about to sign Soyuncu for 22m. That will make it two of our targets they’ve signed. Evans and Soyuncu for 30m. Yet we’ve spent 15 on Sokratis and are about to spend 20m on Vida. Unbelievable business from… Read more »

You’re right mate it wasn’t just his fault but agenda driven fools will have you believe that.Great to see quotes like this.

Emery being obsessed with the defense is just what we need to hear atm. It was never realistic that the board, especially now, was going to cough up the required capital to get a good centre half. Even if that happened, it would still need a lot of tinkering to get this defense straight.
I don’t expect him to solve things in a day…we’ll probably not witness any visible changes in the upcoming fixtures…but this is a good obsession and hopefully will pay some dividends come November or so.

I’ll take a hit of whatever you’re smoking there, ace. The club bought a very good young keeper; an experienced fullback, a def-mid that was one of the standouts of the recent WC — all players the supporters have been crying out for years. And bought the gem that is the young Hairy French Guy. And on top of that an experienced, bastardly centerback – another player that Arsenal has needed and lacked for years.

Sokratis – average. Has been poor for 2 seasons
Leno – Average. Terrible numbers.
Lichtsteiner – too old. Epl pace might be too much. Don’t mind. On a free.
Guendouzi – young with potential.
Torreira – our best signing.

Good to hear, but probably it will take time for the players to master the new tactics to full extent. Remember Klopps Liverpool defence was all over the place the first season.

Let us be patient and hope Emery can give us a similar boost in a couple of years time!

I do believe we have good defenders in the team. The only problem has been defensive philosophy. Once there is a clear direction, we’ll be better. I see no better defenders in Manchester clubs than ours, for example.

I would take both Aymeric Laporte and John Stones over all our central defenders, bar Koscielny. I do agree that Manure’s defenders are no better than ours.

I don’t like Uniteds centre backs but Smalling is more consistent than most of our defence and Phil Jones and Bailey have a much better blend of aggression and positioning than Mustafi or Sokratis. That isn’t to say I would swap or that our players can’t be coached better, but we have the worst centre backs in the top 6. United also won’t challenge for the title this season but Mourinho would trade in every defender he has if he could. We are not that club. Emery will focus on coaching and evolving our playing style. But it doesn’t mean… Read more »

Stones was a disaster first season (As was Koscielny)

So there is always room for improvement

Laporte, Stones and Otamendi are better than all our defenders except Koscienly.

Stones and Otamendi were poor the season before last just saying. Things can change.

Otamendi is over rated. Stones WAY over rated. Kos seen better days, for sure.
And who the fuck is Laporte? I’ve never once seen him play. You all are pulling these names out of the air, players that are fringe at best, and alleging that they are better than anything we have … ?

Smalling, Jones, Bailly are better than all our defenders except Koscienly

That last sentence is just screaming out for a cutting remark about Kroenke but I can’t be bothered.

The real test of our defense will be in away games, where last year we lost or drew games that we ought to have won. I hope to be pleasantly surprised with a win at home on Sunday, but a draw would also be fine, given the opposition, given the new manager and getting a new system working etc. It was the games against teams outside the so-called top 6 that really harmed us last season.

Well midfield never sustained effort through the entirety of the game. There were efforts to apply high press but they would fizzle out after 20minutes. Partially when playing Jack, he just could not sustain the intensity. Not saying he was the only issue but it just takes one player to drop performance level and the press is not properly synced. Worse it can then be easily taken advantage of without coordinated effort as a huge gap would suddenly appear. This of course not helped by Wenger refusing to recognise and make tactical changes from bench quickly to prop up the… Read more »

I’ve taken the day off work on Sunday. Hopefully this improved defence doesn’t get taken to the cleaners by City, who I hear looked like they mean business.
At least the good thing is, the defence surely can’t be worse than last season.

If you can’t afford a new defender,buy some Duct tape at least.That defense looks really fragile.

and so he should, our defence is like a sieve, and I hope he does away with that stupid man marking

Nothing in pre-season would deem to suggest we have made much significant difference.

Players like Guendouzi still failed to track players into the box, Several times we have been susceptible to crosses delivered in or set pieces with fullbacks unaware of who is around them.

Mustafi has been beaten for pace one on one but so has Sokratis and Holding.

All the ingredients leading to optimism as we head into the opener.

Bit puzzling he let the best (by a small margin) of the 3 young hopefuls out on loan. would have thought it wiser to keep Calum till Koscielny was close to return in Jan. That said, Holding and Mavropanos have one asset Chambers lacks, height. But Holding made a lot of mistakes in pre-season which are conveniently overlooked whereas every small minute mistake of Mustafi is put under microscope forgetting he lead the team in intercepts last season and consistently comes up with massive blocks in front of goal (not to say he doesn’t have flaws) There is a genuine… Read more »