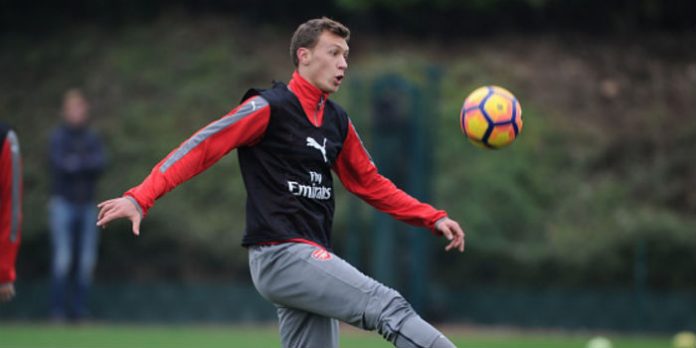 Krystian Bielik is reportedly close to completing a loan move to League One side Charlton Athletic, following an injury-ravaged 2017/2018 season.

Having impressed on loan at Birmingham during the 2016/2017 season, the 20-year-old went on loan to Walsall in January but did not make a single appearance for the club due to a series of injuries.

The Polish centre-back made his Arsenal debut in the 3-0 League Cup defeat to Sheffield Wednesday, following his transfer from Legia Warsaw in 2015, but has yet to make a league appearance for Arsenal and does not appear to be in Unai Emery’s immediate plans.

It has also been reported that Bielik impressed a Middlesbrough scout during Arsenal under 23’s 6-5 defeat to Manchester City on Sunday. We quite like the idea that you can see the good in a defender when that many goals have been conceded.

We’ve a bit of history lending players to Charlton. Alex Song and Francis Coquelin returned from The Valley like new men, while Yaya Sanogo scored a hat-trick for the Addicks and got himself sent off in a short spell. Assuming it gets confirmed, we hope Krystian enjoys his time in South London.

In addition to Bielik, we’re still expecting the likes of David Ospina, Joel Campbell, Carl Jenkinson, Cohen Bramall and a couple of other youngsters to leave in some capacity before 31 August.

Good luck to him. Loads of potential, just needs that big step forward to have a chance.

Honor your name and kindly take care of this mess.?

we need to sell these players, not loan them

I would dare to say he is better than Holding.Why sell him? He was one of the best prospects of our club when we signed him.Just like Dragomir.One didn’t even get a shot.With our def frailties I think Bielik at the very least deserve one Crack..

I know Charlton have done us well in recent years, but shouldn’t Bielik be playing at Championship level? Didn’t Zola even say he was too good for the Championship (or words to that effect) when he had him at Birmingham a couple seasons ago?

One of Wenger’s classic unfinished projects… Is he still a CB? What happened to him being a DM? He’s far too good for the u23s and has proven his ability at championship level, but maybe wouldn’t play every week at a lower premier league club. I had really high hopes and at this age still think he could turn into a good player for us. One thing this system requires is defensive players who are capable on possession. I could imagine him being that cm that drops into the back 3. I could imagine him being the calm presence next… Read more »

Injuries and an unnecessary move to converting him into a DM has damaged his development.

At 16 and a DM, he was pretty close to the first team. His progression began to stall when he was converted (common story).

Charlton have a good record at developing players so he’ll be in safe hands, and hopefully the Addicks will have the sense to play him in his correct position, def/mid.

it seems that nobody wants to buy our players